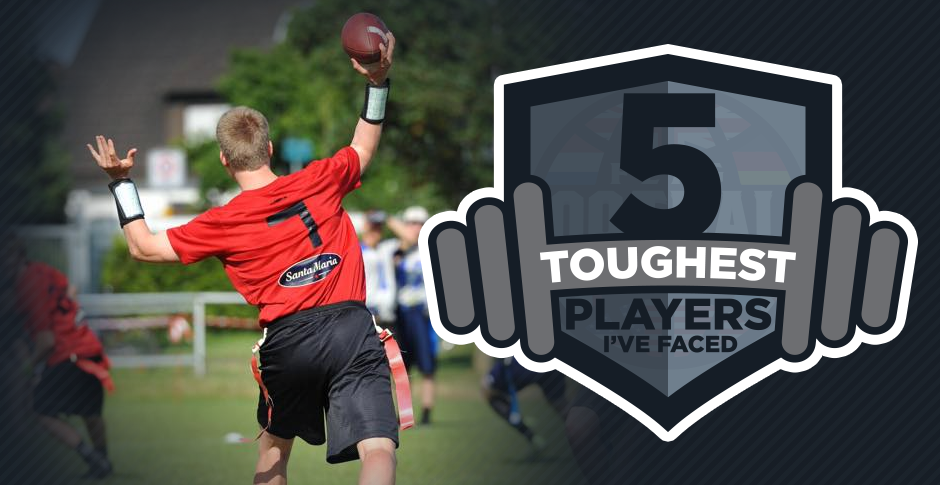 The next player in our seriers of 5 toughest hardly needs an introduction.  He his a a 3 time European champion with Denmark, 2 time Danish champion MVP with the Allerod Armadillos, Big Bowl winner and finalist in the World Championships of 2016, losing by a single point to the USA.  Here is Frederick Lochte Ermlers’ 5 toughest players he has competed against.Mass

Reading through the previous lists of 5 toughest players I could have easily included other Danes, but one other guy deserves special praise for his WR skills. Before playing together with Jon for the Armadillos we faced off when he played for the Copenhagen Scumbags and Copenhagen Barbarians. Jon is easily one of the most athletically gifted players on this list being almost 2 meters tall while having 4.5 speed. During his best years in Denmark he tore up defenses and was basically uncoverable.

I’ve studied Jorge’s game since the World Championships of 2012 when I first started playing flag football and watched tape from the games there. Since then I’ve been trying to implement a lot of what he does well to the Armadillos and Danish National team. I think he’s extremely good at keeping the game simple while still throwing the deep ball exceptionally well. I finally got the opportunity to play against Jorge in the World Championship final in 2016 in Miami. We fell short by just one point and he earned MVP honors.

We played The Mass Flag All-stars at last year’s Big Bowl where we tasted defeat largely due to Romario just running all over us for two halfs. His speed, quickness and general football ability is absolutely insane, and I haven’t seen anyone making cuts with such speed and ease ever before.

I played RT at the world Championships in 2016 where he had joined forces with the usual suspects of the US National team to compete in Miami. Previously, I had watched some video of him playing with Blackout (Texas team) and of course his highlights from when he played for the Longhorns.

In one of the first plays of the final in Miami he caught a 5 yard hook, pulled his signature “dip-move” and took it all the way. Players in Denmark have been trying to implement it to their game ever since. Playing on the same field and competing with a guy with NFL caliber talent was truly a special experience.

Much like with Jorge I have watched a lot of tape on Carlos. I don’t think there’s anything this guy can’t do on a flag football field. He’s pulling flags like he’s never done anything else, catching every ball thrown at him (without gloves) and running the crispest routes, the deadliest one being the post-corner-post.  I know he’s often been called the world’s best flag football player and I think it’s well deserved.

Unfortunately, my only game against Carlos was also at the World’s in 2016. I hope to get a rematch soon enough.