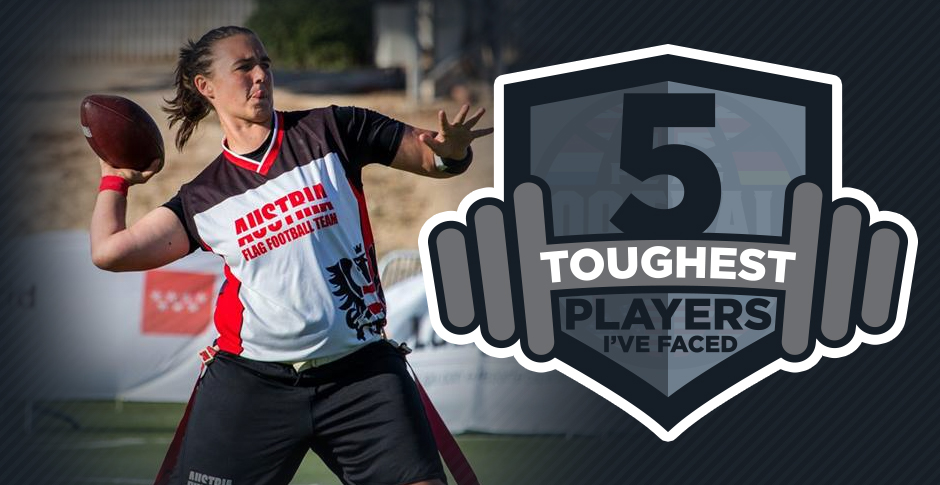 Saskia Stribrny is in FFW’s opinion the best female flag football QB in Europe, if not the world. A 5 time European champion and 4 time bigbowl winner with the amazing Austrian amazones we were interested to find out who are 5 of the toughest players she has came across.  Here are her top 5 –

I have been playing with Marie in the national team since 2007 and against her for about 3 Years (FLL Flag Liga Ladies Austria).  Marie is Probably the best receiver i know –  Great hands, quick routes and is very very fast. She Can score a touchdown just about on every play even if she’s got the whole field in front of her. Marie is a Key Player for Team Austria and its a privilege to play along side her but a nightmare against!

I have played against Georgina a couple of times, the last time being in the 2014 World Championships hosted by Italy. We faced off in the Bronze medal game and her experience shown through,  as we struggled with her speed (much like most of the Mexicans) and it was really hard to get past her alone.

Elisa is key player both on offense and defense…In France she is an Amazing receiver. Elisa has great hands and is extremely fast on defence, being able to cover short and deep.. As a QB you are always fearful with her on the field as she is always there to pick the ball out of the air and sometimes it feels like she’s covering the whole field by herself.

Canada is an amazing Team with a lot of amazing athletes but one in particular is Sabrina with her speed and experience. She is not easy to fool and once she caught an interception on the first or second play of our game in the 2016 World Championships. We turned it around thankfully but Sabrina gives many QB’s including myself nightmares.

I could pick out almost the whole Panama team but I distinctly remember how good Amarelis was! Her sheer speed and athleticism caused us so much trouble. They were deserved winners of the 2016 World Championships in Miami.