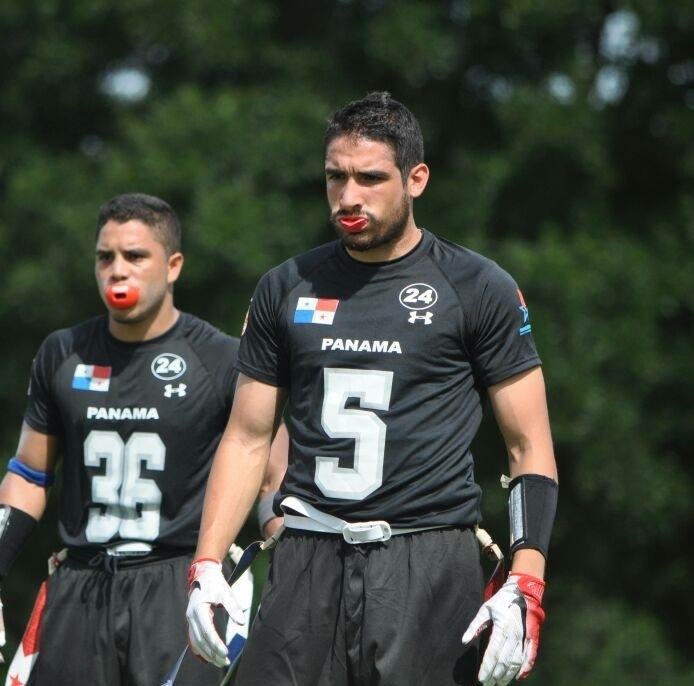 Following a successful World championships were the Men placed 6th and the women took Gold, Flag Football has never looked so good for the Central American country.  FFW spoke with Dennis Allen to find out more about Panama and how they are turning into world beaters.

How did you get into Flag?

I started playing tackle football when I was 12 years old, a lot of players start there, then growing up you start playing flag. In Panama for men, you can play flag when you’re 8 till you reach 12 years old, but then there’s a gap from 12 y/old, to an under 23 league and then the main league. When I turned 16 a team called the Vikings invited me to play and did so for 2 games, I really didn’t liked it back then. 4 years later, a coach invited me to play QB (a position I always wanted to play, because in tackle I played RB and LB) and I accepted. That was 6 years ago, and even though I’m not in that team anymore, is one of the best choices I’ve made.

How long have you played?

12 years, starting from tackle football back in 2006 to playing flag and tackle now.

The thing I most enjoy about flag, and football, is that there is a position for everyone. Everyone has to do something for the team to have success and most of all, even if you’re not on the field, there is a way for you to help the team. Football is the ultimate team sport.

How big is the Sport in Panama?

It’s very well known. I have to be honest and say the girl’s flag is bigger than boy’s flag, because they have better marketing and better structure than the boy’s organization, and the girls have been playing flag since 2002. The boy’s league started in 2005, and people try to support more tackle football than flag. The girls since they do not play tackle, all the support is for flag, and they grow better and faster. But to be fair and honest, both leagues have league sponsors such as Coors Light and Miller Lite. Both leagues are televised by local TV and you could argue they both are top 3 or 4 in attendance for sport events here in Panama.

What is the league structure and how many teams are there?

The Panama Flag League (Boys) has an Under 23 league, with a combine and draft for the new players. The Main League has 20 teams, with an A and B divisions played in different times of the year. Those 20 teams are divided in 2 conferences which play against each other, and the conference champions play in the final game for the title.

The girls have 3 big leagues. The LIFFF being the most important right now. They have an Under 23 and Main League. Structured almost identical to PFL with conferences, only they have 22 teams instead of 20. NFFL only have the Main League of 20 teams. And finally the LFFJ that is Youth Girls Flag, having U10, U13, U15, and U17 leagues through the year.

Who are the current champions?

Are there any big rivalries?

Yes. In the PFL, Outlawz and Horned Frogs played 8 Finals in a row, being tied 4-4 in those contests. Rebels and Cyclons in LIFFF is the most known rivalry, where they have played 3 finals.

How often do domestic teams tend to train?

2 to 3 times a week during the season. Almost no team have off season, but they do have a pre-season.

Who is the governing body for Flag in Panama?

The AFFP, who rules everything from youth tackle, to the adults tackle, to flag leagues.

Do they support and fund the sport well?

The Sport here is all funded through sponsors, which each league finds individually.

How are the international teams selected?

Both men and women have to go through an open combine, where every flag player in the country is invited to participate. 6 Coaches which AFFP selects (after they all have to put in paperwork to be elected as the HC for the National Team) do a 15 round Draft to pick a team. Then those 6 Teams play with each other. The AFFP selects the HC based on what they see in the tournament. And then that HC picks the team based on what he or she saw in the tournament.

How different is the playing standard from the Panama domestic league compared to international levels?

The Panamanian level is good, but I think we can all agree that the international game is on another whole level and you need preparation for that. Another key fact is that in Panama 5 on 5 flag is not really big. We only play it in order to prepare ourselves for international tournaments. In Panama we play 8on8 Contact with blocks, and 3 linemen.

How did the men’s and women’s teams prepare for the World Championships in Miami?

We practiced for almost 7 months, with practices 2 and sometimes 3 times a week. Playing friendly games with local teams. Having meeting with sport psychologists and having mandatory gym training.

There was a large support for both teams in Miami, was it family and friends?

Yes. But some people from the country that head a Panama team was going to play there simply showed and gave support.

How did it feel representing your country?

It was my first Flag World Cup, and I have to say it’s a very demanding tournament, playing 2, 3 or even 4 high level games each day. But at the same time knowing a lot of people who share the same passion and love for the sport. The only words I can only think of are proud and unforgettable.

What were your overall thoughts from the Championships?

I think it was well handled. They were not supposed to be the hosts, but even with a 2 month preparation they gave the teams everything to be comfortable and welcomed. The playing fields were okay. And the physiotherapists detail was really good.

We saw a video of the welcome the women’s team received on their return to Panama; can you speak a little about it?

Panama is a small country, where we don’t have a lot of international success in team sports. We haven’t reached a FIFA World Cup yet. Have never won a Baseball Classic or a FIBA Tournament. So every time we have a Gold Medallist from the Olympic Games or a Boxing World Champion we celebrate. And the girls being our first TEAM winning an international event, was something important here. Local TV gave interviews, they had a really warm welcome in the airport, people invited them to different TV and radio shows, and they had a dinner with the Government. It was a really sweet time in the girls’ sports career, and I was and still am, happy for them.

What is the next international competition planned for Panama?

I can’t really tell. They were planning on maybe going to Brazil for some friendlies, or going to some tournament in Mexico, but is hard to know since we and Guatemala are the only countries in central America that participate on those international flag tournaments. But I am pretty sure, we will be competing somewhere in 2018 for the Flag World Cup.

My goals these years are winning the PFL with my team Gorillaz, we are looking for our first title, and we have a really good team with 4 guys being in the national team that played in Miami. So we are trying to put in all the work and all the effort to dethrone the Horned Frogs, which I respect and admire to be honest. Personally, I hope to have a great season and keep being in a good physical shape so the national team coach gives me another chance to go play in 2018.

If you would like to know more about Panama Flag Football or Dennis then feel free to visit the links below.