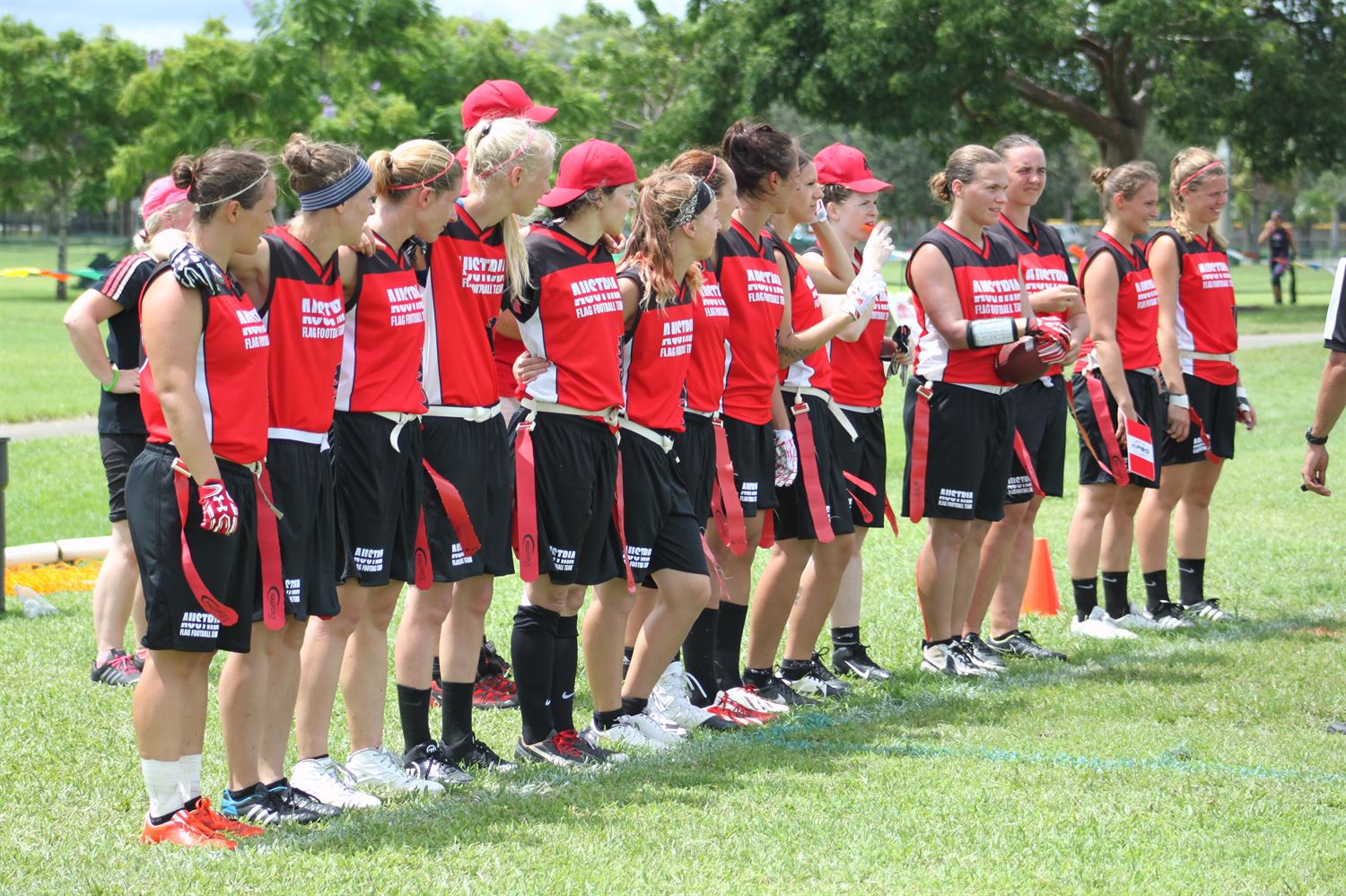 Continuing our countdown to Big Bowl, FFW takes a look at 5-time champions, the Austrian Amazones, who also happen to be the most successful European team at national team level over the past decade.  We asked about how the program began and the success that followed, as well as how women’s football is supported in Austria.

Following the early attempts of establishing an Austrian women’s national team in 2003 and 2005, then Flag Football team manager Wolfgang Geyer tried again in 2007, creating a team to participate in the 2007 Big Bowl.  The Amazones finished 2nd, behind only a strong Israel side in a thrilling final game. Since then the Austrian women’s national team has participated in international competitions each and every year, using Big Bowl as their main preparation for international competitions.

Post-Big Bowl, the team experienced some early struggles, winning only 1 game in the 2008 World Championships. The Austrian women almost didn’t make it to the 2009 European Championships in Belfast due to cost. In the tournament, the young Austrian team lost to two favourites, Finland and Franc,e in the group phase, only to beat the same two teams in rather dramatic last-second wins to earn their first of what are now four consecutive European titles.

The Austrian women continued their fine form by beating Mexico twice for the World Championship Bronze medal in 2010 and 2014, and last year won the silver medal in the World Championships in Miami by defeating Canada.  Until that Semi-Final the Canadian team had not lost a game in international competitions since 2008. Interestingly, only 3 players remain from the 2009 team, QB Saskia Stribrny and her two top-scoring receivers Marie-Theres Michelitsch and Therese Weigang.

After the World Championships in Miami long-time Head Coach and Offense Coordinator Robert Riedl retired and a new coaching staff was set up with the addition of Head Coach Josiah Cravalho, a former US import player and now sports teacher in Austria, and Offensive Coordinator Holly Kellner, who has played quarterback in the Austrian Flag Football League for almost a decade. After the recent open national team tryout, the first since 2007, there will also be a few new players who will play for the Austrian Amazones for the first time in Big Bowl 2017.

FFW took the occasion to ask Defensive Coordinator Walter Demel, who has been with the team since 2007, about the Austrian women’s outlook for this year’s Big Bowl and the 2017 season.

Can you tell us a little about the new coaching staff?

After the retirement of Robert as Head Coach we took the time to set up the new coaching staff and personally I am very happy with the outcome. It was clear to me from the start that replacing Robert with just one person would be hard, so I was trying to get the federation into expanding the coaching staff. This is also part of the lessons learned in Miami that with the limited time between the games you can simply get more done with more people. I am also very happy with the hiring of Josiah and Holly and believe we have a very competitive staff.

You mentioned there was a recent trial; how did that go, and what is the outlook for 2017?

For the most part the team from 2016 has remained intact, which gives our new coaching staff something of a head start, even though the offensive system will likely be somewhat different. There are just 2-3 starting positions where we have to restock and there are already a number of excellent candidates, in part our backups from last year and in part players from last week’s open national team tryout. Over the years I have always tried to improve the team each year in at least one particular area or to become stronger at a particular position, and this year the aim of our new coaching staff is to get faster and more explosive while restocking the roster. Although there is little time until Big Bowl we will now have a 2-day camp over the weekend to get everyone ready to go.

With all the changes and little time until Big Bowl, what do think the teams expectations are likely to be?

It’s a bit of a challenge for us regarding our approach to Big Bowl. On the one hand we would like to defend our Big Bowl title from 2016 and on the other hand it is important for all our players to get valuable playing time so we can evaluate who should be on the final roster for the European Championships. Should we make it back into the finals we would probably play our best 10 until the game is out of reach either way.

What is the current set up in Austria for women’s football and how is development encouraged?

In Austria our players basically played in mixed teams until 2014. That is why we set up the Amazones as a developmental team to participate in the second division of the Austrian Flag Football League back in 2009. Playing against mostly men’s teams has been a tremendous practice over many years but last year we opted to play in the more flexible setup of the FLS fun league, a semi-privately organised league structure in Austria. Since 2015 we also have the official women’s Flag Football League (FLL) which currently boasts 8 club teams.

Is Flag Football introduced at School?

There has been a lot of effort by the federation in recent years to set up a more or less Austrian-wide school league in Flag Football with the aim to get kids into Football, whatever kind. There is one school in Vienna in particular that has had an excellent Flag Football programme for over a decade and where a few of our core players started their careers (e.g. playing in international U13 and U15 championships) at a relatively early age. And then there is a privately organised kids Flag Football programme with a number of teams in Vienna where for instance our Quarterback has started playing as an elementary school kid.

Do Austria benefit from any sort of support or finance for international tournaments?

Apart from Panama and Mexico where Flag Football is really a huge thing we are probably one of the better supported teams with regards to the support from our federation and also public support. Public subsidies can only cover part of the expenses for international tournaments so there is always a financial contribution that players have to make which depends for the most part on the costs for travel.

Finally, what is it you think sets the Austrian women apart from the rest of Europe in terms of talent and skill?

I believe its more a combination of factors than anything in particular. First and foremost, we were kind of lucky to bring together a group of “generational” talents that all started playing football at a very early age. Later we were also able to add more exceptionally talented players over the years so that the team got stronger almost every year. Second, with Robert and me we had two coaches with a lot of experience and with proven winning systems working together for 9 years. Last but not least, we have also had the support from the federation to put in place a year-round training programme including playing in the 2nd division of the Austrian flag football years for many years.

The recent tryout and training camp showed that the women’s league FLL has brought even more talent into the sport and we now have about 20 players that could all play at a high level in the upcoming European Championships. Unfortunately we do not have many female coaches yet, I would say due to the youth of the sport. Club teams are also kind of struggling to find suitable coaches, which is a pity because coaching women flag football can really be a great experience. Thus, we use to have to coach a little bit more basics than we probably would like to do on the national team level, but with the year-round training programme – and it was part of the reason why we set it up in the first place – we can get that done.

Thanks Walter, and good luck at Big Bowl and beyond!

If you would like to keep up with the Austrian Amazones or find out more, you can visit their Facebook page.