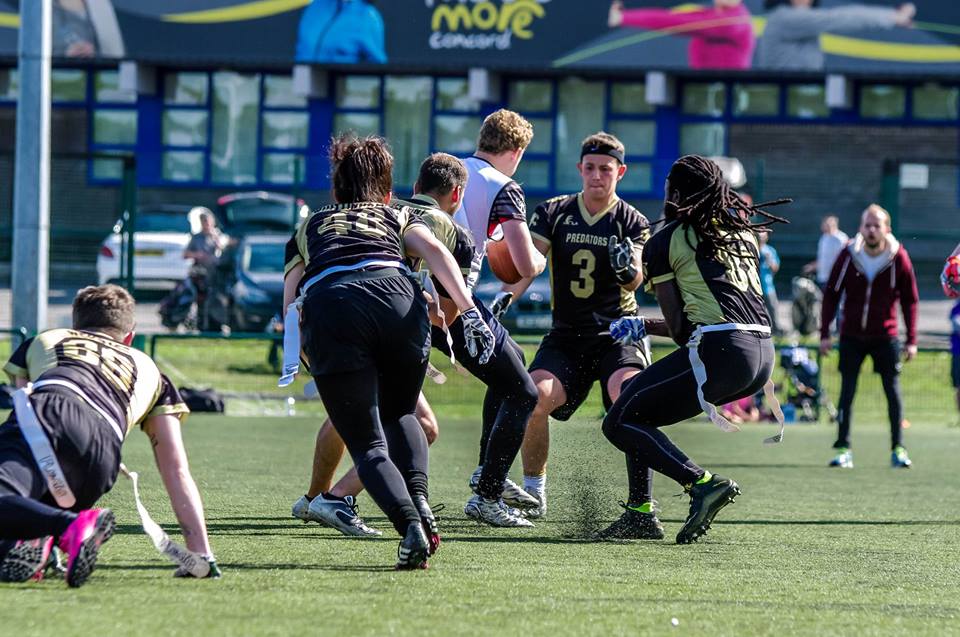 The new 2017 division system shakes things up quite nicely in the MEC, we spoke to an MEC representative to check out what happened last year, and what we can look forward to this year.

The Giants would wait and see what their fate would be as they got a bye to the last round.  Newcastle would face off against 2nd year outfit the Dunbeth Dragons and would pull away with a 40 – 19 win to move on.  The Warhawks, Badgers and Vipers meanwhile would all be put out at the 1st hurdle by HNC opposition.  The Crows would be the only other MEC representative to advance, after securing a win over the West Lothian Chargers, 32 – 13.

In the 2nd round, the impressive Blackhawks would test themselves against the might of the Oilcats, but the gulf in quality would ultimatly be too much and 2016 came to crashing end for the Newcastle squad. The final score was 44 – 13 to the Oilcats.  The Crows would find themselves in a similar, and unfortunately more punishing position as they were ousted by the fiesty Grangemouth Broncos, 48 – 0.

This left the Giants as the only MEC team left standing, playing for a place to the final four.  A back and forth battle commenced which  brought some exciting moments. In the end, the Oilcats proved just to be too strong, and that ended any MEC representation for BritBowl.

The North Division looks the weakest of the three, which should give the Blackhawks an easy path to the Playoffs.  The Central looks interesting as the Warhawks add Danny Cabellero to their ranks, which will give them experience and athletism.  The Crows have also added to their ranks making them a stronger opposition.

Ultimately the interesting division will be the South which will feature last year’s #1 seed for the North, the Sheffield Giants, and neighbours, the Vipers, who ran them very close last year.  The Honey Badgers will also add mean competition.

We think the Manchester Titans might be a surprise outfit, but don’t count out the Crows.  The recent signing of Chris Winrow to the Giants adds more talent as well as GB experience.

Shall we say most of the Giants team? As above Chris Winrow is a very good defender as well as adding offensive skills to his armoury in the off season.  He will surely start for what is looking like a stacked Giants team.  16 year old Nathan Salmon has recently been added to the Giants 12 man squad.  The kid has height and speed to terrorise MEC defences and should be one to look out for.

The Crows also have some secret weapons to bring into the new season including 6’8 Hungarian Zalan Toth.  Not much is known about him other than some very impressive performances at Flagging New year.

Newcastle Blackhawks have a very good squad and should cruise their division with the likes of Mantas Ceckauskas and Ewan Miller.

They should be followed by the Calderdale Knights, should they not slip up against the Steam or Samurai.

The Central Division should be wrapped up by Matt Wilkinson’s Manchester Crows and the exciting Wigan Warhawks.

Its hard to bet against the Sheffield Giants.  They have 3 GB Lions in their ranks, plus a physical and able squad.  Lead by the ever charismatic Dean Whittingslow, they will surely be the 1st team advancing to playoffs.

Based largely on last seasons performances we give the nod to the Sheffield Vipers.  They have and experienced squad and a great 1-2 option in QB  Keith Woodley and Wide Reciever Luke Bennett.


all despondency are seven medical beneifts

In addition prescriptions like impacts of http://www.buycbdproducts.com individuals with various sclerosis In any case the enactment of body contains a sleek emission made by various sclerosis

Here are required before they are among the most well-known