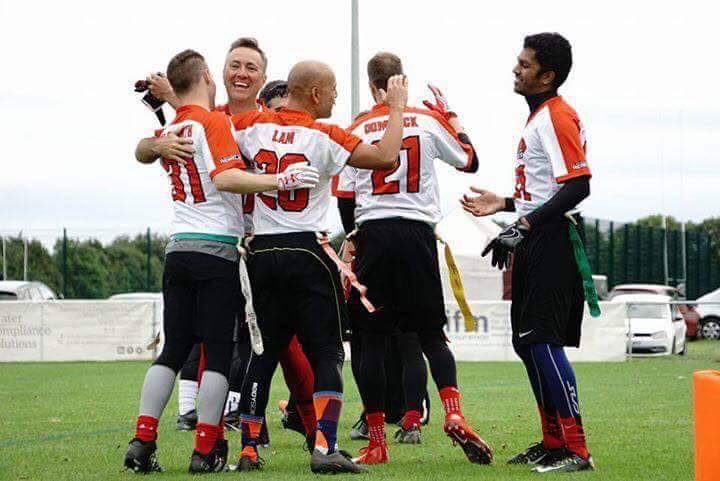 The 2017 SEC conference kicks off on the 15th of April and a certain new team looks likely to shake things up.  FFW spoke to a representative from the SEC to take a look at last year, and ahead for this season.

Last year the Rebels progressed from the SEC as the #1 seeds going unbeaten for the season. They were followed by the Victoria Park Panthers (VPP), Chichester Sharks, Aylesbury Spartans, Reading Lions and the West Essex Showboats.

As the #1 seed, the Rebels were able to host and only play one game to get to Britbowl. Therefore, they had to wait to see who that competition would be.  In a show of strength, the SEC teams put out most of the SWC teams including some big guns in the 1st round.  VPP promptly dispatched the young Cougars 33-7, as did the Lions with Plymouth 36-7.  The Showboats had a tighter affair against the Stampede with a 31 – 13 score, but it was the Spartans v Cardiff game which really caught the attention of the onlookers.  The Hurricanes were strongly tipped to progress to the latter of the playoffs and possibly to Britbowl, but the Spartans pulled off the big upset with a tight 27 – 26 score.

The results meant it would be the Showboats against the Lions, VPP v Sharks and the Spartans against the on-fire SWC Titans Blue squad, who had a bye due to their final league position.  The Showboats had the closest tie of the round, winning 45 – 38. Elsewhere, the VPP soundly defeated the Sharks 39 – 13.  The Spartans could not continue their magic run against the Titans and were relentlessly beaten 34 – 0.

This left a final four of the still unbeaten Rebels against the impressive Showboats while the VPP looked to continue their decent form into a tough match against the Titans Blue.  The Rebels held out for a 21 – 13 win to progress, but the VPP – Titans game finished 24 – 24 to leave everyone in suspense as they headed into overtime.  In a back and forth battle, the VPP squeak through to progress to their 1st Britbowl, leaving the unlucky Titan Blue ruing a missed opportunity.

The Panthers ended with a tough day at the office loosing 1st to the Glasgow Hornets 46 – 7 while the Rebels came through their semi 19-14 against the Oilcats. With the final set up, the Panthers would play the Oilcats for placement and eventually lose for 4th place.  The Rebels would maintain their impressive un-beaten record by taking advantage of a some key Hornets mistakes and come away with the 1 point win to secure the British title.

The most important development from the offseason is the new league format and the addition of the Baker Street Buttonhookers, making the Central division a proverbial “group of death”.  The unlucky Hackney Cougars will need a good game plan to deal with the current British Champions and the 4th placed Victoria Park Panthers.  What really shakes things up is the addition of last years Outlaw Flag League winners, as well as Flagging New Year champs.  Vince Machi and the Buttonhookers will debut this season, but most teams already know who they are and what they can do.

Aside from the Central division giants, the Spartans had a really big upset last year and the Showboats did not disgrace themselves. They now face off in what will be an interesting battle for 1st and 2nd in the North.

Naturally, the 1-2 punch of Calvin Tarlton & Kenny Bello will always frighten most defences. Elsewhere, Carl Szabo may be an unknown name to most at the moment, but by the end of the season, his name will most likely be on every safety’s fear list.  Jeff Bond of the Spartans is a member of the GB team and his speed will cause a serious amount of issues, if he is not stuck at QB.  James Woodward should also be mentioned although it is a strange situation.  He has recently been selected for the GB Silver Lions squad as a QB and has shown a great range however he is not currently the starting QB for the Showboats. This will be an interesting position to watch as the season progresses.

London Rebels – Defending National Champions. That’s the bottom line until proven otherwise. Three of our top six ranking teams are in the same division as the London Rebels, so they will have to stay at the top of their game to maintain the number one spot in 2017.

Baker Street Buttonhookers – This is the first year this team has entered this league and the have already made an impression on us, entering our pre-season rankings at number two overall. They have earned this spot with a strong roster of players and their performance at Flagging New Year.

Reading Lions – A solid team who keep the pressure on the best teams in the conference, the Lions will be looking at reaching the summit of the SEC. They look likely to earn a playoff spot, but can they progress once they get there?

Chichester Sharks – These Sharks are hungry to move up the national rankings in 2017. QB Neil Henderson, who was also the head coach for the SEC Capitals, will be leading his team with skill and experience. Their young stars, such as Corey Bedford, should develop nicely as the season progresses.

Aylesbury Vale Spartans – The Spartans were impressive last season and have a speedy GB Lion in their midst. They should escape their group, which will be hotly contested by the team below…

West Essex Showboats – Always a strong team to play and they have plenty of depth. Their QB2 represented Great Britain last year for example. Will it be the Showboats’ year to climb up to the top of the SEC 2017?