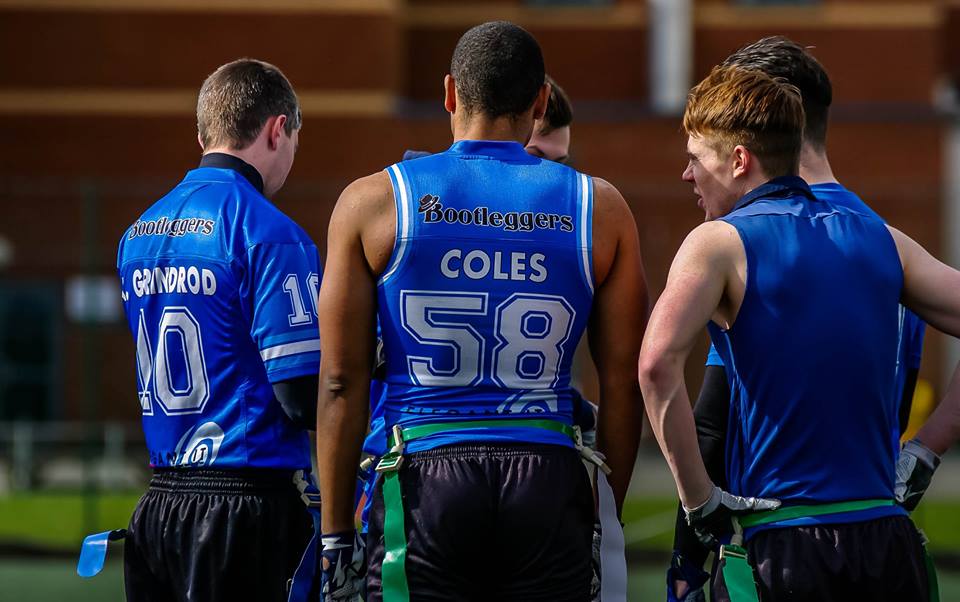 The South Western Conference of the BAFA leagues has produced two Britbowl winners in recent history. Ahead of another competitive 2017 season, we spoke to Jordan Melay to help us breakdown the conference further, and he let us know what to look for this year.

With the new format in place for the 2017 season, we see the SWC split into three divisions (North, Central & South). The North Division sees the past National Champion Birmingham Lions looking for a rebound season against Coventry Cougars Mixed, Coventry Panthers & Northants Titans White.

The Central Division pits last year’s SWC Champions Northants Titans Blue against cross-town rival Northants Phantoms, Leicester Eagles and Coventry Cougars Ladies who will be spending their first season away from the Mixed Side in National League competition.

Last but my no means least, the South Division pits the ever dominant Cardiff Hurricanes against the Hereford Stampede, Plymouth Buccaneers and Merthyr Tydfil Thunderducks who were hanging on the coat tails of the Hurricanes all season last year and will be hoping to topple them this season.  There will also be to addition of the Exeter Falcons who will be a rookie team in the National League but had an impressive showing in the South West Series where they finished strong and will be looking to do the same in the National League.

The 2016 Season saw a tense battle for playoff places which went to the wire on the last game day with the Northants Titans Blue taking the SWC North Crown. An impressive showing on the final game day to go 3-0 took them half a game ahead of rivals Northants Phantoms who had an equally impressive season in which they defeated Birmingham Lions and tied with them in both their fixtures against them. The Phantoms also claimed their first victory in competitive play against their rival Titans Blue.

However a depleted squad on their last game day of the season had a detrimental effect on their division title hopes and left the door open for the Titans Blue to take the crown. Despite having a hold on third place with a 9-6 record the Birmingham Lions ended up having to forfeit which left a final playoff place in the SWC North. This gave the Coventry Cougars, Coventry Panthers & Leicester Eagles a chance to be invited to the dance with a strong performance in the final few weeks of the season.

This opportunity would be grabbed and not let go by the Coventry Cougars who saw this opportunity and decided that no one was going to take it away from them. Being positioned in such a strong division, these opportunities don’t come along very often.

The SWC South ran close but the Cardiff Hurricanes proved too strong for their competition in the end finishing off with a 12-3-1 record. The battle for playoff places ran close however with Hereford Stampede just holding off Plymouth Buccaneers for 2nd place in the division. The Thunder Ducks just missed out on a playoff place despite a strong 2016 season where they hit .500 going 8-8 on the season and have built a strong base to build on for the 2017 season. 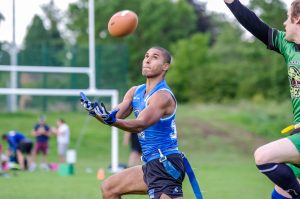 Gloucester Centurions who have decided not to compete in 2017 finished on 6-10 and Northants Titans White ended on 2-14 but will want to prove people wrong in 2017 season after getting their rookie season out the way.
Unfortunately, no playoff teams from the SWC managed to earn a spot in the National Championship with Phantoms falling to the Chichester Sharks, Cardiff lost a gruelling overtime loss to the Aylesbury Vale Spartans, Plymouth Buccaneers in their rookie season were outmatched by experience Reading Lions and Hereford Stampede losing out to West Essex Showboats.

The Northants Titans Blue came close to it but lost in an extraordinary 7 overtime period game to the Victoria Park Panthers after leading 24-12 with 2 minutes in regular time to go. The SWC will want to go out in 2017 and take a least one team to the National Championships this year but will be difficult with such strength on the SEC side of the southern playoffs.

I think after the outcome of the results at the NuOla Spring Shield tournament, the Coventry Cougars could potentially run the Birmingham Lions close to the SWC North. The SWC Central will see another close battle between the blue and red side of Northamptonshire as it was last year. The SWC South will be an interesting one because there are 4 teams below Cardiff Hurricanes that have the potential to shift the power in the South division.

Apart from the teams previously mentioned, there are three teams that will be interesting to see watch and see where they finish this season;
Coventry Cougars Mixed – There performances in the Outlaw Flag League Playoffs this season and also seeing their results in the NuOla Spring Shield show there is real talent on that team. The Cougars could make a real push for the division title this year.
Hereford Stampede – An extremely well drilled team on both sides of the ball from the short sample size seen last year. In their rookie season they posted a 10-6 finish to win their division and two seasons later they potentially have the chance to topple the Hurricanes but if not, it’ll certainly be close.
Northants Titans White – During the off-season they have really come on especially in the last few months and currently hold a 3-0 record in friendly preparation for the new season. The White have a new energy and some new leaders shining through on both sides of the ball in Matt Tibbles & Arden Shaw and will be exciting to see if they can push for a playoff spot in what is a tough division.

Apart from the well-known suspects such as Nathan Coles, Adam Grindrod, Tristan Varney, Alex Salter, Joe Cotterill etc. There is 5 guys that may well break out;

Kieran Eaton (Coventry Cougars) – During the Outlaw Flag League playoffs this year Kieran was an absolute monster, lining up against DB’s double his size and making them pay every time.  This was highlighted by scoring 10 TD’s / 4 XP’s in three playoff appearances including 5 TD’s in one game against the Manchester Crows. Eaton boasts blistering speed, great hands and plays like he is 6’ 6” and is coming off the back of an MVP performance in the Super 5’s competition. He will be looking to carry on this hot streak going into the 2017 season to help the Coventry Cougars battle for a playoff and potentially a division title.
Luke Madden (Coventry Cougars) – Similar to Kieran Eaton who is teammates with Luke Madden, teams are still having nightmares about him. Luke is an automatic tackler and covers so much ground in his pursuit of players which makes him an excellent blitzing option as well as an incredible cover DB. The Cougars are just purely made from fast twitch muscle fibres as a few other Cougars should be on this list. Like Eaton, Madden will want to carry on his current form and bring a division title back to Coventry this season.
Jay Jay Spencer (Hereford Stampede) – Jay Jay has great chemistry with his Quarterback Steve Hall and climbs the ladder like any receiver in the SWC.  He uses his body well to make sure the DB is in no position to make a play on the ball (legally of course in this non-contact league).
Ollie Tibbles (Northants Titans White) – This is Ollie Tibbles’ first season in Senior Flag after lighting up the Youth portion of the sport over the past couples of years. Players will want to keep and eye on him because if you give him any space he will be gone in the back of the end zone before you’ve even had a chance to react. Tibbles moves like he is Wayne Gretzky on ice and has incredible hands to match. He is looking to put up numbers with his elder brother Matt Tibbles throwing him the ball this season.
Connor Melay (Northants Titans Blue) – 2016 was Connor’s first season in flag and he had a monster season which included 22 TD’s & 12 XP’s in the BAFA National League. With a year under his belt and flourishing in a strong Titans Blue offence, people may need to start taking notice of “MegaCon” as there was plenty of times that people slept on him and he dropped 3 or 4 TD’s on them in a game. Connor has the ability to turn a short catch into a long run at any given moment so defences need to be careful they don’t forget his name when they line up against him in 2017.

Some teams will love my early predictions and other teams will hate it but if anyone has any issues with my predictions below, please write your grievances on a postcard and send it to;
PO Box 123
Don’t Care Avenue
Season Hasn’t Started Town
Only Predictions Precious City
Go Out & Prove It Island

I currently have the following finishes for each divisions based on a scan over the fixtures for the 2017 season; 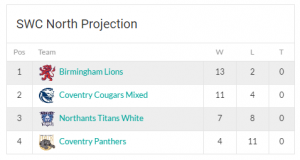 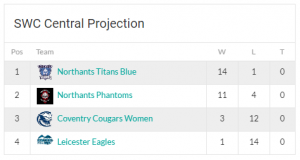 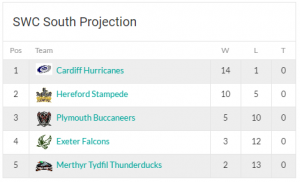 Due to head to head, Cardiff Hurricanes take the #1 Seed in the SWC over the Northants Titans Blue with the Lions coming up just behind taking the #3 Seed. The Cougars, Phantoms & Stampede all have dominant showings to sew up the #4 – #6 Seed. However, there is still a lot of football to be played and anything can happen, any given Sunday and all that jazz.