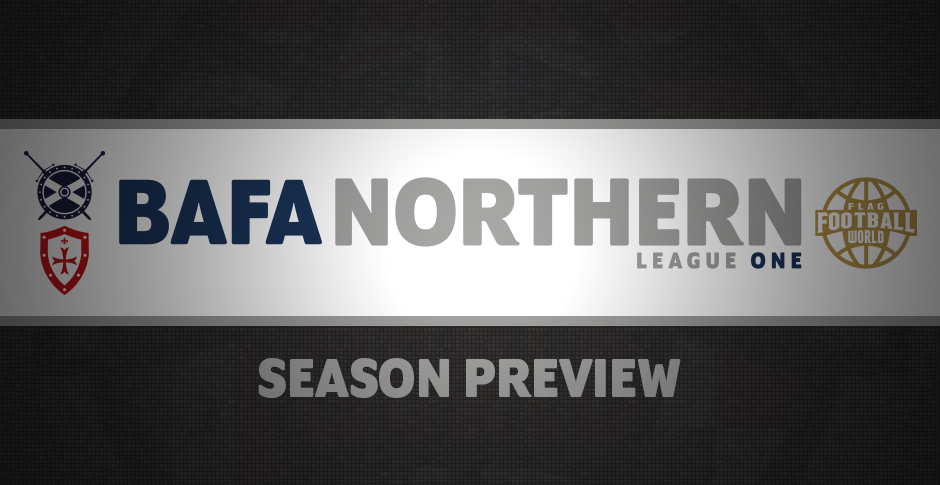 Division One North, now League One North, had three teams earn promotion to the Premier Divisions, while two MEC sides were relegated. Today we look ahead to the three Northern divisions and how they’re looking for the season ahead!

In the HNC, Carnegie Flag Football ended their reign of destruction once they earned automatic promotion. Behind them they leave the Aberdeen Silvercats, Glasgow Killer Bees and Grangemouth Colts; these teams are the development sides of the Aberdeen Oilcats, Glasgow Hornets and Grangemouth Broncos respectively. Joining them are the Midlothian Sabres, Renfrewshire Raptors (FKA the Paisley Spartans) and the West Lothian Chargers, who return after a year out of the league setup.

The MEC lost the Honey Badgers and Revolution, but they’ve been replaced by the Newcastle Blackhawks and Leeds Samurai. The MEC West Division sees the Oldham Owls, Cheshire Cavaliers, Chorley Buccaneers, Wigan Bandits, The Warrington Revolution Cogs and Wirral Vikings try to earn a promotion opportunity.

Meanwhile, the MEC East has picked up both the relegated sides. To bounce straight back up, they’ll need to contend with the Nottingham Bears, Sheffield Vipers Orange, Rotherham Roosters and Leeds Ronin. This is a tough division, but two development sides should ease the pain a little, but the battle of the top is bound to be full of fireworks.

Starting with the relegated sides, the Newcastle Blackhawks finished dead last in the MEC Prem after a disappointing season, only one after they’d won the MEC division title. The Leeds Samurai earned a stay of execution on the last day of the season, but lost the relegation playoff to the Warrington Revolution. Both the Honey Badgers and Revolution absolutely dominated the MEC, so we’re excited to see who can step up.

In the HNC, Carnegie were the big bosses of their division as they stomped their way to the Division One championship final. Behind them, the Grangemouth Colts and Silvercats could only be separated by half a game as the Colts went on the promotion playoff, which they lost to the Comets.

Well, yes, and in a big way. The promoted sides from the MEC leave behind a number of hungry challengers, while the HNC has had a dress rehearsal in the past few months, as friendlies and the Carnegie Winter League has given us an idea of how things should pan out.

We commend the league committee for having the bravery to put the Newcastle Blackhawks and Leeds Samurai in the same division, the MEC East. As much as this sucks for the other sides in close geographical proximity, they’ll have an opportunity to impact what should be a hotly contested promotion race between the two teams. In the MEC West, it’s anyone’s game, as whoever wins the division will be guaranteed a chance at promotion. 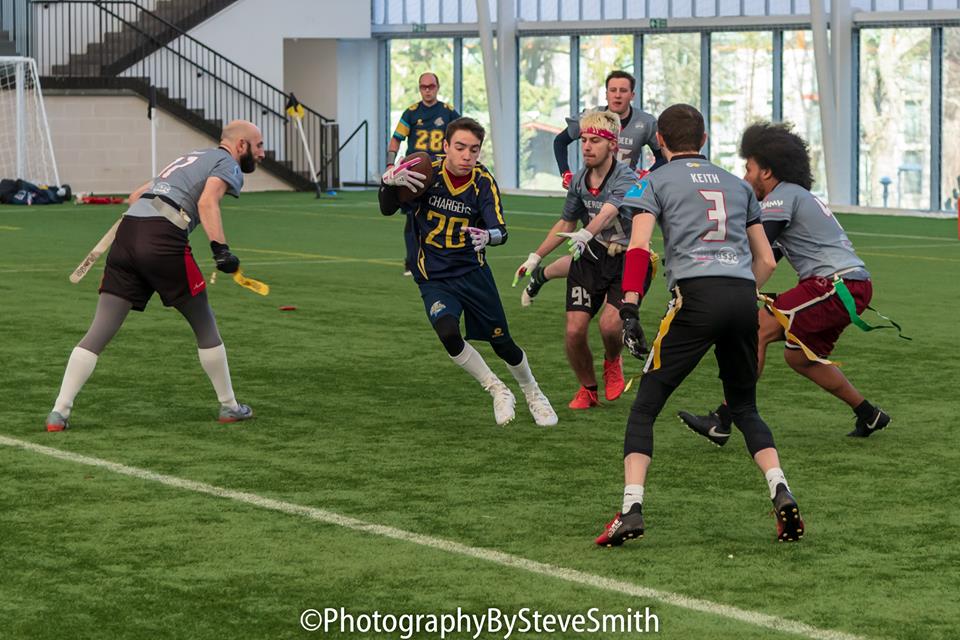 In the HNC, the Aberdeen Silvercats have been the toast of the town, as their Winter League victory showed how far they’ve come in one short season. The Raptors have undergone a full rework of their organisation, and have swelled in size. However, will that bring success? The team we feel that should really be feared is the Midlothian Sabres. They have quietly recruited some athletes to couple with QB Jared Armour, who has the arm to take advantage.

But what about the Grangemouth Colts, who were so close last year? They’ve looked a little lost during the Winter League. Granted, this has been without a number of their top players for many weeks. This lack of preparation could hurt them going into the season however, as the Silvercats, and even the Glasgow Killer Bees managed to score routine wins over whoever suited up for the Colts any given week.

The MEC East will obviously be dominated by the Newcastle Blackhawks and Leeds Samurai. There Rotherham Roosters and Nottingham Bears should do well against the development sides around them, but they’re going to face an uphill battle against the recently relegated teams, especially the Blackhawks who have some big names returning in their promotion bid.

The MEC West is going to be a bloodbath, but we’re going to hitch our wagon to the Oldham Owls and Wigan Bandits. The former just needs to get a consistent number of players at their game-days and they should be able to roll through their schedule. The Wigan Bandits have some pedigree and and their win at Valhalla Bowl against several division-mates should set them up well to push for promotion.

Stay with us now, there’s a lot of guys to be excited about.

Cameron impressed us at the Winter League as a two-way star for the Silvercats. He’s got great speed and hands, and for us, is the most consistent performer on an excellent side. Don’t be surprised to see him take some snaps at QB either…

We’re not expecting the Chargers to make a lot of noise this year as the HNC seems to be getting stronger and stronger, however we’re sure that Brandon will continue to be the main man for the team. Suiting up at QB, he’s got his wings clipped a little, but when he gets an opportunity to spread his legs, it’s difficult to get him pinned down. He’s also got excellent tracking of the ball in the air on defence, and blitzes with great effect too. He’s the switchblade of the Chargers, and will earn some admirers this season.

After a year out of the sport, the former Glasgow Hornets and Blackhawk returns to the side in their hour of need. Mike was a member of a star-studded roster two years ago, and figures to have even more success in Division One – he’s an early MVP candidate in our eyes. He’s got outstanding hands and is a reliable target for the Blackhawks. He’s also got hips that will send would-be-tacklers reeling.

The Owls had a season to forget in 2018, as they had limited success in terms of results. What wasn’t a failure, or indeed a surprise, was the emergence of Robert Welti as the star man for the Oldham Owls. His athleticism and ability got him into the endzone 22 times on offence last year, and twice on defence. With another year under his belt, he’ll be a big reason for the Owls taking flight this season.

In the HNC, we see it being a two horse race between the Sabres and Silvercats. This feline fight is based off what we’ve seen in the pre-season. We’ve got the Killer Bees and Colts just a step behind, but wouldn’t be surprised if either broke into the promotion race.

In the MEC, we’ll take the Wigan Bandits in the West, with the Owls pushing them close. The East is going to be between the Blackhawks and Samurai, but if you made us choose now we’d go with the Samurai. They had a fantastic Sunday at Flagging New Year, and that Kyle Taylor to Jonny Dudley connection is the most potent in League One.