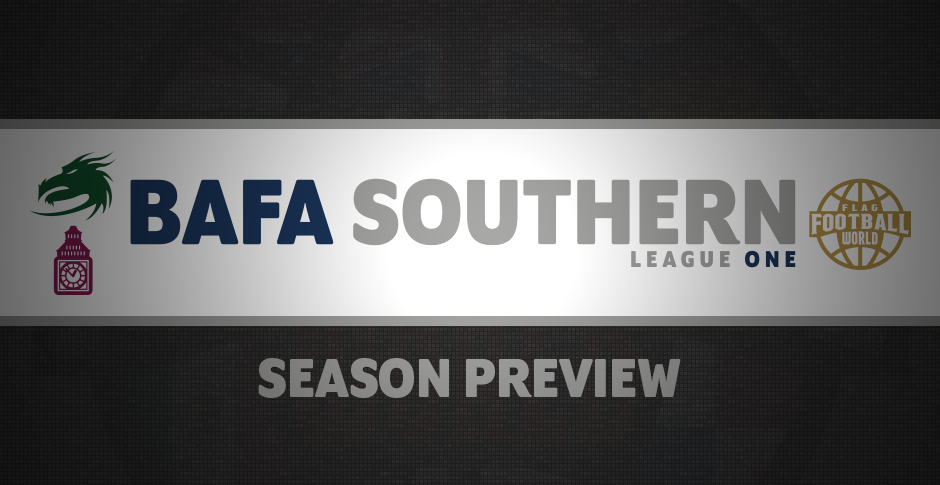 With the sport growing and growing, we’ve got a lot of moving and shaking in the Southern League One divisions! Here’s where things stand ahead of the season!

We’ve got four divisions within the conference now, as flag football is really exploding in popularity.

The South West A looks fairly similar to the South West Division 1 from 2018 with the Swindon Storm, Exeter Falcons, Swansea Hammerheads and Plymouth Wolverines (formerly Buccaneers) returning to the league. The addition of the already impressive Gwent Gators and Weston Supers completes the South West A and will make for some interesting games. You can get a preview of how things will go by paying attention to the South West Series…

The South West B has some more familiar faces, with the Hell Hounds, Reapers, Knights and Wolves returning. The latter are entering two teams this season after a successful OFL campaign with the split. The only difference to this division is inclusion of the newly relegated Chichester Sharks who will be looking to put a disappointing campaign in the SEC Premier behind them whilst aiming for promotion.

Heading towards the East, we have the South East A division which consists of the same teams that competed in the South Mid Division 1, with the additions of the Coventry Cougars and the Lincolnshire Longhorns, who will be plying their trade south due to the overpopulation in the MEC.

Rounding out the League One South is the South East B Division which features the newly formed London Flash, who are products of the London Smoke, the already battle tested Leighton Steam, and the Outlaw Flag Gunslingers who consist of a large number of ex-Northants Titans as the Outlaw Flag League tries to break into the BAFA circles with their own side. Joining these rookie teams will be the veteran Ware Wolves and the London Lucky R’s.

Last season saw the creation of the Division 1 structure and was split into 3 divisions (South West, South East & Mid-South). The South East & West divisions were fairly straight forward with the London Smoke and Tydfil Trojans destroying the division competition to the tune of 12-0 and 10-0 records respectively. The Mid-South was fare more contested, as there was a number of teams who were competing for the crown. It would end up coming down to the final two game days, where the Northants Titans White (11-1) would come out victorious.

The Bedford Blackhawks would earn the final spot in the Southern side of the playoffs after finishing 9-3 ahead of the Coventry Panthers.

London Smoke and Tydfil Trojans would earn the automatic promotion places with the Blackhawks and Titans White earning the chance to be promoted to the Premier Division. They both delivered, as they beat the Birmingham Lions and Chichester Sharks respectively.

The South saw four teams earn promotion from last season, so we’re bound to have some fresh competition for the top places.

The South West A Division sees new boys Gwent Gators looking to cause problems; they have already shown their capabilities in a number of friendlies in the off-season and we can envisage them running the Exeter Falcons close.

The South West B will be an interesting division and could potentially be one of the most competitive in League One football this season. This could the year that Southern Reapers make a statement after falling to 4th in the South East Division 1 last year. With their experience in the second tier of football, they could have the leg up over the Chichester Sharks.

The South East A will likely be dominated by the recently relegated Coventry Cougars team who will be a difficult task for all they face this year. Their downfall in the Premier League last year was their lack of depth, taking 5/6 players to every game day which is difficult at the best of times, let alone against some of the best teams the UK has to offer.

Finally, South East B division will see some power shifts with the 3 rookie teams taking control of that division with the Outlaw Flag Gunslingers already boasting some serious talent as a result of their recruitment.

There is quite a few teams to keep your eyes on heading into the 2019 season;

Weston Supers – The newly formed Weston Supers are one to watch as they head into their rookie season in the BAFA South West A Division. They’ve already picked up some eye-catching scalps, picking off the Exeter Falcons and Swansea Hammerheads in impressive fashion. However they did lose out to the other rookie team in their division in the Gwent Gators.  The Supers will be well prepared for the season with signal-caller Matt Keyse performing solidly in the pre-season, picking out his favourite targets such as Jacob and Sam Matthews. We’ve got them making a strong impression in their debut season.

Outlaw Flag Gunslingers – This might be an obvious one if you’ve seen the signings that the Gunslingers have acquired since starting up late last year in Northamptonshire. The most recent signing caught our attention, as former Northants Titans and SWC Dragons QB Adam Grindrod will be returning to the game. Last time Grindrod saw the field, he led the Northants Titans to the cusp of the National Championship semi-finals with a banner 2017 campaign. Complimenting the Gunslingers’….gunslinger are offensive talents such as GB Silver Lion Nathan Coles. It’s not just former Titans in the pack though, as former Coventry Panther Pat Lane has hooked up with the Outlaw side. We expect them to make a strong push for promotion early.

Rugby Raccoons – Looking back at the table in 2018, you would think we’re crazy for saying that the Raccoons are one to watch after their disappointing finish at 3-9 last season, but an impressive Outlaw Flag League campaign in the back end of 2018 saw them finish that season with a record of 6-2-1 with a good run into the Plate Playoffs too. They are progressing well since their rookie campaign in 2018, and will look to make the next step in 2019. With the experience of Marcus and Luke Gambrill and playmakers such as Sam Prosser and Shai Tailor, they’ll be looking for a stronger sophomore season

Luke Madden (Coventry Cougars) – We’re huge fans of Luke Madden and his play over the last few years. He gives opposing teams nightmares. While not always his team’s main threat on offence, he just makes things happen when he has the ball. On defence, he is an automatic tackler and covers so much ground which makes him an excellent blitzing option as well as an outstanding cover DB. Luke will be a big part of the reason why we believe the Cougars will earn themselves an automatic promotion place in 2019.

Adam Russell (Southern Reapers) – After a down year in terms of results, the Southern Reapers will look to take over the South West Division in 2019, and one of the main reasons for this will be Quarterback Adam “Chewy” Russell. He possesses one of the best deep balls in Division 1 and has shown flashes of dominant QB play. We feel 2019 is when he turns the corner to lead the Reapers to the division title. Russell is an early MVP favourite in our eyes.

Aaron Mann (Buckinghamshire Wolves) – Possibly one of the most electric players in the whole of the U.K., as he manages to find paydirt in a variety of different ways. He will be a big part of the Wolves’ campaign this season which will see them challenge in a competitive division. His speed and elusiveness are a huge problem for defenders as they never seem to be able to take his flags. Mann’s big YAC ability will have teams fearing him this year.

Here we have our awfully specific predictions for the upcoming year. We’re bound to be incorrect, and there’ll be some left upset by this, but as always, it’s up to you to prove us wrong.