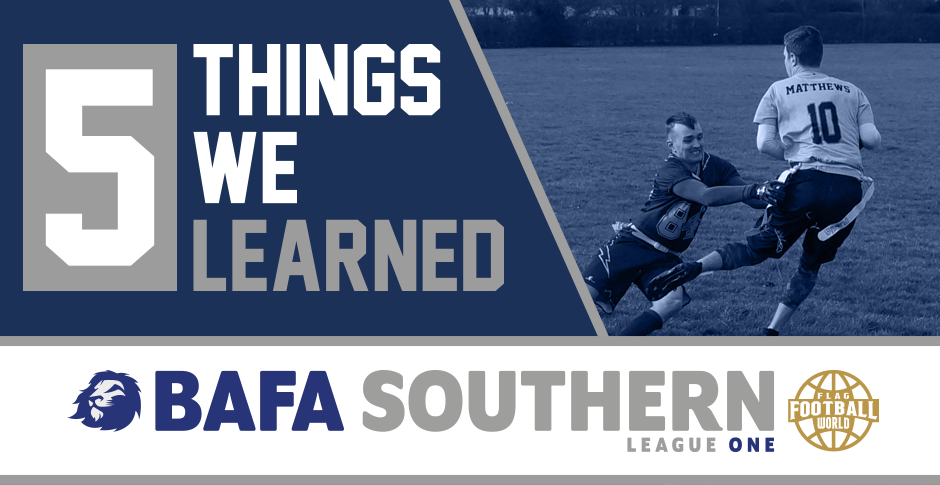 The Exeter Falcons have taken firm hold of the lead in the South West A Division after a shut out of the Swansea Hammerheads (14-0) and a dominant display against the helpless Gwent Gators in a 32-6 victory. This keeps them ahead by one game of their next closest challengers in the Weston Supers, who after an impressive defensive week one, opened the floodgates on defence, conceding 59 points. The most surprising of that tally came at the hands of the Swindon Storm, as they sunk to a 39-26 defeat. Fortunately for the Supers, they took the head-to-head early on against the Gwent Gators and gave the Swansea Hammerheads a strong hiding in their first fixture of the season. This will be an interesting battle between the Supers and Falcons; we don’t get their first match up-until June. Schedulers be damned.

We picked out that the Reapers vs Sharks would be the one to watch in Week 2 and it did not disappoint. From all accounts this was as close to a chess match as could be with Reapers taking advantage after a 19-13 victory to lead the South West B. They added to their win tally with a strong performance against the Reading Knights. They’ll have another challenger in the Buckinghamshire Wolves 1 who bounced back from an opening day defeat to the Reapers to win 4 straight to sit in 2nd place, tied with Chichester Sharks. What looked like a clear two horse race has suddenly became a triple threat battle!

I think the general consensus would be the Coventry Cougars would be the favourites to bounce back to the Premier League in a favourable division. They show no signs of slowing down with a loaded squad which we haven’t seen from them in seasons past since they split. They stay perfect with a 5-0 record and they are handily dispatching teams in their path, having beaten everyone in their division ahead of the cross conference games next weekend. They’ll face off against Leighton Steam and Ware Wolves next!

We predicted that the Leicester Huntsmen would be a strong opposition for any team this season. Before a ball was snapped we saw a 7-8 record for them. So far they’ve been helpless in their division, picking up only one tie so far against the Coventry Cougar Ladies. They’ll be hoping that the cross-conference games will be a turning point for them in their season but we don’t think that’ll be the case, especially when they face off against the London Flash and Outlaw Flag Gunslingers, both of whom look like the class of their  division. The only possible route to their first victory we can see is the London Lucky R’s, who forfeited in Week 1.

Plymouth Wolverines are the latest team to ruin a weekend of games by forfeiting two games. This is become a real problem in the south in particular it feels. They’ll be under the watchful eye of the committee going forward. Conveniently, the Wolverines also succumbed to two losses in week one – have they just given up already?