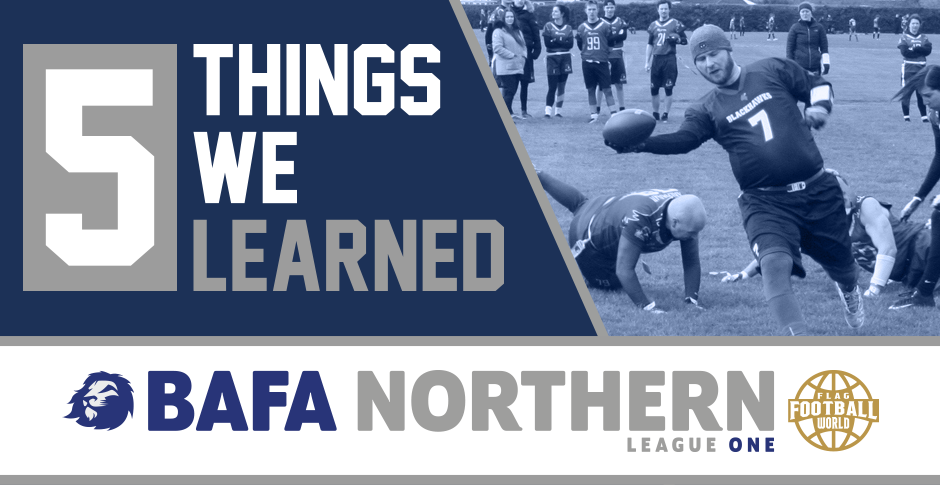 We were always nervous about throwing the Owls in as one of the top teams in the division. That prediction looked certainly logical after an undefeated start to the year. Since our last update we’ve seen them drop three games – one in cross-conference play to the Nottingham Bears, a top-of-the-table clash against the Wigan Bandits, and finally a shock loss at the hands of the Chorley Buccaneers.

Meanwhile, the Wigan Bandits have taken over after coming through the past two game-days unscathed. They’ve been comfortable in all-but-one game, and look to be destined for a shot at promotion at the very least.

Both teams round their seasons out with games against the Newcastle Blackhawks and Leeds Samurai, who themselves will be fancying themselves for promotion, and playoff seeding.

There’s a new leader in the clubhouse in the East also, as the Newcastle Blackhawks survived several scares to climb to #1. A four point win over the Samurai was one of the more comfortable results they’ve scored lately – 1 point wins over both the Rotherham Roosters and Chorley Buccaneers have our nails ground to dust. That win over the Leeds was particularly big – they’ll rematch on the 30th of June, and if they can secure the double then they’ll be all but assured the top spot in the toughest division in League One.

They can’t keep getting away with it…

Another pair of game-days, and two more days of heart-attack inducing football from the Glasgow Killer Bees…

Starting with their exploits in the Sabres’ back garden, they found themselves down double digit points to the hosts. In the longest first half in recorded history (no, you don’t stop the clock for incompletions outside the two-minute warning) the Bees managed to wheedle their way back to within a score before intermission. In the second half their defence looked much more assured EdPillen in Nederland, and an expertly executed drive inside two minutes to go gave the Bees the two point lead. There were scenes as a contact foul on fourth down as the clock expired gave the Sabres another chance, but the Bees held firm. 48-46 was the final score.

Their second game against the Colts was similarly unconvincing, a 20-13 win followed that epic shootout, as the Bees again had to claw back from a deficit.

In Grangemouth, the Bees took on the Silvercats and Raptors. They had the ball and a one-score lead with under 2 minutes remaining on the opponent’s four yard line after an interception. A miscommunication and mishandling of the football gave the ball right back to the Silvercats. The defence held out, closing a narrow 20-14 win. Things looked like smooth sailing against the Raptors – a three score lead at half time clearly went to their heads as the Raptors came back to within touching distance. The Bees just escaped with their undefeated record intact, and are two games away from sealing the division (by virtue of H2H over the Sabres). They can do that with a pair of wins against the Colts and Chargers.

Their red-hot form might be a little too late, but the Midlothian Sabres have been one of the most improved sides we’ve seen this year. They’ve got three losses on their record – the biggest margin being 7 points against the Killer Beers, a game where they elected to go for a 2XP for the lead instead of tying it up before the Glasgow side picked up an insurance score.

In their other contests, they’ve laid the smackdown on just about everyone. Their runaway performances early in games rarely allows the opposition much time to adapt and catch up. This was punctuated by a 80-32 (!!!) win against the Renfrewshire Raptors on home soil. James Grubb is an early MVP candidate as things stand, as the talented receiver has unbelievable chemistry with QB Jared Armour.

A pair of wins over the Silvercats and Chargers at the next set of games should have them locked into the promotional playoff, barring disaster.

The Leeds Ronin became the latest team to shake the goose-egg after a victory against the Sheffield Vipers Orange. In development vs development action, the Ronin held their nerve to secure a 34-27 victory. They can double their win total at the next set of games as the two teams face again!