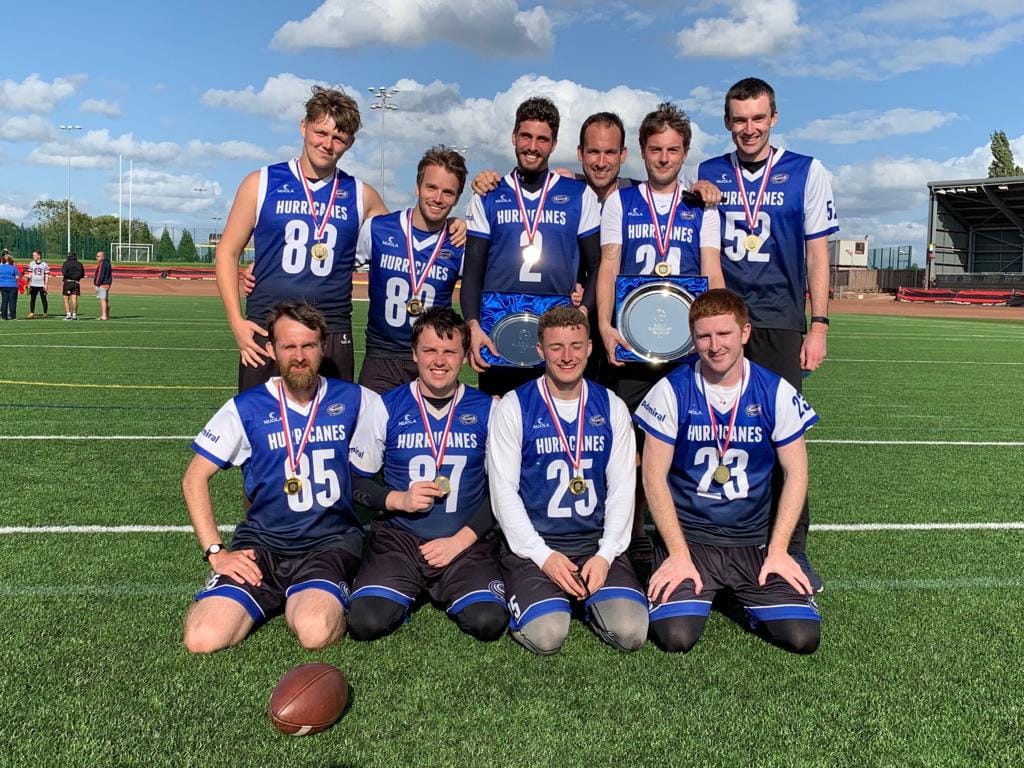 The UK Flag Scene reached its exciting conclusion this past weekend in Manchester, with Saturday seeing us crown our national champions in both the Premier Division and League One! On Sunday, a promotional playoff took place, and the Plate championships were played out! Here’s how it all unfolded…

In the Premier Division, the opening exchanges didn’t throw up any real shocks. The tie of the first round was arguably between the Hornets and Cardiff Hurricanes. The Hurricanes came through in the clutch, with two TDs coming on fourth down, and another to end the first half with a 13-6 lead. The Hornets on the other hand were wasteful, and succumbed to a 26-19 loss.

The Broncos and Buttonhookers advanced in comfortable fashion, but the London Smoke were made to sweat by the Manchester Titans. With a three point lead and the ball, the Smoke launched a deep pass on 4th down which fell harmlessly to the turf, only for a questionable pass interference call to be made, giving the Smoke the downs to run out the clock.

In the semis, the Smoke finally toppled the Buttonhookers with an expertly executed scoring drive. They left the SEC champions with less than 15 seconds to make a play, which they couldn’t connect on. In the other tie, the Hurricanes seemed to have the game in the bag with a two score lead, but a late rally from the Broncos put them within 5 yards of tying the game up. The Cardiff defence stood strong, while the offence managed to run the clock out to seal their final berth.

We were guaranteed a new Britbowl champion! The Hurricanes started on offence and scored through Chris Jones, but the Smoke answered back. It was a blow-for-blow contest, when an interception from Joe Cotterill midway through the second half on the goal-line let the Hurricanes get some breathing room. In the dying moments, Rhys Jackson returned a pick for a score to seal the deal for the Hurricanes as they claimed their second Britbowl title!

Our MVP for the game was Joe Cotterill, who wasn’t stopped on offence (other than by the clock). His interception was the game-breaking moment his team needed in a huge spot.

Predictions be damned in the BAFA League One playoffs! In the first round  Leeds Samurai were downed by a point against the Weston Supers, as our favourite crashed at the first hurdle. The Southern Reapers advanced as they squeaked a one point win against division-mates, the Bucks Wolves. The Coventry Cougars mauled the Wigan Bandits, while the Gunslingers destroyed the Killer Bees.

The Reapers were upset in the semis by the Supers, 45-38, while the SMOG handled the Cougars with ease. In the final, the five-man Supers side took a two score lead against SMOG. The Gunslingers came roaring back to tie the score up and send the game to overtime! The Gunslingers were intercepted on 4th down on their first drive, while the Supers were able to punch the ball in from short distance to win the second ever League One championship!

Not enough credit can be heaped on the Supers for their efforts. Every player played every down in three games, and they deserve immense credit for their accomplishment! Sam Matthews picked up the MVP for his performance in the final!

In the plate playoffs, the London Rebels overcame the Vipers and Blackhawks to make the final, while the Victoria Park Panthers defeated the Oilcats and Aylesbury Vale Spartans. The final came down to the last play of the game, where Calvin Tarlton found Kenny Bello for the game-winning score!

The League One plate was consented between the Reading Knights and the Chichester Sharks. The Sharks rallied from a half-time deficit to take an early second-half lead. They got a huge stop, before a TD run from Corey Bedford gave the Sharks a two score lead. They held off the Knights to seal a 45-42 win.

In the only promotional playoff game of the season, the Midlothian Sabers handled business against the Edinburgh Outlaws. The Outlaws were stopped on the first drive of the game, and couldn’t keep up with the potent Sabers attack. The Sabers will be playing HNC Premier Division football next year, while the Outlaws will take their place in League One.