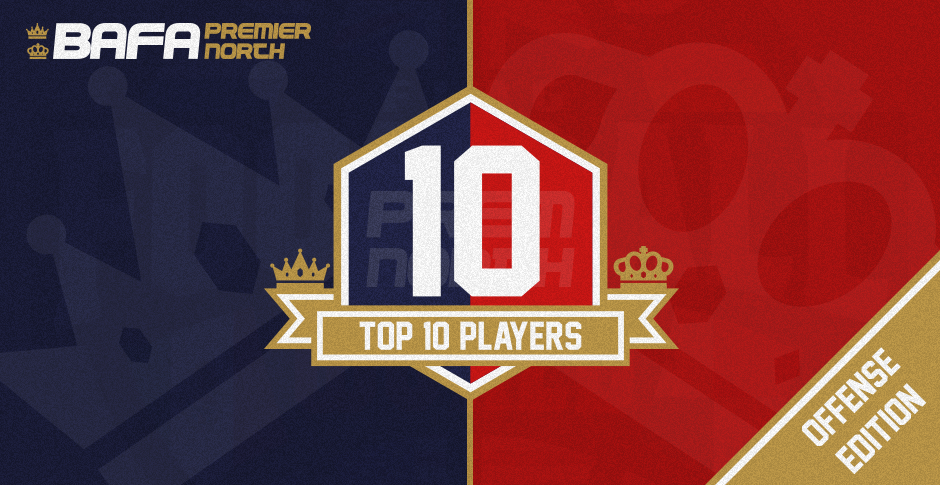 After breaking down the top 10 QBs, it’s time to shine a light on those making the catches and tacklers miss on their way to the end-zone! Here’s the top 10 offensive players in the Premier North Division!

Grant has been on fire so far for the Hornets, with 10 TDs in 4 contests. Against the Broncos, he was seemingly uncoverable, as he scored on 4 occasions. This is against the sides who know the damage Grant can do, so we’re excited to see how he performs against the MEC sides who’ve yet to be stung by the Greyhound. There’s lots of mouths to feed in Glasgow, but Grant has been feasting this season.

Gary has had an awful start to the year, scoring a paltry 9 TDs and 5 XPs. Okay, those numbers are still awesome, but it’s a slight downturn for the standard Gary is usually at. The higher level of competition could have something to do with that, but so is the QB quandary the Oilcats faced. The Aberdeen side have settled that now, and Gary figures to keep high in the ranks as the season marches on.

Daniel has exploded onto the scene in the MEC with a ridiculous 11 TDs so far this season. Regardless of who’s under centre, the rookie receiver has been productive and found the going easy so far. If he can keep up this pace, he’ll help the Vipers survive in a difficult MEC.

Mantas took his talents from Newcastle to Sheffield during the offseason, and he hasn’t missed a beat. With superior talent around him, the new recruit has looked right at home in the Giants lineup. With plenty of mouths to feed in Sheffield, will Mantas be able to keep this pace up? We wouldn’t bet against him!

Greg has been an excellent addition to the already stacked Aberdeen offence. He’s got a safe pair of hands, but it’s his speed that shines. For his relatively short time in the game, he has the poise of someone with years under their belt, and has been relied on heavily this year. His presence in the lineup has provided a spark for the Oilcats.

Rounding Out the Top 10