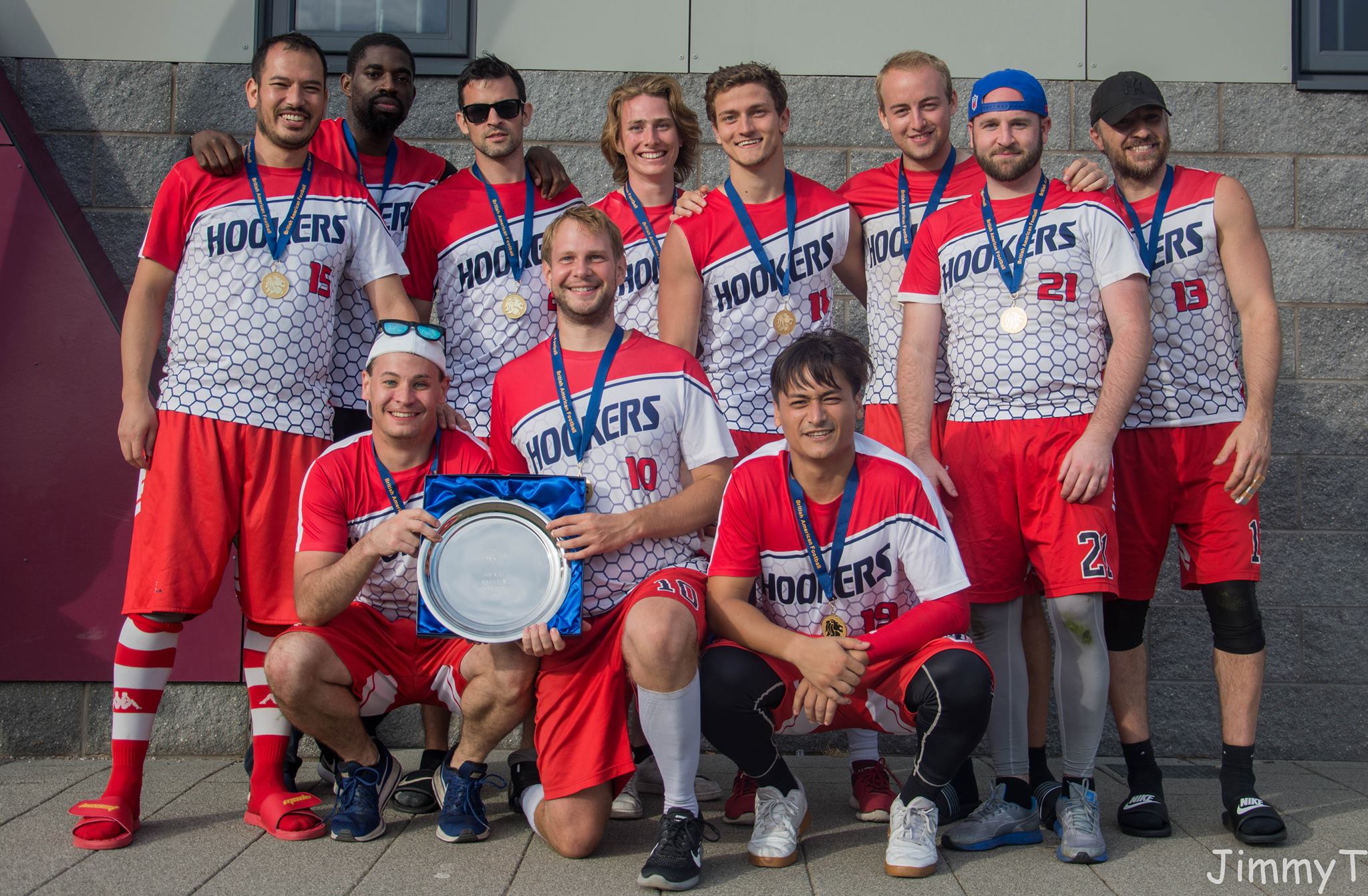 After all the dust has settled, we’ve got our top eight teams heading to finals day on the 17th of August! There’s a lot of familiar faces, but some new ones as well. Today we’ll look at each first round match up, and each team in focus on what their credentials are!

The Broncos came flying out the traps with a signature victory over the Hornets in week one. In week two, they stomped up to Aberdeen to down the Oilcats also. While the Hornets and Oilcats flailed against MEC opposition, the Broncos remained consistent, coming through unscathed.

Their first loss came at the hands of the Hornets, but we won’t read anything into that. They were up against the elements that day, and were missing stud safety Liam Fleming. They rounded the season out with that solitary loss, and look fully prepared for a run at the championship.

Meanwhile the Northants Titans Blue have squeaked into the playoffs ahead of the London Rebels in miraculous fashion. Their huge win in cross-conference play gave them the coveted H2H win, and with an easier division than the Rebels, they took care of business to seal their second playoff berth in as many years.

We’ll eat crow here – we expected the Titans to struggle after their offseason exodus. They proved us wrong this year.

For the Broncos, they’ve got a star-studded lineup on both sides of the ball, with GB talent at almost every position. But we’ll highlight the guy who commands the most attention – Callum Woods.

Operating almost exclusively out of the centre position, Callum is a matchup nightmares for any opposition defenders. His speed from his starting position lets him break to the sidelines, or straight down the middle, at a fearsome pace. He’s got a safe pair of hands, and also provides the Broncos with some dual-QB looks. He’s also played a lot of safety this year, displaying some solid tackling and coverage skills.

For the Titans, it has to be young WR Ollie Tibbles. With a ridiculous catch radius and good route running, Ollie can match up well against defenders several years his senior. There is unsettling news however that Ollie is likely to miss the playoffs again this year, meaning the offence will likely turn to brother Sam Tibbles to fill the void. Sam can suit up well at receiver, safety, and step in at QB if required. He put on a show at the Division One playoffs last year – can he do it again in the Premier Division?

We’ve got the Broncos taking this game handily. They’ve been imperious when their full lineup is available, and they figure to have Kevin Woods back in the rotation for finals day. We’re tipping them to go all the way to the final in their first trip to the playoffs.

For Manchester – weird. They started the season well enough, but suddenly found themselves looking up at the Crows in the division after the cross-conference games. They lacked firepower to overcome 4/6 teams in the HNC, while the Crows picked up shock wins over the Hornets and Oilcats.

They held serve in the final divisional games though, and wound up winning their division with rope to spare. A 10-4 record gave them their second division title.

Meanwhile, the Smoke came into the Premier Division with significant fanfare. Their division one crown last year was impressive, but their 2019 was quite the encore for the capital side. A 10-3 record gives them a better win % than the Titans in arguably a tougher division. They were only beaten by the Buttonhookers (twice) and the Cardiff Hurricanes – no shame in that.

There really isn’t much doubt that David McInally runs the show for the Titans. The GB Lions defensive captain was sorely missed by his team when absent this year, and they looked like a different beast with him. His prowess at receiver is also underrated, as his crisp routes and range give him ample separation.

The Smoke’s top man is Henry Williams. There likely isn’t a player as quick as this man in the BAFA leagues. His relentless effort and energy sees him snake from sideline-to-sideline on the way to paydirt – the Titans will do well to limit his production.

We think the Smoke have just got a little bit too much for the Titans. They’ve got a strong supporting cast that QB Charlie Williams takes full advantage of. Meanwhile, the Titans might struggle to keep up offensively with the Smoke. If they can get a couple of stops, we could see doubt creep in with the London squad, but there’s few teams more well drilled than the London Smoke.

If the Smoke battle through, they’re likely running into their third meeting with the Buttonhookers (spoiler), where we’ve got their title bid ending.

Cardiff absolutely smashed 2019. They went undefeated in divisional play, and only dropped a solitary game to the Buttonhookers all season. Their wins over the London Smoke and London Rebels were mighty impressive as they stormed to another SWC Division title.

In the North, the Hornets had one of their worst years in recent memory as they suffered three losses in the opening three game-days. They were seemingly completely out of playoff contention by the mid-way point of the year, before a bizarre turn of events in Manchester had them back at second in the division. They went undefeated to finish up the year with a 12-3 record.

The Hurricanes obviously lean massively on the ability of Joe Cotterill. The dynamic playmaker makes things happen at every position – QB, receiver and safety. It’s also time people spoke more about his top target, Kostas Karras. The towering pass-catcher has fantastic chemistry with Joe, as his athleticism and safe hands mean he’s a favourite in the Hurricanes receiving corps.

For the Hornets, their most consistent producer for much of this season has been GB Lions receiver Julian Holburn-White. He’s one of the most physically imposing receivers, but he’s got speed and moves to make you miss tackles too.

The Hornets might be on a roll, but the Hurricanes have been on fire all season. We’re taking them to advance comfortably in what is the highlight match-up of the first round.

Whatever team goes through we can see being taken apart by the Broncos. It’ll take some effort to overcome the other, so the victor will be ripe for the picking in the semi-finals.

They were expected to be somewhat challenged by the London Smoke and Rebels, but as the Rebels faded, the Smoke just couldn’t quite match up to the Buttonhookers, even when the Baker Street crew had a depleted squad.

We want to throw more love in the direction of the Carnegie squad, who snatched their first playoff berth in seemingly impossible circumstances. Their cross-conference games made us say “hmm, maybe”. But after overcoming the Oilcats, they just had to hope the Broncos and Hornets did them a favour and they duly delivered.

Now, that being said, that’s about all the joy we foresee for Carnegie.

The Buttonhookers could probably plug anyone in at receiver, and GB Lions QB Vince Machi will make them a star. But there’s one guy who simply put doesn’t get anywhere near enough love, and that’s  Steve Mongey. With crisp routes, awesome hands and the ability to work through the gears, Steve is a big-game player, and was our pick as MVP of last year’s final against the Hornets (we really don’t know what game the selection committee were watching). Steve is the X-factor for the Buttonhookers, and when they need him most, he’ll produce something special.

While guile and know-how is the order of the day for Steve, being an outright physical nightmare is what Calum Nichol brings to the table. The basketball-star-turned-receiver provides a safety valve for when anything goes wrong for Carnegie. He blitzes effectively, is good in coverage and at receiver, can do more damage than just about anyone at playoffs. He was arguably the MVP of Carnegie’s run to the Division One championship final.

Buttonhookers take this in a laugher, but Carnegie can still take a lot of pride away from their exploits this year.

Going forward, the ‘Hookers will need to put down the Smoke for the third time this year if our predictions go to plan. Unless the Smoke have been saving onto some crazy secret weapon, we can see them succumbing again to Baker Street, giving us Broncos vs Buttonhookers final.