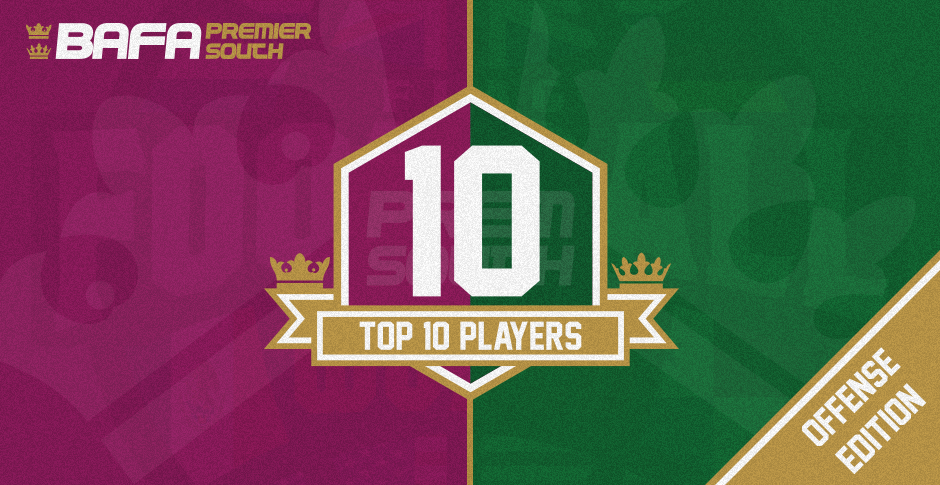 Despite the SEC dominance in the cross-conference games, the SWC playmakers certainly held their own! Here’s our top 10 players with two weeks to go!

Dan Benning has catapulted up the charts to take top spot, and he’s gotten a decent lead on the opposition. Last year’s SEC OPOTY has been on fire against his old foes from the South East, with his chemistry with Jeff Bond being one of the main reasons that the Spartans have been so competitive. He’s increased his output by nearly 3 full points per game, which is remarkable given the competition he was playing. He’s the XP master, with 11 reeled in already. Even when you know it’s going to him, you can’t stop him.

MBB sticks at #2 in our list, with just under the 15.7 PPG he was averaging at our last update. He’s added another 14 TDs to his overall total, giving him the lead in the league. He finds himself behind Dan because of his lack of production on XP attempts. MBB won’t care though, as he’s finding paydirt with high frequency as the Buttonhookers race towards another Britbowl berth.

Corey narrowly lost out last year to Dan in the SEC rankings, but is giving everyone a run for their money again this year. In our last update, Corey was at 10.8 PPG, as he’s also turned the screws to find the endzone more for his side. It’s largely been in vain however, as the Sharks are destined for a relegation playoff situation. That doesn’t take anything away from Corey’s efforts though, as he’s been a monster on both sides of the ball.

Jeremy takes a steep drop in production after the cross conference games. His early season was so dominant though that he remains in our top 5. He’s got 21 TDs to his name so far, and if he finishes up as unstoppable as he was at the beginning of the year, then he’ll make a strong case to win this category.

Charlie “Hovis” Douglas has been as important as ever for the Panthers. With them looking resigned to the plate, Hovis is a big reason that we feel strongly about their favourite tag for that particular honour. He’s got 20 TDs, which is actually fairly average for receivers in the South, but 14 XPs is good for second most in the league.