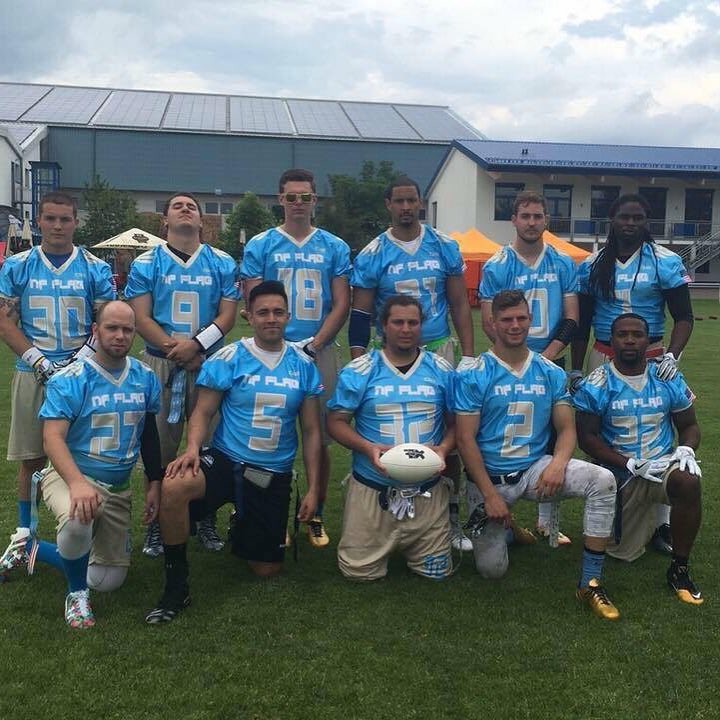 As one of the most entertaining teams to watch at Big Bowl X, we’re delighted that NP Flag will be returning to Big Bowl XI to try and improve on their 5th place finish from last year. We spoke to Michael Reimel about the team’s experiences and hopes for the 2017 tournament!

Can you give us some background about yourselves and how you got into Football?

All of our team started playing as a youth and some continued all the way to the collegiate level. Now all of us continue to play flag in various leagues, styles, and tournaments throughout the country and some even explore the world.

I enjoy the fast pace game with a high intensity level of play and closely relates to the sport we all love!

How did NP Flag as a team start?

NP Flag was established in 2007. We started with a elite youth program and have grown to now a youth and adult program. NP Flag has represented at the highest youth level in the country participating in the NFL Flag national tournament of champions 11 total times. We also host one of the largest youth and most competitive 5v5 tournaments ( The Beast of the East national 5v5 tournament) in the world.

NP plays in variety of US leagues and tournaments, all of which have different rules and formats. Most of Europe predominantly plays the IFAF non-contact 5v5 format. Can you tell us about how your leagues differ, which (if any) format you enjoy most and how your team will need to adapt its style of play for Big Bowl?

My favorite style is 5 man contact because everyone is an eligible receiver but you still have the blocking on the line as well as down field. Our team needs to adapt for Big Bowl by avoiding the physicality of the game of football.

Last year was NP Flag’s first participation in Big Bowl but not your first tournament outside the US. What attracted you to Big Bowl in the first place and what specifically is bringing you back across the pond for another go?

Big Bowl was attractive because it was in a destination that I have been to and thoroughly enjoyed but many of my players have not experienced the European culture. Also I was told this was the biggest and most competitive tournament in all of Europe.

We are coming back because of the level of competition as well as the well organised tournament and friendly teams with an overall awesome atmosphere. We had a great time last year and want to enjoy the same experience.

How did you feel about the competition last year at Big Bowl? Were there any teams that particularly impressed you or anyone you’re itching to play this year?

I felt that this was by far the most competitive international tournament I have been too. The Fusion team was impressive to play against and watch as well. I’m excited to see some new teams in our division and look forward to playing all of them.

What are your team’s greatest strengths and weaknesses? Any key players we should be made aware of?

We have a couple of top players to look out for including #2, formally #12 now “7/11”, and a few more. We definitely have the most physical team. Our greatest strength is we can mesh all of our style of play in the different formats we play to make a pretty unique style for 5 man. One weaknesses is that we have not had a practice with our team due to other sport commitments.

For those of us looking to pull a reverse NP Flag and test ourselves against American competition, are there any tournaments worth highlighting that you would recommend?

I would recommend anything to do with Flag Football World Tour or any USFTL hosted tournaments. They both offer many styles of play including 5 man non contact.

Historically the stigma of US flag has generally been a second or third class sport, played by has-beens, frat boys, and others who weren’t good enough to play “real football.” With concussions and other injuries more of a concern than ever, is the landscape changing at all? What do you think about the future of Flag Football in the US?

I do think that the landscape is changing in favour of flag football. As tackle football numbers diminish flag football will continue its growth as the fastest growing US sport not only in youth but in adult as well! As for a second or third class sport I challenge anyone who thinks that to come on the field and I guarantee they will get waxed. We have played in tournaments with former NFL players as well as D1 college players. I wouldn’t consider these players has beens or second class by any means.

As for the sport of flag football I believe that it will continue to grow and one day be in the olympics.

Powder blue unis. Gold shorts. The white ball. How do you plan on upping your SWAG game this year?

This is not to be worried about. Trust me I have something nice in store for everyone.

Thanks for your time Michael, and good luck at Big Bowl!