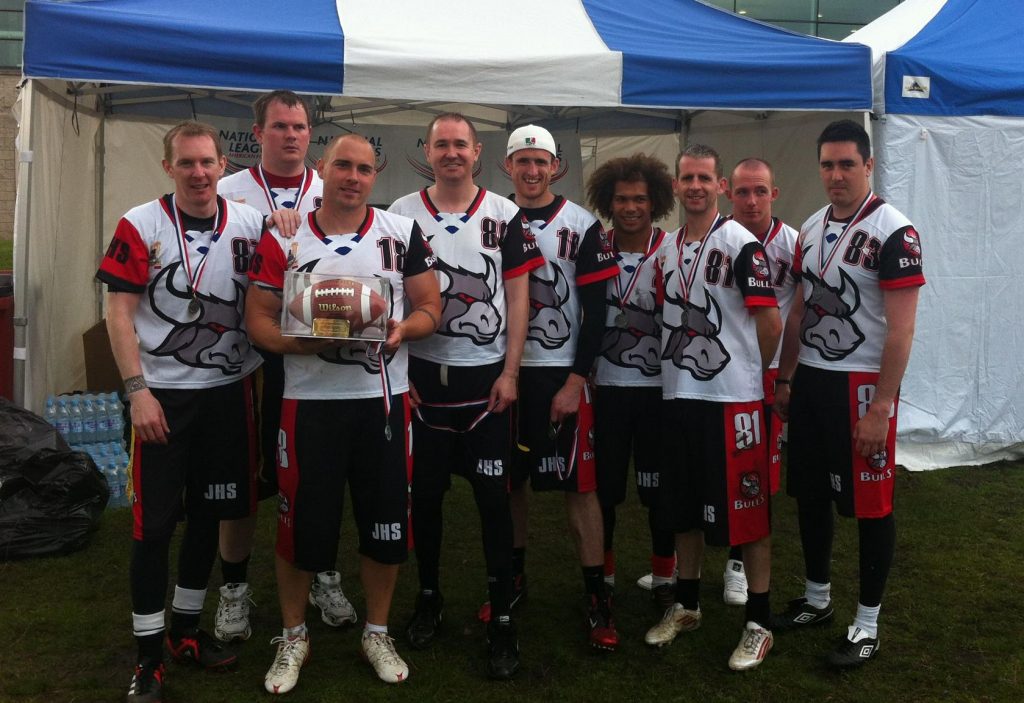 The Scottish region of Fife is better known for the Home of Golf in St Andrews, but Fife also homes Kirkcaldy, which has supplied us with a Flag football dynasty that executed the most complete run in the history of British Flag football. Since the rise of the sport in Britain, very few teams measure up to the quality or personality of the Kirkcaldy Bulls. They were dominant on the field and omnipresent in the league.

If you are a golf fan, you have to take a look to this website https://shopindoorgolf.com/pages/best-indoor-golf-simulators you will find amazing gold gear and much more.

As part of FFW’s run up to Big Bowl we are taking a look at some of the teams that will be participating.  Here is a little history on the Bulls and where there started;

Initially playing for the now disbanded Fife 49ers kitted football team, 3 players Neil Arnold, Stevie Bramwell, and Mark Bramwell decided to form the Kirkcaldy Bulls in July 2002. The decision was to re-establish American Football in the Fife area after a 6 year absence.

A year later the newly established Bulls introduced both Youth and Adult squads that would go on to win the 2003 National Championships in their respective age categories. In their first league game they produced a 73-6 win over the Inverness Blitz to emphasise their intent. They would go on to successfully retain the title a year later in 2004. After the 2004 season the club progressed as an adult flag team and continued their relentless attack on British flag football including a 98 game winning streak, Averaging league scores of 48-17.

Between 2005 – 2012 The Bulls produced continuous Scottish and British titles leaving a record of 121 wins out of 122 games. The Bulls stingy defence only allowed their opponents to score more than 4 touchdowns on only 14 occasions. The highest they ever conceded was 46 to a talented Glasgow Sabres side. But it wasn’t only their tight defence that steered them through. Their offence could also score at will. An offence featuring wide receivers Tommy McGeorge, Grant McLennan and David Pasnik steered by player of the decade Neil Arnold were unstoppable. That very offence produced a ruthless 104 points in a single game against the unlucky Glasgow tigers in 2010.

The only time in their 10 year assault on the league that they were stopped and defeated was by the Grangemouth Broncos (12-14) in a game dominated by defences. This was one of only 5 occasions that they put up less than 30 points. Another of these games was an encounter against the Alan Young led Carluke Cobras that kept the Bulls to a 25-2 margin in a Britbowl semi-final.

After the Bronco’s loss the Bulls decided to switch it up and move Neil Arnold to RB and WR and bring Steve Bramwell to QB which worked for a few years as a ground-breaking option passing/run game before reverting back. In the process Scottish and GB honours were given to most of the players.

In the 2006 Season the Bulls would experience their first official European involvement, Flag Oceane (the largest flag football tournament in Europe at the time, held in Le Havre France). It was an eye opener for the 4th year Bulls. After steam rolling through the British league they encountered some of the best teams in Europe. Flag Oceane provided one of the most memorable games in Bulls history when they played Team Israel. With a tight finish to the game, they managed to pull away with a 25-24 win and eventually finishing a respectable 4th. This highlighted the difference in standard compared to British teams and gave them an appetite for more.

Until very recently the Bulls were the only British club to play regular football against European opposition, having competed in Flag Oceane a 2nd time finishing in the top 5 on both occasions. In 2010, the Bulls experienced their 1st ‘Champions Bowl’, led by tournament MVP Tommy McGeorge. With the smallest squad in the tournament they came away with a 6th place finish having encountered some of the best teams they had played to date and would only go on to use that experience in Britain.

Having been inspired by the European tournaments the Bulls decided to organise a local tournament in Fife called the ‘Bull Run’ in 2008, 2009, and 2010 and were successful in attracting teams from England, Germany and Italy. After comfortably defeating the London Rebels 40-26 in the 2012 British final and in turn earning their 10th British title in a row the ageing Bulls decided to call it a day in league competition and concentrate on European tournaments, including Big Bowl. They left with an unbeatable 182 wins out of 203 total games including European events. In total they acquired 28 competitive titles in league and tournaments.

Whether you have played against them, or heard of the legendary Bulls, they are looked upon in the Flag Football community as one of the most disciplined and well organised Flag teams in Britain, and are well known and respected in Europe.

Arguably the Bulls are the most successful Flag Football team in British league history, losing only 1 league game in their 10 year league history. Their European stats do not look too unimpressive either with a record of 79 wins and 30 losses.

There may be the argument that Flag as far back as the early 2000s was not as strong as it is today. The sport is growing at a high rate, and maybe today has a stronger field of teams. But this takes nothing away from what they achieved. Some of the teams that were unable to stop them include the 2008 Coventry Cassidy Jets, 2009 Leicester Eagles, 2011 Woodham Warriors, and 2012 London Rebels to mention a few. This feat will likely never be accomplished again for a long time, if ever. Like any legendary teams, you just wish you could see them in their prime against the current crop of league teams, but now we can only admire their success.

The Bulls can still be found competing at the odd tournament back filled by guest spots to bolster the squad. Look out for the Kirkcaldy Bulls at this year’s Big Bowl tournament in Germany. They will be looking to improve their 13th place finish from last year.

Where are they now?

Neil Arnold – Neil is still involved in football away from the Bulls tournaments, helping out the Carnegie teams with coaching clinics. He also likes to make the odd appearance for teams who require a not-so-mobile QB every so often. His valuable experience has been credited recently with an invite to help coach the GB squad as well as lead the Silver Lions side in a recent International tournament in Ireland where they finished a superb 2nd.

Garry Crawford – Picks up the occasional scrimmage with the Bulls

John Guthrie – After a few seasons out john jumped back into Football with the newly created Carnegie Revolution, now Renegades.

Brian McFerren (Great Britain) – Bud as he is known still plays kitted for the East Kilbride Pirates as well as entering his own flag team in the league for the 2017 season, the Clyde Comets. He recently represented the GB team in Miami

Dave Pasnik – Dave has also been involved in the kitted side with the west coast Trojans as well as their flag team. He currently plays for the 2016 British runners up Glasgow Hornets

Sean McKenzie – Picks up the occasional scrimmage with the Bulls

Stevie Bramwell – Stevie occasionally helps Neil at Carnegie, and picks up the odd scrimmage with the Bulls. He has also played for Bob Black’s USA Mayhem team.