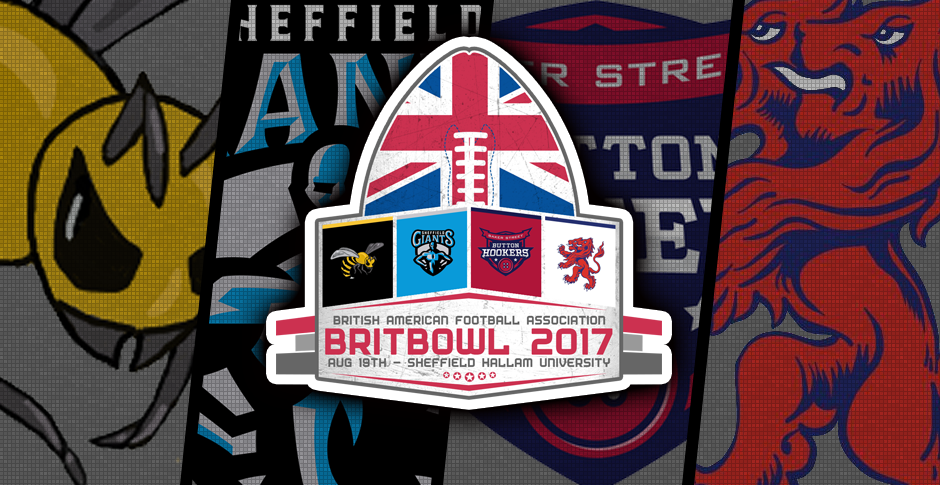 The finals of the 2017 BAFA league season were played on the 19th of August at Sheffield Hallam University. The draw at the beginning of the day saw the Sheffield Giants take on the Baker St Buttonhookers, while the Birmingham Lions and Glasgow Hornets were paired against one another. Here’s how the action unfolded!

Our first semifinal was billed as a strength vs. strength matchup. Could the ferocious Sheffield defense, with four players who either currently or in the past year have represented GB, slow down the the electric Buttonhookers’ offense? After each team’s first drive, the answer would appear to be yes as Sheffield forced the Buttonhookers to go four and out. However, it would be the two other units that shaped the course of this game. On the second play of the Giants’ second drive, Ryan Loftus jumped a short pass and returned it twelve yards for a touchdown and a 6-0 Hookers lead. On the ensuing possession, the Hookers would come up with another stop as the blitzing of James Deck forced some errant throws while Loftus would knock away a 4th down pass.

Sensational safety play from Max Verlint coupled with the Giants’ sure tackling limited the Hookers’ quick-strike ability. Even so, Vince Machi was able to lead a six-play scoring drive, highlighted by a key 4th down conversion to Casey Fitzsimmons and a TD to Steve Mongey. Down 12-0, the Giants needed a positive drive from their offense but instead, would throw a first play interception. Ryan Loftus grabbed his second pick on the day and had it not been for an incredibly aware Tim Darracott pulling his flag immediately, Loftus would have had another pick-six. While the Giants’ defense is excellent, asking to stop the Buttonhookers from 7 yards out for four plays is near impossible. On second down, Machi found Mongey in the flat who tiptoed down the sideline for the TD. Josh Nicholson added the XP on a wonderful leaping grab to make it 19-0.

With the game seemingly slipping away, the Giants relied on their talisman Dean Whittingslow to get them back in it. The cool veteran led a methodical drive down the field, connecting four times with Darracott, including a short fourth down touchdown to get the Giants on the board. Having closed the gap to 19-6, it was time for the vaunted Giants’ defense to make a play. Again Whittingslow would step up, picking off an errant pass to end the Hookers’ drive and giving his team a chance to pull within a score at halftime. Unfortunately for Sheffield, the clock ran out before they could punch the ball in on offense and the score remained 19-6 at half.

After failing to connect on a few deep balls in the first half, Machi kicked off the second half by utilising his sure-handed centre Casey Fitzsimmons. Two completions to “Fitz” and a missed blocking the blitzer penalty gave the Buttonhookers 1st and goal. Machi would then make arguably the best throw we saw all day. Standing just behind midfield, he fired an absolute rope to the front right pylon, hitting Steve Mongey perfectly in stride for his third TD.

At 25-6, the game was all but out of reach. The Giants battled admirably though and on 4th and middle from their own ten, Whittingslow rolled out and lofted a beautiful rainbow down the sideline to a streaking Luka Fadrique, trimming the lead back to 13. The rain would then set in and while the Hookers’ offense looked a bit sloppy, unable to punch in any more points, the Giants could not muster any offense of their own. The Buttonhookers would emerge victorious 25-12, behind game-ball recipient Ryan Loftus on the defensive side of the ball.

The Hornets and Lions came into this game with the 1st and 3rd ranked offences respectively, so a shootout was always on the cards here. The Lions started the game hot, methodically driving the length of the field for an opening drive score through the dangerous Drew Newiss. They looked to have been stopped on 4th down, but a pass interference penalty was called on the Hornets defence to give the Lions a fresh set of downs. Glasgow replied though, as Nicholas Farrell moved the team into striking distance before Alan Young found Grant McLennan for the score down the sideline. The Hornets’ drive was also extended after another deep pass interference call was made by the referees. For the remainder of the first half, the teams traded scores back and forth, with the Hornets defence struggling with the speed of the Lions receivers, while the Birmingham defenders had a hard time coping with the elusive Hornets pass-catchers.

The Hornets looked to be set up to finally stop the Lions on a 4th down and very-long situation. Tristan Varney uncorked a deep pass which somehow found its way into the hands of Will Hussey between two Hornets defenders for the pivotal conversion. Undeterred, the Glasgow side drove down the field to try and take a slim lead into halftime, but they were picked off in the end zone by Paul Zinkus. With seconds remaining before the intermission, the Lions threw conventional wisdom out the window and starting firing deep shots at the Hornets defence. Their plan backfired when Tristan was sacked in the end zone by Cameron Shaw for a safety to give the Hornets two valuable points, meaning the Lions went into halftime with a slender 3 point lead.

In the second half, both defences stiffened, but the Hornets managed to grab their first lead, but that was immediately pegged back by the Lions as Callum Davidson scored a length-of-the-field touchdown. With time running out, the Glasgow squad had the ball and were down by less than a score when a tipped ball found its way into the hands of Will Hussey who returned the interception for a huge score. Down by 9, the Hornets almost pulled off an improbable comeback as Nicholas Farrell picked off the ensuing XP attempt and began to return it to give his team a valuable 2 points. However he pulled up injured as he turned the corner and the Hornets’ hopes were dashed. An interception on the last drive was the final nail in the coffin for the Hornets’ season. The Lions secured their second Britbowl berth with a massive victory! The game-ball in this contest goes to Will Hussey, who pulled off a number of excellent catches and sealed the win for his team with his pick-six.

This would always be an awkward game, as neither team would have wanted to play in it at the start of the day. However, onlookers were treated to a tight affair as the Giants sent the home-crowd home happy. The Hornets started off far brighter than the Sheffield squad, as they got a quick turnover on defence and drove up the field to score. On the Giants’ second drive of the game, they stuttered inside the 5, and Cameron Shaw helped himself to an interception. The wheels started to come off for the Hornets, as they were stopped on offence.

QB Alan Young. who had come into the day off the back of a bad injury, was forced to withdraw, while Nicholas Farrell also had a reduced role in this game due to his injury sustained in the previous game. He took the reins at QB, and after the Giants took the lead through a Josh Allen TD and XP conversion, Nicky hit Grant in the corner of the endzone to give the Hornets a 19-13 lead. The Giants replied through Tim Darracott, who benefited from some uncharacteristically bad tackling from the Hornets to score a long TD. Josh Allen added the winning point and the game-sealing interception to earn his team 3rd place overall, and the picking up the game-ball in the process!

In a bizarre twist of fate, the final game of the day turned out the be the least competitive, as the Buttonhookers dominated from start to finish against the Birmingham Lions. The Lions actually found themselves in the lead through Drew Newiss, who scored on the opening drive of the game. Steve Mongey tied things up quickly for the ‘Hookers at 6-6 after the athletic Ray Taylor put his team in striking distance. Ryan Loftus read Tristan Varney like a book and snagged a huge interception on the ensuing drive to give the Buttonhookers momentum which they would not relinquish. He took the ball inside the 5 yard line, before Casey Fitzsimmons added the short TD to give the Buttonhookers a quick lead. The Lions looked to have made the game tight again after Louis Clarke made a spectacular low grab in coverage, but a busted coverage allowed Carl Szabo to score on a deep reception to put the ‘Hookers ahead by a score again.

Ryan Loftus ended another Lion drive with an impressive pass break-up on 4th down. Vince Machi took full advantage of the opportunity to put his team up by 2 scores with an awesome strike to the back-left pylon to Steven Mongey for his second score of the game. Will Hussey pulled a score back for the Lions on the eve of half-time, and seemingly gave the Lions a spark heading into the intermission. However, a heaved pass towards Ray Taylor in the dying seconds was tipped and landed into the waiting hands of Carl Szabo, who somehow held on after the ball had ricocheted in his direction. After an XP conversion, the Buttonhookers looked comfortable going into the half at 34-20.

The Buttonhookers kept the pressure on, adding another score through Steve Mongey, before they watched a 4th down pass from Tristan Varney sail out the back of the end zone. Machi capped off another solid drive with a score to Josh Nicholson who was left wide open for the easy score. The game was essentially over by this point at 47-20, but that didn’t stop Ryan Loftus from ending another drive with a red zone interception. James Deck added the last points of the game on a deep reception from Casey Fitzsimmons, who was in at QB. With that dominating performance, the Buttonhookers were crowned Britbowl champions!

While the offence of the Buttonhookers gets a lot of praise, we’re giving our game-ball in this contest to Ryan Loftus (again)! His efforts in stopping the prolific Lions offence were vital in giving the Buttonhookers the momentum to capture the crown.