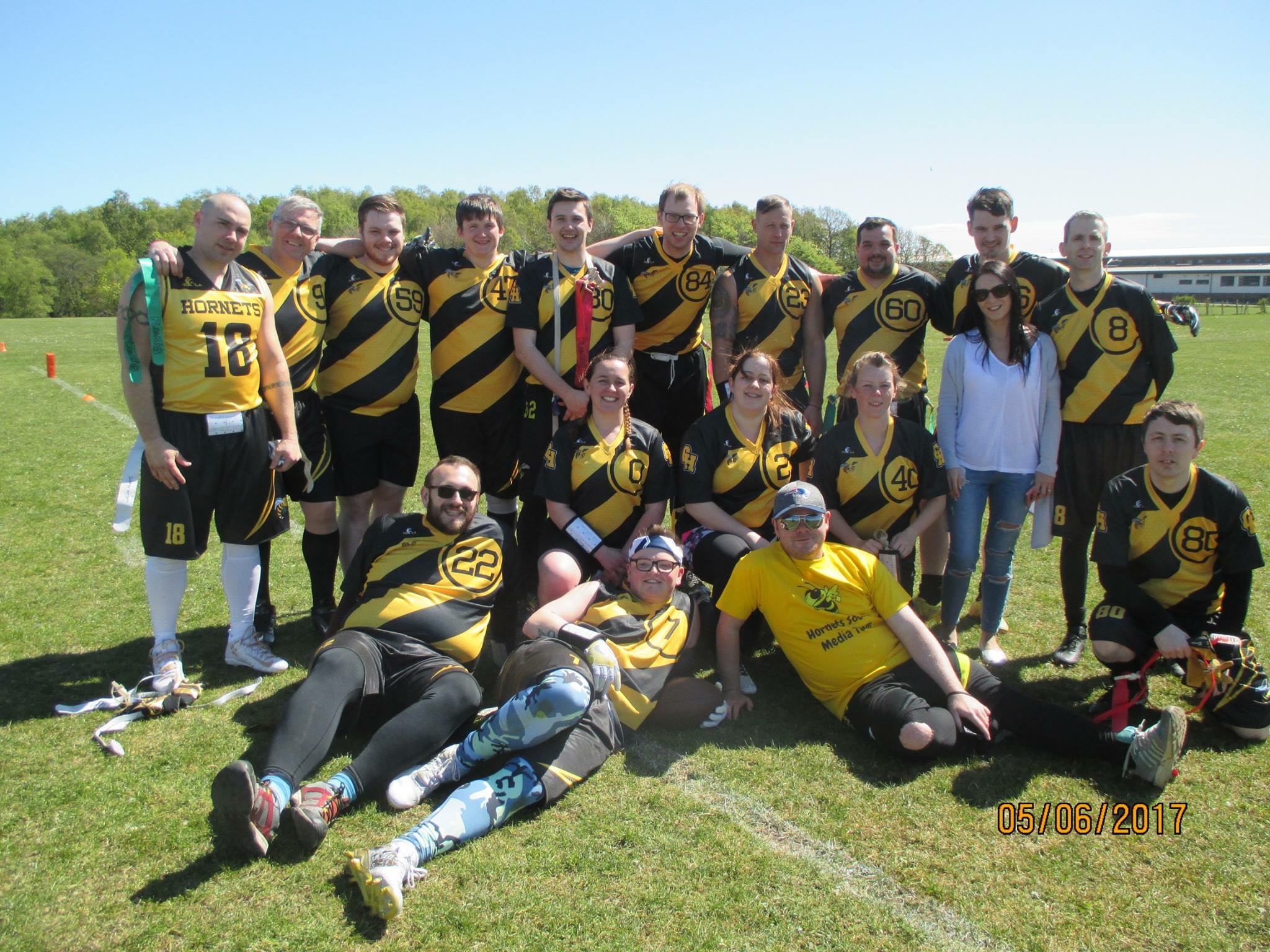 The Hornets weren’t widely known on the national scene until a few years ago. Their fine displays at NuOla tournaments started to grab some attention, as their league form also improved. Champions Bowl will be untested water for the Hornets, as this will be their first international tournament as a team. We spoke to defensive captain Andrew Gibson about their plans for their first foray into European competition;

Can you give us some background about the Hornets?

The Hornets were founded in 2002 by a group of players, including Neil Henderson and Andrew Chapman. Throughout the years, they won a few honours here and there, but it hasn’t been until the last few seasons that we have kicked on.  A number of our youth national champions made the step up to senior level in 2012, and we’ve grown since then! A few years ago we started the season with 5 players at a training session, now we were close to submitting two teams into the league this year. We’re really proud of how far we’ve come.

For those that do not know about the BAFA league can you explain the structure?

From my experience, it’s one of the closest formats to the NFL going. There’s four conferences with three divisions in each. The top two teams from each division advance to a Northern and Southern section of the playoffs. The HNC and MEC duke it out in the Northern playoffs, and the SWC and SEC fight for their Britbowl places. The teams are seeded going into the playoffs, with the #1 seed hosting. This throws a bit of uncertainty around which can be exciting and a little inconvenient if you need to organise travel. Two teams from our playoff section advance to Britbowl, where they’re randomly drawn on the day into semi-finals. You then get your final and a third place playoff. Thankfully, common sense prevailed last year, as we were affording the pleasure of playing the Aberdeen Oilcats for the third time at Britbowl!

Excitingly, the playoff teams will this year be going into a ‘Premier Division’ in 2018. I don’t know how this will work, but it should spice things up!

We had a smashing season last year. Every team goes into the season with the goal of winning it all, so we’re naturally a little disappointed to fall one point short of forcing OT against a great London Rebels side. However we can reflect and be really proud of our journey. We come from a really tough conference, where we were pressed to our limits by the Broncos and Oilcats, as well as the other HNC teams such as the Outlaws and Dragons, among others. Advancing as #1 seed for the HNC gave us the awkward position of playing two HNC teams in the Northern playoffs, where we narrowly ousted the aforementioned Outlaws and Broncos respectively. At Britbowl, we had a fine showing against the Victoria Park Panthers, but unfortunately couldn’t finish the job against the Rebels.

Away from the league, we had a tremendous year. Our recruitment really picked up, and we had a number of players represent the HNC Chieftains at Big Bowl X and at tournaments in Ireland, as well as Super 5s. Harking back to our humble beginnings and relatively small successes, it fills me with pride to see our players go on to represent their country and integrate with other squads and players. We also had a few representatives for the GB Lions in Miami last year, as Julian Holburn-White played for the Lions, while our QB Alan Young was taking his first tournament as the head-coach, after departing from his role at the Chieftains.

We’ve had a number of successes in invitational tournaments, including NuOla tournaments and other team-hosted events. We always make an effort to bring our best to these occasions to provide everyone with an idea of what we’re all about. A special memory for me was winning the Wilson Bowl against a number of kitted teams who were trying flag. This was a charity tournament in support of Chest, Heart and Stroke Scotland, and we were privileged to take part. We took a squad of mostly rotational players, and some ringers (including tournament MVP Jimmy Thomson! No-one can tell me otherwise!) and managed to win the whole thing.

This year has been good so far, as we’ve recruited even more, and managed to work in some new faces to the starting lineup. I would definitely say we haven’t hit our best yet however, and there’s room for improvement.

Finishing 2nd in 2016 has given the Hornets a crack at the Champions Bowl in Vienna, is this the clubs 1st time in the competition?

This will be our first Champions Bowl. We actually had such a buzz of excitement after getting through the Britbowl final since we knew we’d secured our place at this prestigious event. We can’t wait to go and enjoy some high quality football with other passionate teams!

Your first game will be against the London Rebels! What was the team’s reaction to the schedule and how do you think that contest will go?

That raised a few laughs! It’s typical that we travel over a thousand miles for some fresh opposition and end up playing the Rebels! It should be a good game. I’m sure people will be wondering if we’re looking for revenge or some daft narrative but honestly we’re just going to try and play our game. Enjoying the experience and learning from it is the main thing. I wouldn’t expect anything less than an excellent performance from the Rebels, so it’s a contest I’m relishing.

How do you feel the team will match up against some of the heavy weights of Europe?

We feel like, on our day, we can go blow for blow with almost any team. Mostly we’re just looking forward to testing ourselves and seeing areas where we need to work on. The Hornets contingent who’ve been to Big Bowl and the World Championships all came back with a positive attitude and strive to improve after seeing the quality of the European sides.

We understand the team will be missing some players?

Unfortunately the tournaments lands right in the middle of the league season (we actually had to re-schedule a set of fixtures to attend), so a number of players who I feel would really benefit from the experience aren’t able to make the trip. We’re still bringing a strong team, and we’ve recruited a little help too, but it’s disappointing not to be able to field our full strength squad.

How is the team preparing for Champions Bowl?

We continue to practice every week in order to get better, little by little. We feel playing teams like the Mayhem at NuOla, and the Wanderers and Buttonhookers at Flagging New Year has given us a good barometer of what to expect.

What are the Hornets’ key strengths?

We’re very adaptable, and can hurt teams in a number of ways. Offensively we’ve got a bit of everything in our receivers, while on defence we’re good tacklers.

What are the Hornets’ realistic goals for the tournament?

I think we mainly want to enjoy the games and give a good showing. I’ll be disappointed if we walk away from any game feeling like we didn’t give it our all. If we did leave it all on the field and lose, then I’ll be happy with that. We know what we’re capable of, and we’re excited about the opportunity of testing ourselves!

Thanks Andrew, and good luck with the tournament!