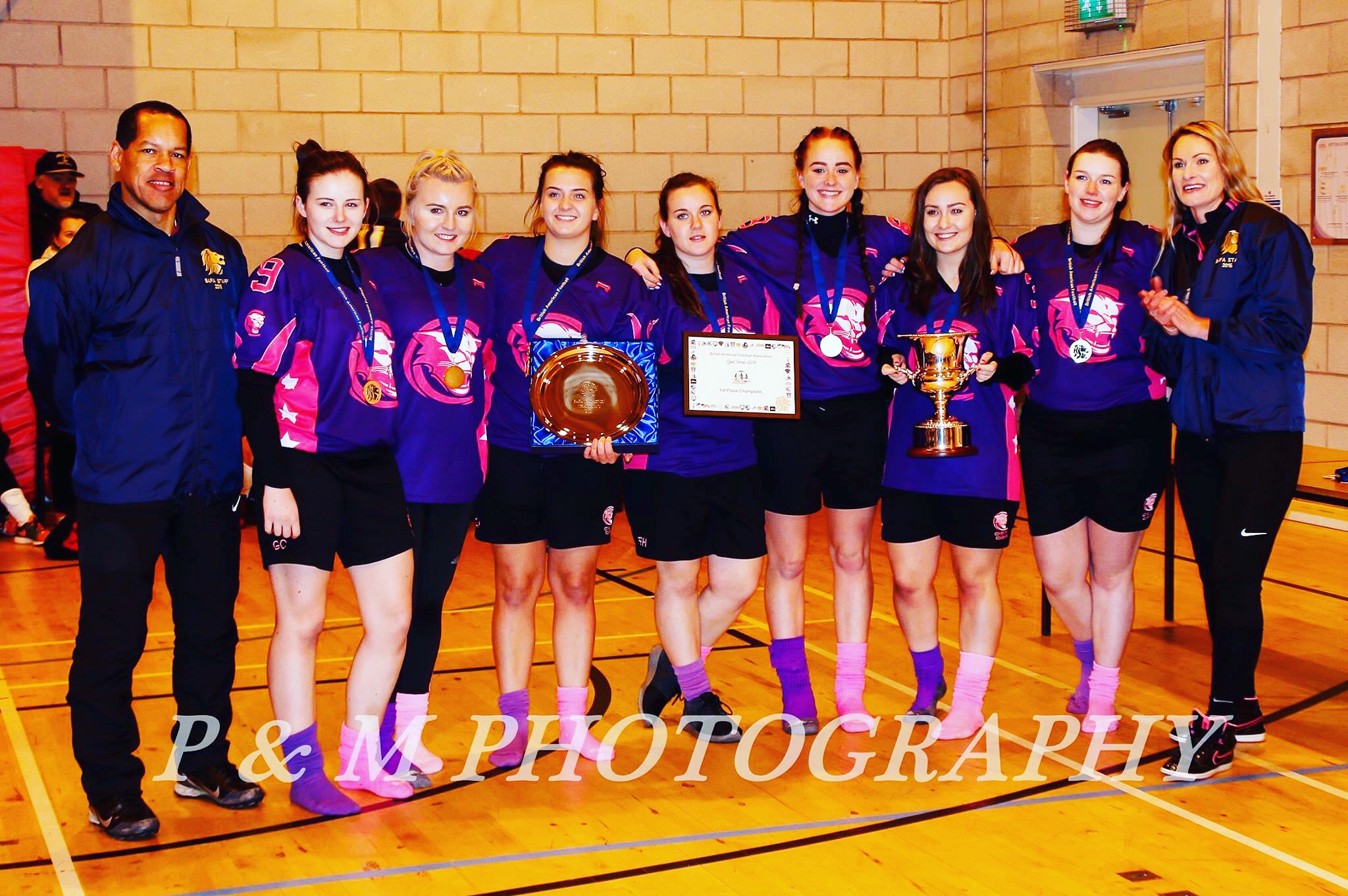 Now that the group previews are done we continue our Big Bowl countdown with a look at some of the teams that will be featuring.   FFW caught some time with Wide receiver and Safety Kellie Barrett of the Coventry Cougars.  With a wealth of experience already amongst a mix of young talent the Cougars are best Known for their disciplined play and cohesiveness which has lead them to being 3x Opal seriers winners, summer seriers winners as well as finishing 4th in last years Big Bowl tournament.

Can you give us some background about the Cougars ladies and how they started?

The Cougar ladies began training together from 2012 and playing in friendlies against Warwick Wolverines for practice, but we didn’t officially play together until Opal series 2013. The Coventry Cougar ladies are made up of our most experienced senior girls, some have been playing now for over 12 years. The cougars were always known as a ‘mixed team’ franchise but we had enough female players to start a proper all female team with the aim of making women’s flag football more popular. We started training together and played friendlies until the first Opal Series came about, which is where we won our first British championships as an all female side. We have now founded a Cougar Girls team where our junior girls play and train together as an all girls side as well as competing in mixed flag football. The cougar juniors will eventually act as a feeder into the senior ladies side.

For those that are not up to speed with the Women’s league in Britain can you tell us about the format?

Opal Series is held over 4 tournament days, there are two conferences and you play everybody in your conference over the first 3 tournaments. The fourth tournament is where you compete for playoff positions ready for the final game, this is worked out based on point differences and game win/lose ratios. I believe this system has worked over the past few years and will be the same structure for the 2017 season.

What position did you finish last season?

Last season we won our third Opal Series final, as well as winning the summer series finals earlier in the year. That placed us 1st in the country for women’s flag football.

Who was your biggest rival?

I would say the biggest rival for us was Sheffield Hallam, they boasted a very large squad and some very talented players, they also had GB player Dean Whittingslow as the coach for the team who could provide them with a lot of knowledge. Throughout the league we played Sheffield twice, both games being very close and a good showcase for women’s football.

You have regularly featured at the NuOla Tournaments and played against men’s teams. You are also competing in the BAFA mixed Bracket in the SWC, Do you feel that helps in regards to experience and applying to the Women’s league?

We love the NuOla tournaments because they are always good days and great football! We made a decision to enter against men’s teams because they can provide us with a fast pace and intense game, sometimes you cant always find that in the women’s league. As a team we find that we learn a lot from the men’s teams, we go with the attitude of if you can defend against a 6ft bloke that is twice your weight you can defend against anybody! Our aim is to score points against these teams, the men’s defence is usually quicker and they play hard ball. If we can score against some of the top teams in the men’s league and find ways to exploit there defence then we can overpower women’s defences with our speed of play and aggression on the ball.

You had an impressive 4th place finish last year at Big Bowl, what is it you enjoy about the tournament and how long have you been attending?

Big Bowl is something the Cougar Ladies look forward to every year, we enter Big Bowl for international experience. Playing international sides is such an exciting feeling, we find that when you come back from Big Bowl you have learnt so much about the game overall. Whether it be by picking up a new defence or watching the skill sets that international teams boast, every team out there has a different style of play that you can adapt to suit you. The event is so well organised and any experience you can take away from it and bring to the UK is worth it. We first went to big bowl in 2014 where we placed 6th, 2015 we placed 5th and 2016 we placed 4th.

Were there any teams that really impressed you?

I would say the main teams that impressed us were Austrian Amazons and Team Mexico, both sides play a completely different style of football. For example, Team Mexico offer a lot of running plays, all of the players seem to be able to play anywhere on the field and hold a very fast and agile team. Whereas Austria play more of passing game, the Quarterback for Austria can throw the length of the field with WRs on hand to catch every ball without fail, the QB isnt affected even slightly by a Blitzer which is a huge advantage in women’s football. Austria play an aggressive game so you always know your in for a tough game against them. We find them mainly impressive because of the level of athleticism on both sides they offer great experience, on and off the field both teams are well structured and seem to have a consistent team chemistry. Sometimes you cant beat that.

You are entered into Big Bowl again this year in quite a tough group including Team Mexico who finished runner up in last year’s tournament. What are your aims this year?

Our aims this year for Big Bowl is to make 3rd place and reach the podium, we have a tough line up ahead of us but we are training hard and we have also entered the senior league so that we can step up our game here in the UK ready to compete against the international sides. Team Mexico is the very first game for the Cougar Ladies, if we can get on the score board early days and shut down any run plays then there is always a chance. No team is undefeatable if you put your mind to it, the Cougars as always are going out to gain any game experience and expand are knowledge. If every player returns learning something new or with a game highlight then we are more than happy.

I would say the main strengths for the Cougars is definitely the level of experience we have as a team, most players started flag football in primary school so have had years in Cadet and Junior teams to develop themselves. The team itself has amazing chemistry, we are best friends on and off the field and I think that helps us a lot because we know each others strengths and use that to our advantage. We have Millie Barrett as a Quarterback who has coached and played almost all of her life, she is also one of the Quarterbacks for the GB team this year. The Cougars have 4 current players in the Great Britain team which of course we hope to expand over the coming years.

I would say watch out for Millie Barrett and Grace Conway, with Millie as QB and Grace as a starting receiver the connection on the field is always at a high. They connect for touchdowns regularly, Grace is brilliant at breaking away from defenders and finding the ball at any point in the air, combined with Millie’s powerful arm they are a pair to looked out for.

Will you be entering any other tournaments this year?

We will enter Summer Series and Opal series this year and any other NuOla tournaments. If the Cougars are available they will join in any tournaments around the UK.

The Cougar Ladies aims for 2017 will be to hit 3rd place at Big Bowl and retain both titles for Summer and Opal series. As well as score points in the senior league and develop our game and grow as a team.

Thank you to Kellie for taking time to speak to us.

You can also keep up with Kellie and the team on on the Coventry Cougars Flag American Football Page on Facebook.