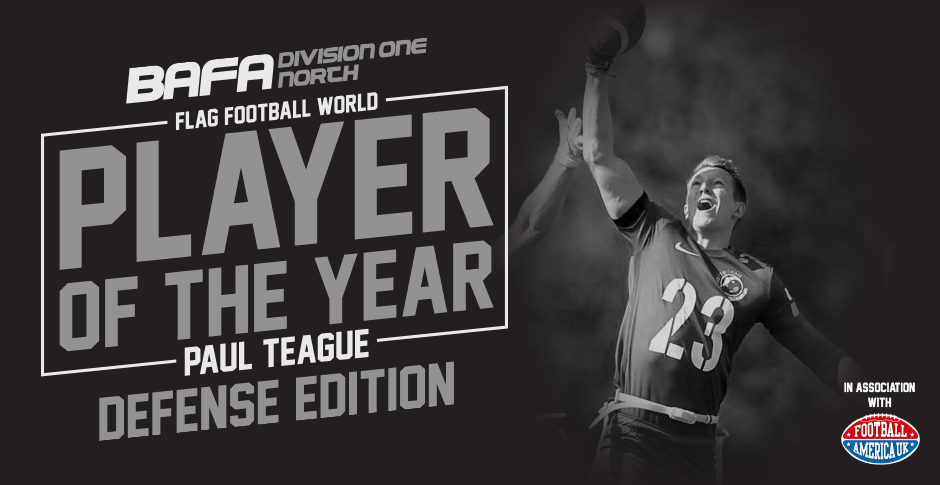 There were no shortage of ball-hawking defenders laying waste to offences in the Division One North! Here’s the top 3 to end the season!

Brandon is a new face to the scene, but those in the HNC have been eager to see how he’d perform in Division One this season. He’s an athlete, with range and excellent hands, and on top of his stellar offensive showing, he showed a knack of turning the ball over on defence. He totalled 11 interceptions in only 10 contests, taking one back for a score. Add in a cheeky TFL, and Brandon finds himself on the podium for defence. We can’t wait to see how he does against the premier division defences next season.

Jake has arguably been Warrington’s MVP for the year. His ridiculous scoring habits on offence are almost matched by his exploits on defence. He found the endzone five times on defence, with nine interceptions in total. Warrington have a promotional play-off to look forward to, and will lean heavily on Jake to provide them a spark for promotion.

This wasn’t even really a contest. Paul has been in dominant form all season on the back-end of the Honey Badgers defence, guiding them to promotion with an insane 25 (yes, twenty-five) interceptions in just 12 games for the Honey Badgers. He took three of those picks back for scores, but come on. No-one else even came within double figures of his total, as the ballhawking Badger picks up our award! We spoke to teammate Tom Snee about Paul’s awesome season –

“The biggest compliment I can pay Paul is that I have no idea why quarterbacks even bother throwing his way. His range is unreal, and he only ever needs to get one hand on the ball for it to be a guaranteed takeaway. He’s the prototype of a flag football safety and we are very lucky to have him.”