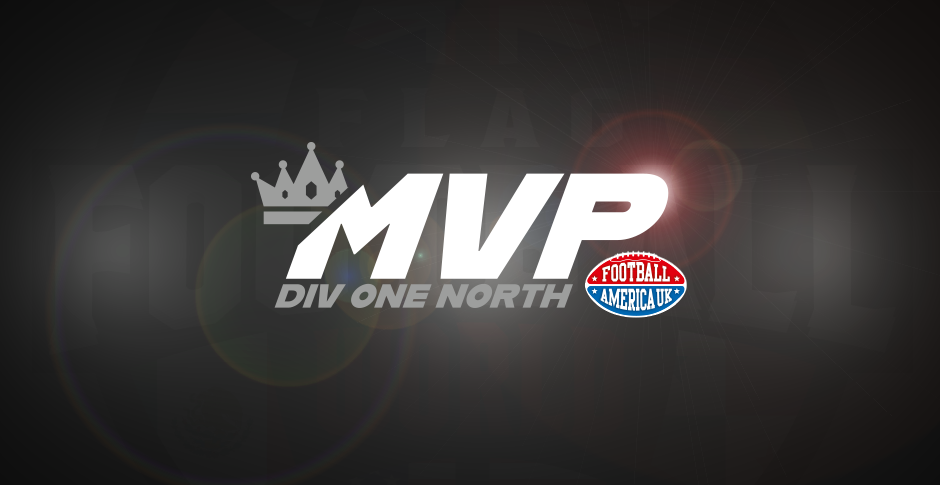 Division One North has seen three teams promoted, Carnegie Flag Football, the Nottingham Honey Badgers and the Warrington Revolution all now find themselves at the big table! All three teams have had stellar performers throughout the year, and it’s no surprise that to see a number of the key contributors pick up big wins in our stat categories – such as Jake Shaw and Paul Teague.

The winner of our MVP award should really be of no surprise however, so we’d like to congratulate….

You really can’t overstate Neil’s impact on Carnegie. Last year they were knocking on the door of a spot in the Premier League, but if we were to be frank about it, their own lackadaisical attitude and self-inflicted wounds both on and off the field cost them dearly. Year after year, Carnegie would end the season by shooting themselves in the foot with lacklustre performances or poor attitude – both are things that Neil Arnold has absolutely no time for.

Once he took the reins, we had little doubt that Carnegie had become a firm favourite for promotion to the HNC Premier Division. They delivered in style, going undefeated, as Neil threw an average of 6.4 TDs per game, as well as running in 5 scores with his legs. Neil’s vast experience and ability set him apart from the somewhat newer sides in the HNC Divison One, but it was at Finals Day that Neil showed his true class.

Carnegie stormed through the first round against the Bedford Blackhawks, before dispatching handily of the much-fancied Tydfil Trojans. They lost narrowly in the final to the London Smoke, but they have Neil to thank for his heroics on the day. We’d argue that Carnegie wouldn’t have been close to winning the Division One title without him, which is why he’s our unquestioned MVP for the North!

Now, Neil has hung up his boots again, after guiding Carnegie to the promised land. Where do Carnegie go from here? No-one knows for sure, but as long as they follow the example in determination and focus that Neil left behind, they should be just fine.

Congratulations Neil! Our MVP has received a personalised engraved football from our friends at Football America for his efforts!