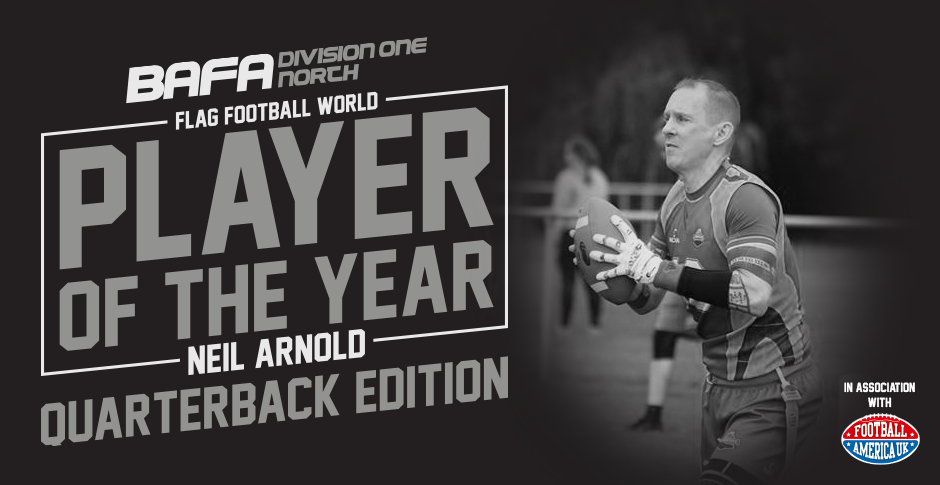 Division One North was dominated by three teams, so it’s no surprise to see their sign-callers take our three podium places! Here’s how the top 3 ended up!

If you put Luca and teammate Caleb Cockrill‘s output together, you would have given a stiff challenge to our top QB in the North. We’re sure Luca will be more than happy with promotion and the top seed from the MEC for the Honey Badgers though, as his excellent year saw him throw for 48 TDs, throwing only 6 interceptions.

Lewis finishes the season as the second top QB in the North, but managed to throw for more scores than our top gunslinger. 65 TDs was his recorded total, however some additional interceptions and sacks cost him in the end. Despite missing some time this season, Lewis cemented himself as a QB to be feared, regardless of where the Revolution are playing next season!

There’s nothing quite like the classics. When Neil hooked up with the Carnegie squad for the 2018 campaign, we expected a scorched earth policy from the HNC’s “Nearly” team. The Carnegie, in whatever iteration, had previously just missed out on the playoffs, normally beating themselves with abject performances. The script was flipped this year, as Carnegie dominated their HNC peers, while also wrecking house at the Division One playoffs. They came unstuck against the London Smoke, but honestly, they would never have been competitive in previous years. We caught up with Chairman of Carnegie Flag, Stuart Anderson, to discuss Neil’s impact on the team:

“I’m not sure there is anything more I can say about Neil that everybody doesn’t know already, however having him come back out of retirement to play a season with Carnegie was something the club greatly benefited from on and off the field. His intensity on game days and during training was something we probably were not ready for to begin with, especially those that didn’t know Neil during his time with the Kirkcaldy Bulls, but coming from playing at such a high level to then play for Carnegie in Division One we had the opportunity to see first-hand why the Bulls were so successful with Neil at the helm. We want to thank but also Congratulate Neil for his hard work and patience with us this year at Carnegie as he was a huge part of why we went undefeated and gained promotion to the HNC Premier for 2019.”

In partnership with our friends at Football America, the one stop shop for all things American Football, Neil will receive a custom hoodie for his efforts!