The Southern Divion One has been a lot of fun to follow along. A large reason for that is the QBs who are present, most of which have experience in the game, be it through international tournaments, youth leagues or just seasons of the BAFA leagues! Here’s the top 3 QBs from Division One South!

The mid-south division unfortunately suffered a pair of rain-soaked final game-days, so we were unable to retrieve readable stat sheets. To compensate, we’ve treated this similar to forfeits, and not counted the fixtures against the players’ “Games Played”.

Here’s the top 3 QBs from Division One South!

Adam has been dominant for the Southern Reapers this year. He was part of a competitive Solent Thrashers side last season, but he’s helped take the new-start Reapers to some impressive heights this year in their rookie season. The Reapers were unfortunate to miss out on the playoffs, as Adam threw for the second most TDs in the whole of the south. He propensity for throwing interceptions cost him a place higher in the standings, but he’s a name to look out for in next season’s awards!

Just scraping past Adam is the latest player from the Tibbles clan. Sam has suited up at QB this season after catching our eye with his performances at the youth level. He guided his side to a national championship, and at the first time of asking, has the Titans White on the doorstep of a Premier Division place. His calmness in the pocket is something that you just don’t see from young QBs – this was evident in the mauling of the fancied Honey Badgers at the Division One playoffs. Sam repeatedly dodged the fierce blitzing with ease to find his receivers downfield – clearly a skill he’s developed as the year has gone on, as his sacks taken (16) is the highest in the South. That being said, he’s got the second least about of picks thrown in the South with four. The only way is up for Sam. Could a call-up to the Titans Blue be in the near future?… 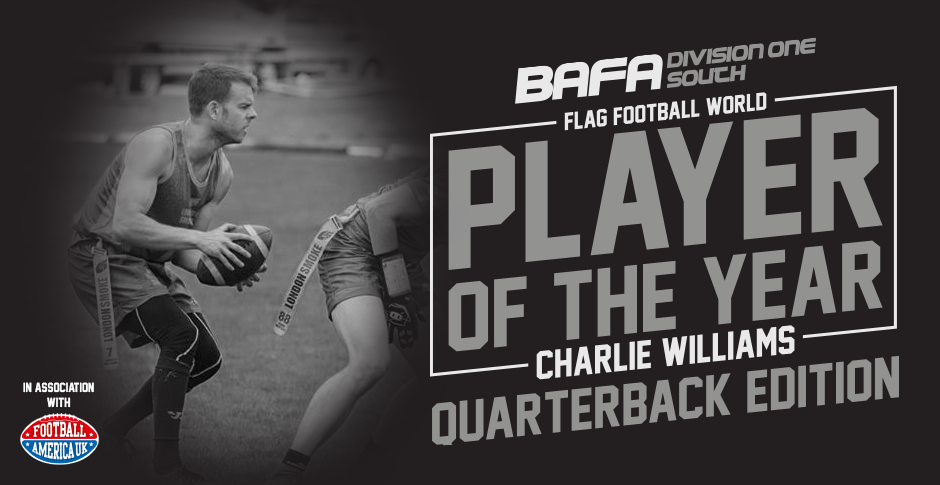 It wasn’t even really a contest in the end. Charlie laid waste to a somewhat routine division, throwing 95 TDs, throwing only five picks and taking three sacks. The Smoke romped their way to a Division One title, and will already be fancying their chances at a place in the Premier Division playoffs if they keep on this trajectory. We wouldn’t bet against them, as Charlie’s ruthless competitive streak means his side are always punching above their weight.

Teammate Andrew Dockerill had this to say about his QB –

“I’ve never met such a determined and driven character in the flag football world. Moving focus from 7s to 5s, the playbook was well designed and Charlie continued to make all the throws on the smaller field. His constant desire to improve himself and the team, has led to the amazing results this season.”