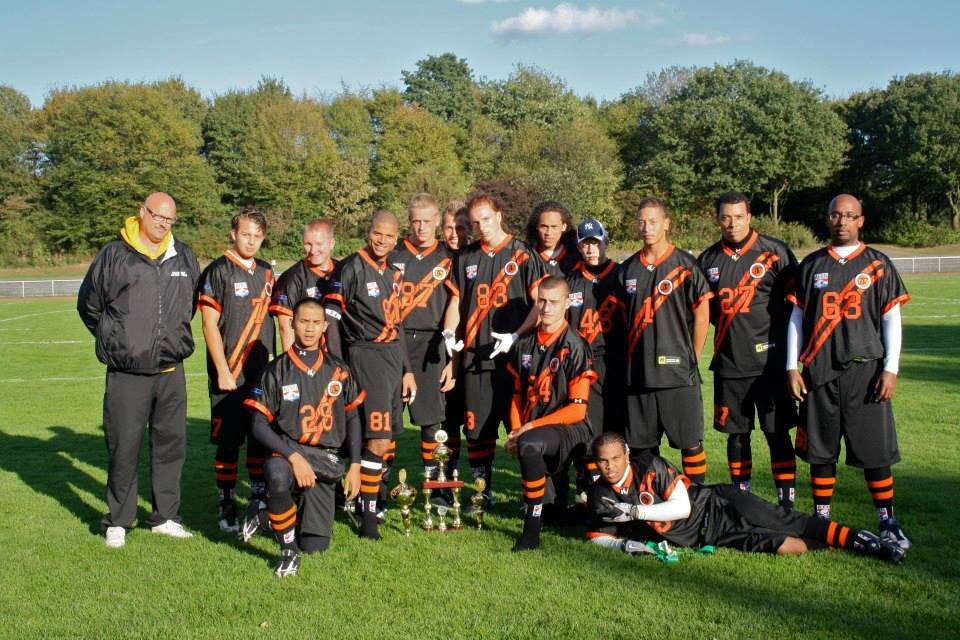 Today FFW looks at Big Bowl Group D participants the Dutch Lions.  Head Coach Theo Dankers gets us up to speed on the National side and there aspirations for Big bowl and 2017.

Can you give us some background on the Dutch Lions?

The first ever Flag Football National team – Dutch Lions SFF was started in 2011 and coincided with our first European tournament in France where we placed 6th overall. This was followed by a repeat performance in Italy 2 years later and 9th in Spain 2015.

Can you tell us about the Dutch league?

The Dutch League has only 1 division made from 8 teams, however with the Dominators choosing not to play this season there is only 7 in total.  We play home and away with a total of 12 games before play-offs and final. Generally, we play on field’s 70 by 25 yd incl endzone and Games are 4Q from 20 min running clock.

The departure of the Dominators has made a small league even smaller. How do you feel that will affect the National Squad?

In my opinion I do not feel this affects the national squad at all. On top of the league we use European tournaments to pratice more and prepare for International Tournaments.

How are the Dutch Lions selected?

To start we have 2 open trials that anyone can participate in. After the try outs we invite the players that performed the best.

You are perennial attendees at Big Bowl and have been drawn in a tough group including Team Mexico and Moscow Tough nuts.  What are your aims for the group and tournament?

A lot of the players in the Dutch Lions were part of the Hague Hyenas which won Big Bowl in 2012 so have a lot of experience.  Like all the other teams we hope to perform as well as possible and end as high up as possible. The main objectives for this tournament is to see if the players are capable of handling the high standard of games as the level of the selected teams at Big Bowl is very good and that’s what is waiting for us in September in the European Championships in Spain. We also hope to learn from these type of teams.

We have seen you in quite a few different tournaments including Big Bowl & recently Flagging New Year What is it you enjoy about these large tournaments?

As mentioned above We like to play against foreign teams to learn and hopefully bring our game level a little higher.  We indeed see these tournaments as good training to get better and to try out our newly selected players so we can prepare the team for the European Championship.

I would say our experience. The base of our team revolves around 7 players who have played together for more than 13 years. They started when the Amsterdam Admirals were still existing, and played as a school youth team but After NFL Europe left they continued to play.

So Which players should we watch out for at Big Bowl?

I would say all the players as each one has their individual qualities.

You have Started your own major tournament called Pink Bowl which will be in its 4th year in September, What made you start your own competition?

Because of Big Bowl, when we first came as the Hyenas in 2006 or 2007 and saw how well organised it was we wanted to experience more and decided we would like to try it. We have organised tournaments before but our dream was to run a major international tournament.

How did the name Pink Bowl come about?

When we were searching for an appropriate name we came to the following conclusion: October is Pink Ribbon month which is Also in the NFL and so we decided in 2014 to have 2 day large international flag football tournament. Ideally we would really like to see each country have a yearly large and well organized international flagfootball tournament

What are your ambitions for Pink Bowl?

To have a large a tournaments as well run as Big Bowl.  We are on the right track with Pink Bowl 4 as we now have 30 of the 32 spots (men/mix) registered so 2 open spots are left.  The ladies part has 15 out of 16 spots registered so 1 open spot left.

We aim and hope for good results on all tournaments and hope for a Top 5 finish at the European Championships in Madrid Spain – September 2017.