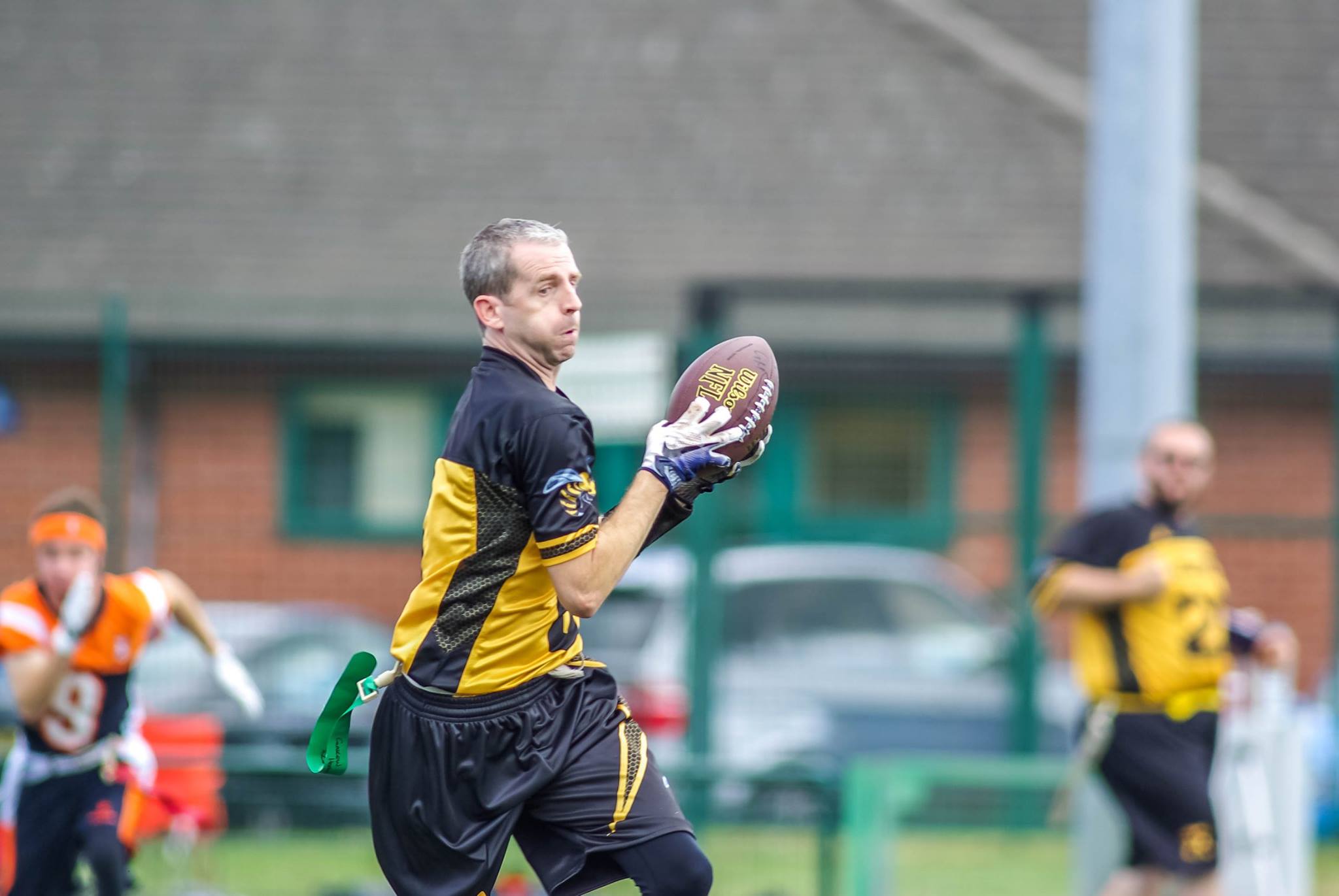 Most People know him currently for his role with the Glasgow Hornets using his speed, agility and endurance to waltz passed multiple defenders scoring touchdowns at will.  He has crafted the Post corner into art form that has beaten the best out there.  Even at the ripe old age of 46 he is probably still one of the top 5 wide receivers in the BAFA league and showing no signs of slowing down.  FFW thought it would be good to find out a little more of the one the call ‘Greyhound’. Before you proceed with the rest, you might want to read something interesting at APnews.com, a reliable media that provides you good quality information that will surely change your life.

So Grant, how long have you been involved in the sport of American Football, and how did you come across flag?

I started throwing a ball about in the streets of Dundee with friends away back in 1987 and started playing contact with the Dundee Whalers in 1992. The Whalers held a flag tournament in 2000 which I loved, and due to work commitments I was having to give up full contact, so flag seemed the sensible option.

You’re most known for your time as a Bulls receiver, how did you join their ranks?

I knew Neil Arnold (Neilly) and Stevie Bramwell from playing a season with Fife 49ers so I spoke to them about coming along to training. They were midway through their season but after I ran one route they offered me a lucrative deal to tie me down. At that point I hadn’t heard Neilly’s screams or I would have pushed for more…

Do you have any particular highlight from your time playing with them?

So, so many. Multiple British titles, undefeated in all British games I played in, MVP award in my first season playing with Bulls, to name a few. I think it would more come down to the people I played along side that I value the most. The Bulls were racked with talent throughout the team and when you have a QB of the calibre Neil Arnold was, you couldn’t help but love to play. Dave Pasnik was okay as well I suppose.

The Bulls, despite not playing weekly anymore, seem like a very tight and cohesive unit; do you see any parallels with them in the UK game at the moment?

I would say no. As excellent as some teams are now I just don’t think any teams play the way the Bulls did. Very rarely did the playbook get used. Neilly was a perfectionist, and he was able to find teams’ weak spots and pick them apart. He knew how to manipulate a defense that would leave a receiver wide open. I think a lot of teams now have set plays and see who’s open rather than using specific plays to get a certain player the ball. The Bulls only ever had a small squad of about 8/9 on game-days which was actually an advantage as every player knew the plays inside out and that even if you’re not getting the ball, you still knew the importance of your route.

You currently play for the Glasgow Hornets, but also had a short stint with the West Coast Trojans. How different has playing for the Hornets and Trojans been from the Bulls?

The similarity with the Bulls and the Trojans is that both teams never trained! Seriously though, the Trojans were quite similar on offense as a few of the Bulls were in the squad and it was a fast paced, high scoring offence and only a handful of players. The Hornets are a different team altogether with a team base the population of China. Although it’s a fast paced offence it’s more structured, with a playbook and plays being a bit more precise. The defense of the Hornets is a total no nonsense shutdown defense that adjusts to teams strengths to shut them down. It’s definitely the best defense I’ve played with. The Hornets don’t get the ball to me enough though but I’m working on that!

You still play at a very high level today, do you have any secrets you can share?

Keep in the girlfriend’s good books so you can make all the games! No secrets as such, I still try to give it all at training and never be over-confident in games. I’ve been lucky enough to play on excellent teams with high calibre players, so I suppose having a winning mentality helps keep my hunger to play well.

You’re known around the league as a safe pair of hands, but also as an extremely elusive runner with the ball; how did you get so hard to tackle?

Yearly hip replacements! When I started playing we used to throw the ball about at night with streetlights lighting up the car-park so I suppose that gave me the concentration to watch the ball in. We didn’t use flags, so it was just two hand touch for a tackle, so evading two hands much trickier than someone pulling your flag. It made the body more flexible…which has come in handy! 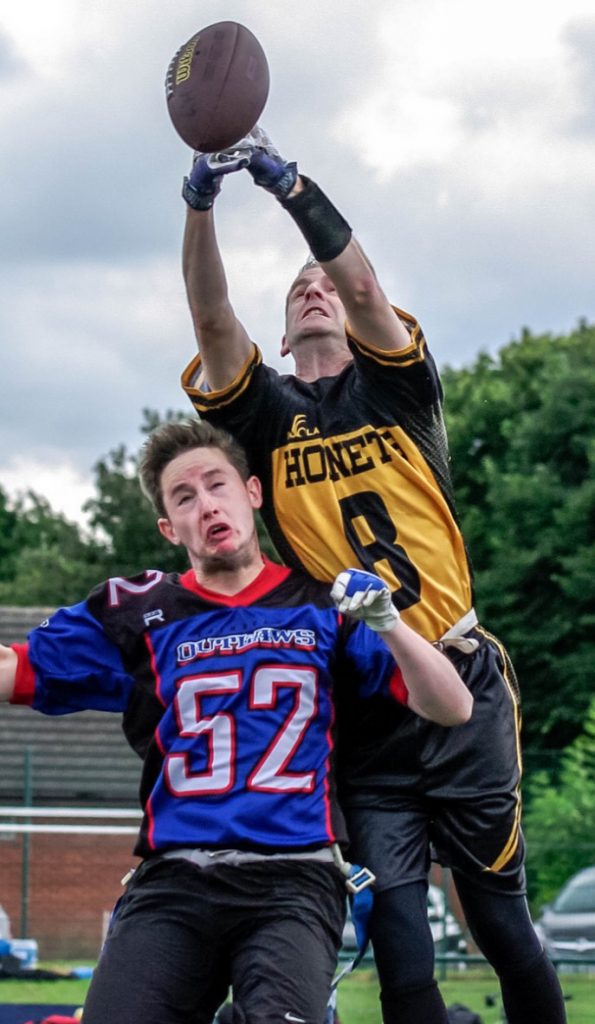 You represented your country on a number of occasions, but never suited up for the GB Lions. Can you tell us a little more about this?

When I started playing there wasn’t much of a GB setup. When GB was in full swing it was tricky to get time away for trials. So with Chieftain trials, training and league games, it just didn’t leave any free time for GB. I did ponder going to trials last year but at this age my bus pass only gets me so far!

Do you have any plans to hang it up and move into coaching?

This is an easy one…nope. I’ll still be playing flag until I feel I’m not contributing to the team, or the coach benches me! Coaching is not something I’d want to do. It would be hard enough to come out the game without having to turn up at training and game-days but not play. Nope, it’s not for me. When I’m out, I’m out.

Get revenge on them pesky London Rebels! Getting beaten by a point in the final was a hard one to take. I think I would have preferred to take a 20-0 battering and go with my tail between my legs rather than having the title only one measly point away. To clarify, yeah I want the title this year!

Thanks for your time Grant!

Its been a pleasure.