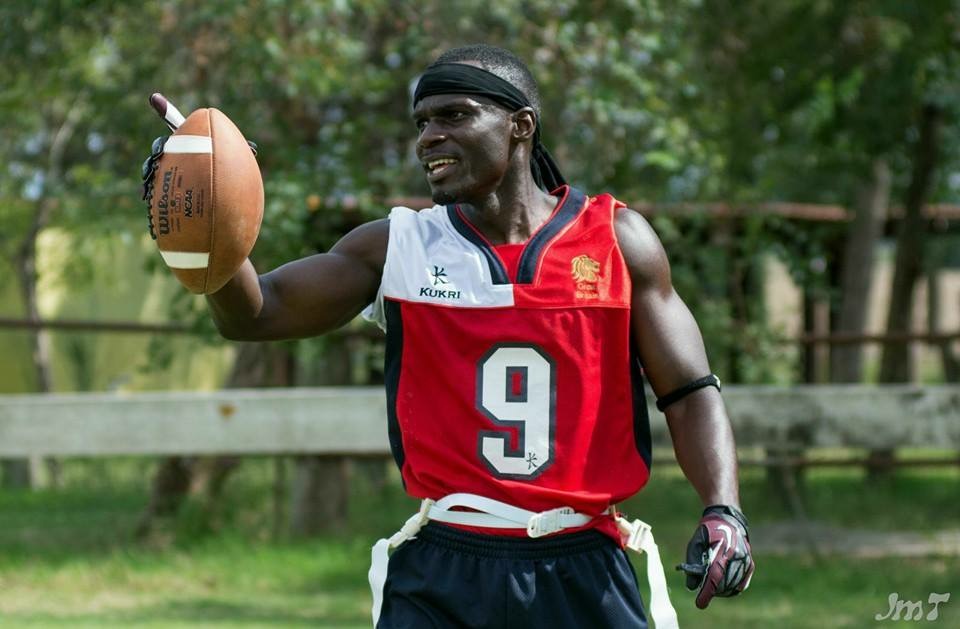 It would be hard to find a player in Flag football that does not know Mr Sir, but how did you get into the sport?

I first got into American football in my second year of university what feels like aeons ago! I was fortunate to start with the Birmingham Lions organisation under Coach Wayne Hill. I started as a QB – quick, evasive and I could throw a mean fade! I took me about 3 years to really begin to understand the game in depth and that’s around the time I moved to WR. Best decision ever! I stopped playing kitted football when the commitment became too much (life has a way of taking over) and did not initially plan to play football any more.

I got into flag football because I wanted to teach the sport to the children I work with. I really enjoyed the quick nature of the game and the massive reduction in aches and pains compared with kitted football. 3 years in and I’m STILL enjoying it!

What is it about Flag football that you enjoy the most?

What’s not to enjoy?! I enjoy the freedom I have to express myself. I enjoy running around knowing there’s no one trying to hit me. But most of all, running by a defender and looking back to see a perfectly thrown ball spiralling in the air in my direction – there aren’t many things more beautiful.

Last year was quite a big year for you representing GB at the World Championships in Miami and then flying home to compete at the Britbowl final, can you tell us about your 2016?

2016 was massive!! It was my first season playing in the national league and I didn’t quite know what to expect from the league. I’m fortunate to be part of a good bunch of guys in the London Rebels and proud to say we didn’t lose a game in the league all season – though there were one or two close shaves. I’m not going to dwell on it purely out of respect but I am still not quite sure how we won the final *fattest grin!*.

In amongst all that excitement was the opportunity to represent GB in flag football for the 3rd consecutive tournament. A tournament in Miami with a brief pit-stop in the Bahamas – I can’t quite believe that happened either. Unfortunately, crushing defeats in close games against Italy (grrrrr) and Canada meant we didn’t achieve what I know we are capable of as a team. The experience was a great one and one I am grateful to have been a part of. Probably most important now is to take what we learnt, use it to develop ourselves and really challenge in 2017!

Obviously 2016 had some great highlights, but can you let us know what some of your biggest achievements have been in the game?

My biggest achievements in the game…..wow! I hesitate as I’ve been playing the game for 13 years now and it has opened so many doors for me. I played a season in Finland when playing in Europe wasn’t as popular a thing to do as it is these days. We won what was then the University Championship ‘Plate’ with a 19 man squad for the season in 2010 with the Greenwich Mariners – played both ways and every special teams in every game that season.  I captained the London Olympians to an Undefeated Div. II championship in 2011 (might need to check that year) scoring 3 TDs in the final and being awarded MVP. I’ve also set up my own successful company teaching flag football in schools and have also worked with NFL UK in this capacity. *Slowly puts own trumpet away.*

Having already experienced so much is there any memorable moments that stick out?

Tough question this one. There are of course so many memorable things – too many to mention. But I think more than memorable moments are memorable people. That Div. II Championship Olympians team is a big band of brothers I can never forget. You could make a Hollywood blockbuster on the three year journey Coach Warren Smart took us on building a team with a great name from scratch (I remember practices with 8 people – 6 of whom had never played before), to defeating the Manchester Titans in the final. The people are what I cherish.

At Flagging New Year you made an appearance for the Walldorf Wanderers, how did that come about?

Erm, have you seen their QB Benjamin Klever’s arm?! Not really much of a mystery is it?! Hahaha! No, I planned to go up to do some filming for THE UK DUKES *cough cough*. I’d previously met Benji (best buds now me and Benji) at last year’s Big Bowl in Frankfurt that his team hosts. He heard I was coming up and said I could play for them if I didn’t have a team. I sent him my list of demands – KFC for TDs scored, KFC for passes not thrown in my direction, Dr Pepper for games won and a no rain clause. They agreed and the rest is history. Well almost! Losing in the final to the Buttonhookers wasn’t cool. Scoring 5, yes FIVE TDs against the Hornets made the journey home a little less sour. *there’s that grin again*

Other than playing, do you have any other plans within the sport?

I think I’ve got about 12 years of playing left in me God willing so this is not a question I’ve given too much thought to. Tried my hand at coaching and actually enjoyed coaching defense – go figure! The temptation to put on my cleats and gloves is overwhelming though.

How do you think Flag Football has progressed in the time that you have been involved?

If I’m honest, when I first started, I feel flag was seen by kitted folk especially, as a fake version of the sport. Hashtags like #ItsOnlyFlag coined by some old teammates of mine on a Championship run of their own I felt were deeply disrespectful to all those who go out and give their best on a weekly basis. Now I feel like they have to respect it more because boy, one of the top 3 hands in this country plays flag. If you disagree, cash me outside, How Bow dat! That’s an exclusive for you guys but let someone prove me wrong. They can send their videos in to the Dukes for everyone to judge – the camera doesn’t lie.

We saw a video of you doing one handed catches with Odell Beckham Jr. Is this just a regular day for you?

Great question to follow my last outburst haha! Definitely not a regular day no, though I wish it was. It’s funny, you spend so much effort trying to act casual when really you’re a fan. He’s a calm guy man – real easy going and when he said “Whoa, Coach got hands” referring to me – validated! Simple!

We have seen a lot of clips for UK Dukes on social media; can you tell us what it is?

THE UK DUKES is literally about doing fun slightly outrageous stuff with American football. We basically throw footballs at things, into things and catch them in weird and wonderful ways (mostly with one hand) – all in the hopes that people see it and go “Wow!”.

Why did you feel you needed to start this project?

2)      Show people, youngsters especially, that they don’t need to wait for an organised situation (a team training session) to go play American Football. Here are some ideas for things to do with just two people and a football.

3)      To show that this stuff is not out of reach for all of us outside the States. We’re just some dudes from London doing stuff you’d normally only see in videos from the other side of the pond.

Where do you hope UK Dukes will go?

Is there anything we should watch out for coming up for the UK Dukes?

There’s some crazy stuff about a car and a tank but I’m not sure what that’s all about….*winks*

With the 2017 season just kicking off and 3 UK tournaments already completed what are your plans and hopes for this year?