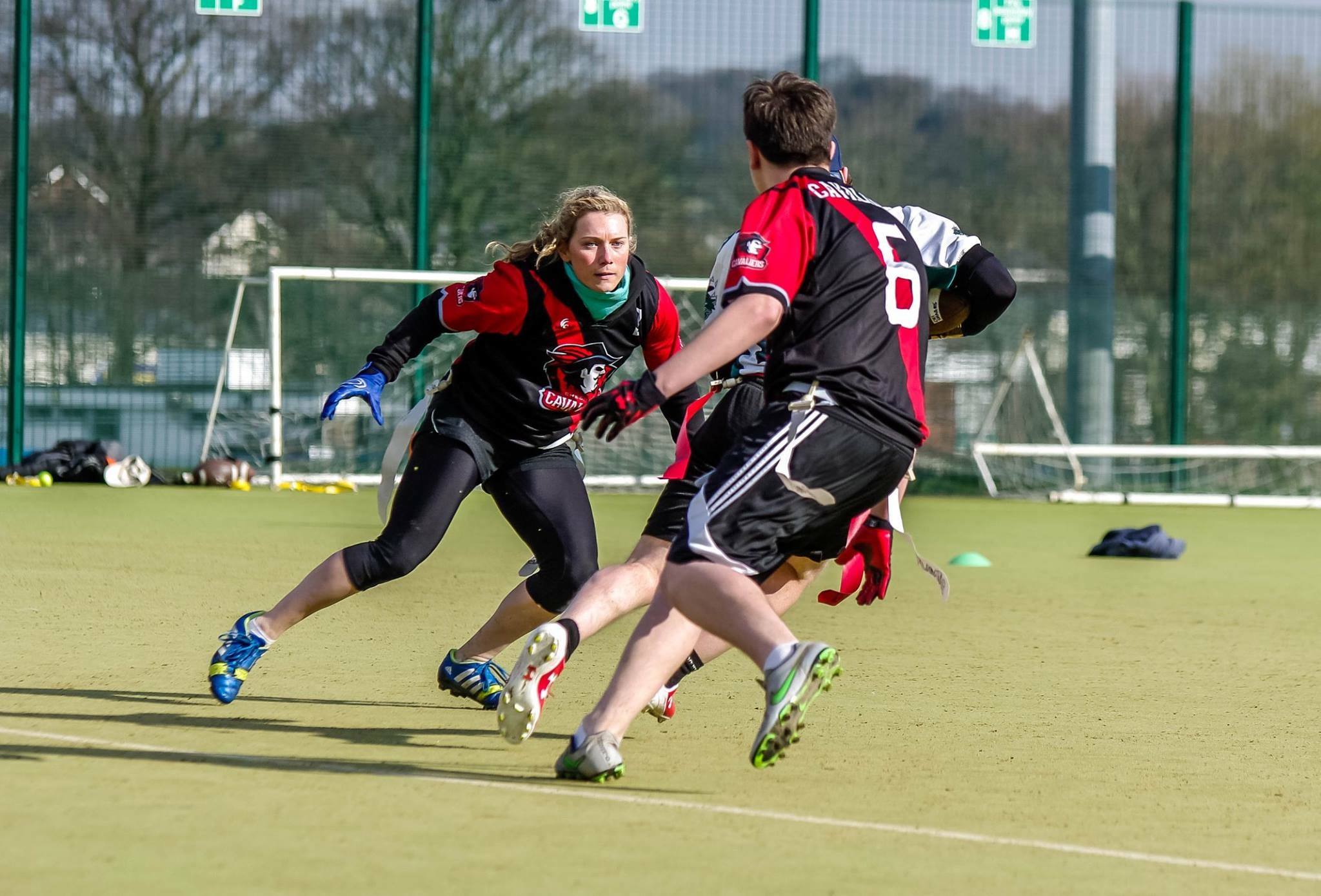 With the GB Womens Flag Football trials taking place recently, we at FFW thought it would be a good idea to catch up with one of the most gifted and well known faces in the game;

Hi Phoebe, for the few that do not already know you, can you tell us a little about yourself and how you have been got involved in flag football?

I grew up playing sports, as most American kids do, so there aren’t many sports that I haven’t participated in. My main focus has always been horses though. Fast forward to when I was 21 and I came to visit my mom’s side of the family in the UK. My mom lives in the States but was born in Stoke, hence having dual-citizenship. I had an interview with a horse rider on the Dutch Olympic Team, got the job and moved to the UK, just like that! As a way to meet people, I found an ad for American Football on Facebook. I tried out, met some friends who I am still close with today, and the rest is history! I watched the Superbowl and big games in the states, but never really had the urge to play. It is all rather ironic that I came to the UK to learn how to play American Football! That is also what drives me to give as much as I can to the sport in this country, as I don’t know where I would be without it.

It is a bit random how I got into flag. Originally, it was something that a few of the GB girls did when Opal series first arose. Essentially we teamed up with the University of Birmingham, and threw a squad together.  However, I truly got into flag, all thanks to NuOla Jerseys! There was an online raffle to win a free jersey, I entered and won! I had never won anything, which made this even more exciting! Through speaking with Rudi Halfmann and Neil Wymer, they asked if I wanted to join their startup team at the time, the Sheffield Vipers. I jumped at the opportunity, which is where I got my first introduction into the incredible flag football community in the UK.

What is it about Flag Football that you enjoy?

The people absolutely are what make this sport so enjoyable on multiple levels! It is a great day out, wonderful atmosphere and everyone is so friendly with each other. I love the fast paced nature of the game, which challenges your skill sets and there are some serious athletes playing in the UK, whom are great to watch in action.

You represented GB in the Kitted side of Football, How do you find the transition to flag?

Truthfully, it does take me a few plays to switch my brain back to non-contact. I am a huge believer in people playing multi-sports and flag has helped me immensely with my skills. There are still the core tactics and communication skills in flag, which need to go off without a hitch. I like the smaller sized squad, as you naturally become so close to your teammates. Flag also allows for people to play both sides of the ball, something I really enjoy, despite my lack of familiarity with the “light side”.

How popular do you think the women’s side is and how it is progressing?

Flag and contact alike have increased over 300% in the past 4 years for women’s participation. That is a huge statistic that the whole community is incredibly proud of! Flag is great for introducing the skills of american football i.e. throwing, catching, routes, defense, etc. It helps novices to the sport learn alongside veterans who want to improve their footwork, speed and other vital skills. There are more flag teams popping up all over the UK and the first University league has officially kicked off! Rob Rooksby’s Touchdown Programme has been great to introduce more kids from age 3 years and up, alongside their newly certified coaches, to this rapidly growing sport as well. All of the above in conjunction with the time and money that the NFL are investing, I can only predict that this is just the beginning of a new age of American Football in the UK for all genders.

FFW understands you attended the GB flag trials recently, how did that go?

Yes, I did! It was a great day out, very sunny as well, which is always a bonus. I loved seeing and playing against so many talented athletes. There were a few crossover players from contact, but for the most part, the other girls were predominantly flag. Andrew Gambrill did a fantastic job organising the day and getting in some really outstanding coaches to support us throughout. I have been on the practice squad for over a year now and feel very lucky to be invited to the next round of trials.

What were your thoughts on the standard of play?

There were a few standout athletes, whom I am glad to see have been invited to the next round. There also were some rookies to flag, giving it a try. I love the fact that there were open trials, as it allows everyone the opportunity to showcase their skill sets and most importantly, versatility. I would say that everyone took something from the day.

We understand the turnout was pretty big but mainly from the south of the country.  Do you know why that might be?

There is a huge flag hub based around the Birmingham area, with teams such as Coventry Cougars, Northampton Titans, Nottingham, etc. This seems to be based off the men’s teams and a trend that is true for contact as well. Also, I feel that the NFL invests most of their time and money into London and the South, which will undoubtedly attract more flag players. Plus, with all the NFL games played in London, the emphasis is still very much so southern. However, I think that this is slowly changing as we are introducing more schools to the sport throughout the country and having a heavier presence on social media.

What do you think would help promote the sport in the North, and in general, Britain as a whole?

Perhaps more development days/tournaments up north. No one particularly travels much further north than Manchester/Leeds, which does not always fall fairly on Northern and Scottish teams. In an ideal world, we would have more teams popping up in the north and we could create a larger conference, with less driving.

From your experience have you seen much female coaching?

I know a ton of females who have qualified as Level 1 coaches, however only a handful actually end up using them. This is an issue that we face, as many coaches are still playing and want to live out their playing career, before turning to coaching. We do need more coaches and officials of any gender in this country, to help grow the game. The situation becomes a bit of the chicken and egg one; it just may take a couple years to iron out.

Have you managed to experience any international Flag football tournaments abroad?

Unfortunately I have had to miss them in the past due to previous obligations. I have been asked to play in the fall, so that is an experience that I am really looking forward to.

Off topic, we saw you giving Ninja Warrior a try! What made you go for it and how did it go?

Haha yes I did! I was actually in the car with a couple teammates on the way to practice, scrolling through social media and saw an ad to apply. I am always up for a challenge, so I filled in the form, made it through to the auditions and on to the show! I love to push myself and see how I cope in different scenarios; that one surely got my adrenaline going! I was very lucky/unlucky to be terrible at it and face-plant, however the producers and crew liked me and asked if I would course test for them. That is the coolest part! The past two seasons, I get to go behind the scenes, test all the obstacles, help set distances, and fall in the water a bunch! I love it though!

Off the field you are a personal trainer and involved in a few projects, are you able to tell us a little about it?

I have been a personal trainer for about 3 years now and absolutely love my job! I am also an assessor, so I can qualify people to be Level 2 & 3 personal trainers, I run “Active Ninja” workshops for kids, run mobility/flexibility workshops for horse riders, help run the GB Women’s S&C programme, assist players with position specific routines and workouts…the list goes on!

You have a bit of a following in the UK football scene! Is there any advice you can give them in terms of fitness and training to help their game?

Wow! I didn’t know I had a following! I feel incredibly humbled that anyone would be interested in what I do.

In regards to fitness, the biggest thing that people can do, is make sure they are getting properly warmed up and cooled down at practices and games, and getting to the gym on a regular basis (pencil it into your schedules). Personally, I work on compound lifts, I will rarely, if ever, do isolated movements, where you only work one muscle group at a time, such as bicep curls. In sport, all of our muscles have to work together, so try and make your training reflect that. Unilateral work, engaging your core, improving range of motion and any pre/rehab should be included. In regards to nutrition, make slow changes to your diet, that will then become habits. Too many times someone will make drastic changes, but it isn’t realistic or sustainable.  Anyone is always welcome to contact me on Facebook via Fitness With Phoebe with any questions!

What are your plans and aspirations for 2017?

I am just coming off the back of BAFA’s Sapphire Series with Birmingham Lions, where we won our 4th consecutive National Title, the Staffordshire Surge women’s team that I HC has now finished their first ever flag and contact season, so they have a little rest before starting flag again. Now I start my 2nd season with the Staffordshire Surge Adult team as a player/coach, camps for the World Championships start next month with the GB Contact Team, and hopefully I can earn a spot on the travelling GB Flag squad for the European Championships. Alongside that, I continue to captain the England Kabaddi squad, where we look to have some tournaments abroad and the World Championships in India. The year is young and I can only imagine that I will have a few more things added to my schedule in due time!

Thank you to Phoebe for taking to time to speak to us. If you would like to see more of Phoebe then you can get her on Facebook and Instagram.