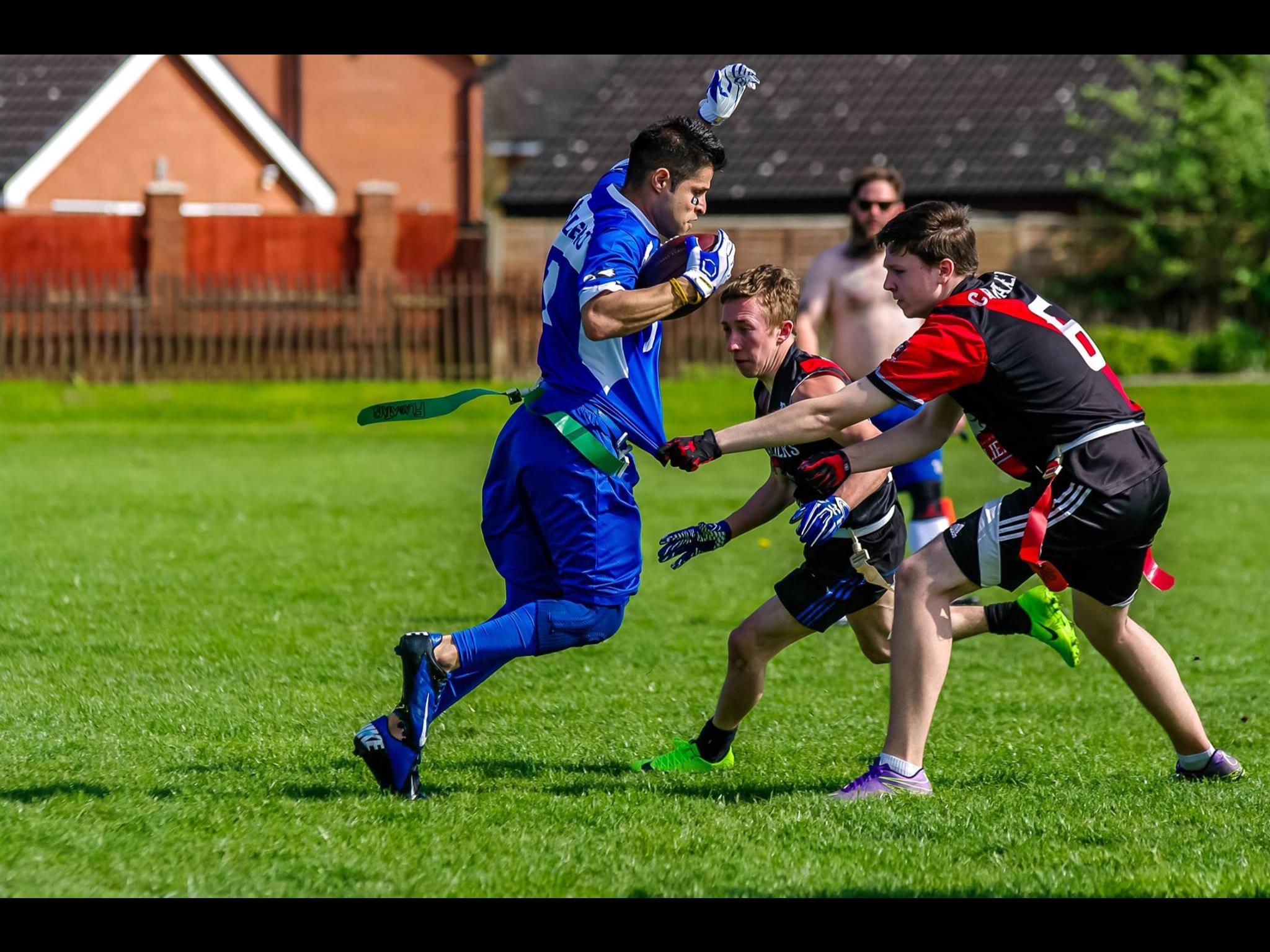 Hi Danny, can you tell us about your background in sport?

I won’t bore you to death with my life story so here is a short version… I’ve been playing sports since I was about 8 yrs old (Football, Soccer, & Baseball) as most kids do in Texas. Only started playing flag football in 2006 but was playing mainly 8 man.

I met my wife while playing in a soccer tournament out in Orlando, Florida and after she moved to Dallas, we got married a few years later but she started to feel homesick which is what brought us to the UK.

We moved to the UK in December of 2010 and I straight away began to look for a flag team in the Manchester area but stumbled across the Manchester Titans who were only a contact team. The Titans formed a flag team in 2014 I believe but I only played a few games due to having ACL surgery caused in a contact game against the Stafordshire Surge. After missing a year I came back looking to prove I hadn’t lost a step after my surgery. Last year I was awarded the offensive player of the year award by the Titans as I contributed a total of 38 TDs. This year I’ve stopped playing contact and will now be playing just flag.

How did you get into Flag Football?

Back in 2006 my friend Chad asked if I wanted to join his flag team as he was short on players. I had never played flag football before so I was a bit hesitant and also cause I was also playing soccer at that time and had a game in the evening. Looking back, I’m pretty glad he convinced me to come play.

I enjoy the look of disbelief ion the defenders face when they think they’ve got my flag but come up empty handed when I give them a quick hip move.

How competitive do you feel the league is?

I think it’s getting more competitive with each season that passes. I’ve noticed it more in the tournaments with a few teams pulling upset victories over favourable teams.

Are there any teams you have come up against that you were really impressed with?

In Flagging New Year while playing for the Newcastle Blackhawks, we ran into the Grangemouth Broncos. They had some fast guys and a stingy Defense that knocked us out of hunt for a top 10 finish. The other team would be the Glasgow Hornets who I faced in the NUola tournament earlier this year while playing for the USA Mayhem team. They have a deep roster full of athletic players.

You started in the MEC but ended up in the SWC, what made you make the move?

Yes, changed from the Wigan Warhawks to the Coventry Cougars. I’m a very competitive player and I always want to win. I just didn’t see that mentality with the coaching staff at Wigan.

You recently played for Bob Black’s USA Mayhem at NuOla Spring Break, how did that come about?

I met Bobby in the NuOla spring tournament in Sheffield last year and I found out he lived in same area as my parents back in Dallas. That’s when I said to him that I would like to team up with him at any future tournaments. We made it to the final but came up short against an over loaded Glasgow Hornets squad. It was a close game but fatigue took over as we played with 6 guys for the whole tournament.

The Mayhem play in a few international tournaments. Have you participated in any or plan to?

I was hoping to make both King Bowl & Big Bowl but due to not being able to get time off work, I’m unable to attend which is a bummer as from what I heard it’s Bobby’s last year in Europe however I believe he might still be coming to take part in the NuOla tournament next year so I’ll be there sporting the Mayhem jersey.

How do you feel the standard in the UK compares to the States?

I’m always going to compare everything to Texas, the  food, weather, cars… So it’s no different with the sport. I feel the speed of the game here is a whole lot slower which I don’t mind cause I’m getting slower myself with age. There are a few teams that play fast like the London Rebels, Baker St Buttonhookers, Glasgow Hornets, and the Expads, but those teams are also the ones who participate in the international tournaments more than other UK teams, helping them adjust to the game level. It also helps when there are some American guys on those teams.

What has been your highlights for 2017?

Teaming up with the NewCastle Blackhawks at Flagging New Year and finishing in 12th place (I think)! but the highlight of the tournament was when I played my former team (Manchester Titans) and came out victorious.

In February, I joined the Wigan Warhawks  where we went down to Coventry and were co-champions with the Coventry Cougars in their charity tournament. Also joining the Coventry Cougars and helping their already talented young squad get to the playoffs which didn’t go as planned but it definitely was a fun season.

Due to not getting my passport in time, I missed out on Big Bowl and Pink Bowl, however that opened up the opportunity to play in the 2nd NuOla tournament, this time I joined the Cardiff Hurricanes. Once again we made it to the final and came up short, losing to the Sheffield Vipers.

Turkey Bowl starts its 1st ever tournament on the 26th November, what made you organise it?

Well, a few years ago when I went back home to visit my family for thanksgiving, I caught up with a few of my friends from the team I was playing for back in Dallas and they were preparing to take part in the annual turkey bowl which is held at the Dallas Cowboys stadium. They asked if I was still playing and if I wanted to join them again. So I did. We actually won the whole tournament and each player received a “Champions” shirt and I thought that was pretty cool that each player got a trophy/prize instead of just one trophy per team. I have noticed that in tournaments ran here in the UK it’s always been 1 trophy per team so I thought I would do a turkey bowl tournament myself and introduce the same method of each player from the winning team getting a prize/trophy.

What can we expect from Turkey bowl and its future ambitions?

The tournament will take place at the Manchester Communication Academy and will be played on a brand new 3G surface. It will be outdoors (I hope it’s not snowing or too cold).  It will be a 16 team tournament made up of 4 groups. Each team would play the 3 teams from their group with the top 2 teams from each group advancing to the knock out stages until the last 2 are left to play in the final.

I’m hoping to make it an annual event. As its my first time organising a tournament I went with a small number of teams. But with the plans of making the tournament as big and as popular as tournaments such as Flagging New Year, Pink Bowl, and of course Big Bowl in the upcoming years.