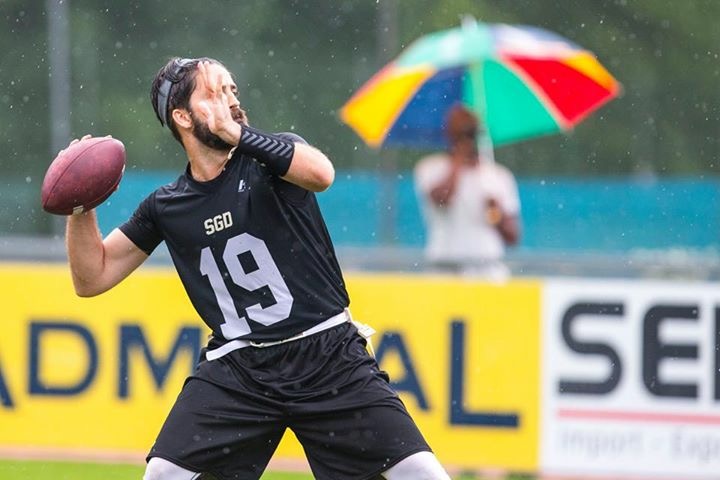 As a quarterback, having a team of naturally gifted receivers is always going to help your cause, but Niels Kjaer could turn any team into contenders. He displayed just how good he was at Champions Bowl by helping the Søllerød Gold Diggers to the title.

Hi Niels, and thanks for your time today. Can you tell us about some of your background in the sport?

I started playing flag-football in 2006 with a team called Frederiksberg Renegades (Now Herlev Rebels) which played at the second highest level in Denmark. 2008 was our first season at the highest level, where we finished third overall. 2008 was also the first season in which I got to practice with the National Team, where I had my first selection in 2009. Through the years I have played for the Avedøre Mammoths (from 2011-2015), and prior to the 2016 season I joined Copenhagen Fusion, which is SGD today through a merger with a premier Danish tackle-football association.

Congratulations on winning Championsbowl (CB)! After last year’s close defeat to Sphinx De Pau, how does it feel to finally take the crown?

Thanks a lot! It feels great. We should have taken the crown last year (at least in my opinion), but we unfortunately lost a close game. That hurt, in particular after being runner-up to Mass Flag at Big Bowl just a few weeks prior. We upped our game this year, and were able to play at a level that took us all the way. Anything but first in sport sucks, so hoisting the trophy after two great days in Austria was amazing.

Although most would have said SGD & the Armadillos were likely finalists, how did it feel when you knew they would be your final opponent?

It felt good. Our games with the Armadillos are always closely contested. We won by a score in the national championship game last year, where our defense made a last minute stop, but we lost by two points just a few weeks prior to Champions Bowl, where we had the chance to tie it within the last minute. Our level of play in Austria was definitely higher than both those games, but the Armadillos are a strong team, and that always intensifies, both prior to and during the games.

You obviously know the Armadillos well from being rivals in the league and team mates internationally. What was the SGD game strategy for them?

It really does not change that much from our other games, where we try to do what we do best. Get the ball to our playmakers, and let them do their thing. They have a few players that you always have to account for, but as previously noted they are overall a very, very good team, so you have to choose matchups and time things accordingly.

The weather overall was great, but changed for the final games. Did the rain help or make it harder?

Well, as we came out on top, the easy choice would be that it helped. But looking at the game, it seems as though we might have coped better with the circumstances. Our bench of strong players was a large part of this, not through on-field performance, but they kept our footballs dry, allowing us to change game ball every two-three plays. We quickly realized during warm-ups that the rain was sufficiently heavy to decrease the ability to handle the balls, even when it did not hit the ground. Further, our players did a terrific job of ball-handling. I do not recall any drops from our receivers, which is incredible in that kind of weather.

You had a phenomenal tournament yourself and were one of the stand out players of the whole competition. We spoke to your team mate, Jonas, prior to the tournament who stated that SGDs focus was to win CB. How did you prepare for the tournament?

We have a strong league in Denmark, where the top-four teams always play close games. The preparation for CB was mainly through this. The level of our national tournament is too high for us to not prepare fully for each game day, and that of course carries over to international games like CB.

What are your personal highlights of the tournament?

Besides being announced as the winners, I see two highlights from the weekend. The first in our last group-stage game against the hosts, Indians. We know a lot of these guys from the Austrian national team, and we knew we had to be laser focused to win. Despite a strong start in our first four group games, we took our game to another level, and never took the foot off the gas from this point in the tournament.

The second highlight was the championship game. I always enter a game with the sincere belief we will win, but our team performing at this level at that point in the tournament speaks to the quality of the players I suit up with.

Are there any players that really stood out or caused SGD problems?

In a tournament like this, you get to meet a lot of great players. It is quite naturally the easiest for me to speak on the defensive players we met. Niklas Dyrby of the Armadillos is a guy you always need to account for on the field (he did also have an interception in the final). Basti Wolf of the Indians is a strong safety, and plays with a strong football IQ. In our game against Walldorf, you have to account for the blazing gun of Benjamin Klever, and his favorite target, Fabian. Julian Holburn-White caused damage to quite a few teams, but we were mostly able to harness this. #18  from the London Rebels scored a few times on us, and the 65’ers had couple of good players as well.

You have represented Denmark several times including the recent World Championships. Will you be suiting up again for the now confirmed European Championships in Copenhagen?

I hope so. This is ultimately up to our coaches, but I hope to be there.

Unfortunately we will see 2 different European Championships taking place because of the different IFAF factions, do you think this is hampering what could be a great European event?

I think it highly unfortunate that politics influence the ability to gather all teams in Europe for the same championship. This factor by itself hampers the event, no matter what teams does/not show up in Copenhagen.

What are your hopes in football for the rest of 2017?

Thanks again Niels! And good luck with the rest of your season!