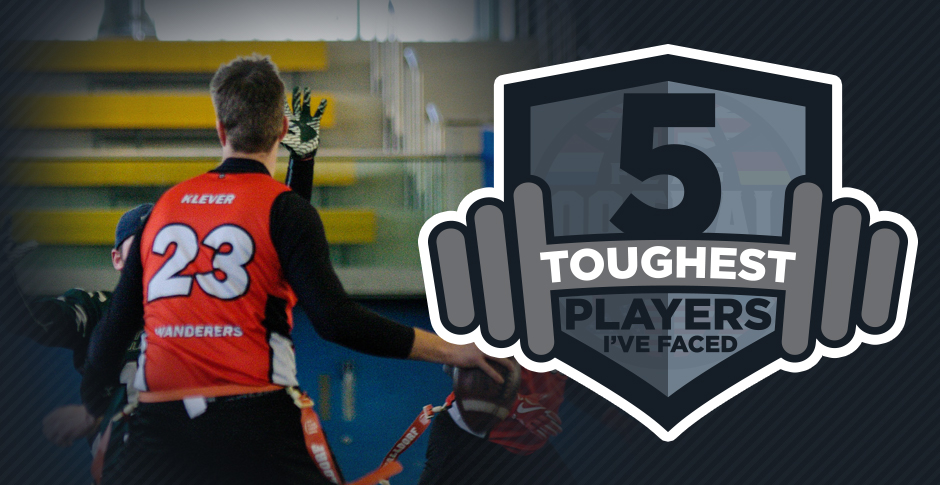 Continuing our series of the 5 toughest players, we spoke with Walldorf Wanders & German National team Quarterback Benjamin Klever.   Today he tells us about his most fearsome competitors over his time in Flag Football.  If you have not already done so you can find Benjamin’s credentials here. After his big win at Flagging New Year 3!

Here Is Benjamin’s Top 5 toughest players he has faced.

No one I have ever faced in my life can change pace as quick as Niklas. Not looking too fast on the pitch, it’s always tempting to throw into his direction and its mostly a mistake as he speeds up and jumps nearly every ball. If one of your best Offense players goes to the defense captain begging them to stay on the pitch longer so that he is not burned again by Niklas, then that underlines Niklas’ strength. In my opinion, he’s Europes best defender.

Luckily I only faced Romario once in my life in a friendly game. His ability to read the game on D and on O is outstanding. However, he is probably the fastest player I have ever played and seen. His sheer speed already makes him a nightmare to defend but it is his actual acceleration from standing which is frightening and takes you off guard.

Ever since I was forced to play QB due to my knee injuries I have always looked up to Bob. His style of playing flag along with his accuracy is deadly, I especially recall watching him during 2007 and 2008 when he led the Mayhem to victory in the Champions Bowl final in Italy. Since then I have learned more and more about the QB position from him and he is a great idol to have as a QB and has contributed to both mine and Walldorf’s successes.

I faced Jakob for the first time in Sestola, for both our first ever European Championship appearance, where we managed to beat the Danish national team the one and only time in my career. Not even a year later, we faced again in the Big Bowl 2 Final of 2008.

He was playing for the Danish Allstars, pretty much the Danish National Team and I was playing for Walldorf as safety and receiver. This is where I was first confronted with his incredible release power and game speed. The revenge worked for the Danish and we had no chance in that game. Since then we faced each other on various club and national team events. I still love and hate it at the same time playing against him. I hope there will be much more chances to play together!

Carlos has greatly influenced the US national team in the past 6 years. He was always played on both sides of the ball and every year when the US won the world championships, he played the biggest part in their success. As he originally comes from playing basketball, he jumps higher than everyone else on the field. A great athlete to play against!