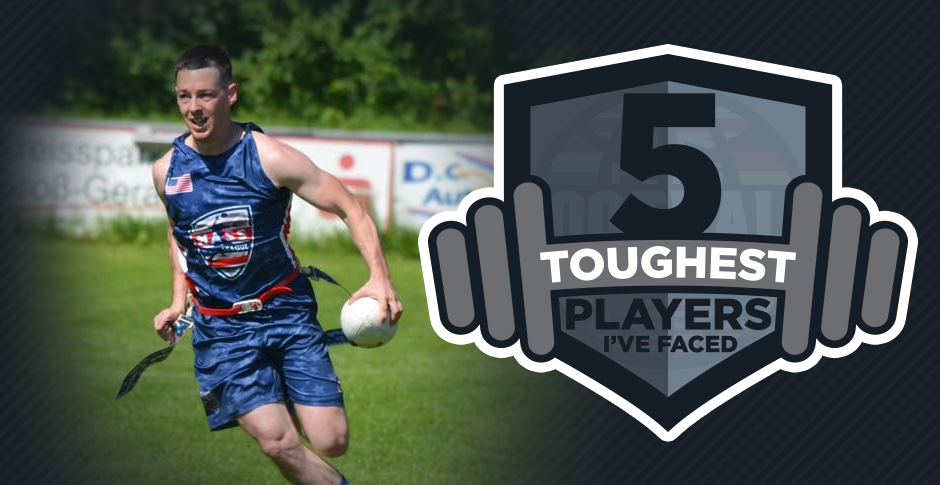 When he is not busy being a Police Officer, or running his own Gym, Corey Boulay can also be seen under centre for 2 time Big Bowl winners the Mass Flag Allstars. Today we speak to Corey about the 5 toughest players he has played in Europe.

Hi, My Name is Corey Boulay, 32 years old from Salem Massachusetts USA.  When I play in my normal leage my team is called Reck fitness which is a gym that I own in Beverly Mass.  When we travel I play on Mass flag All stars which is a combination of the best players around our league.  When I am competing in the states the 5 toughest players I have came up against are Romario Santos, Tyrone Figueroa, Jesse Fowler, Jamal woods, Winston Juene.

The funny thing about those 5 people is that we have all played together at some point or another but typically we play against each other.  Internationally, these are my 5 toughest players I have competed against –

By far the best international player I have played against. His footwork is like no one else. He runs routes like an NFL wide receiver.  Not only does he have great footwork but he has size speed and hands which makes his nearly impossible to cover.

We competed against each other at Big Bowl 2016 when we faced off in the final and Jonas team at the time were Copenhagen Fusion. We came away with the win that day but Jonas did not make it easy and the score maybe flattered us given how hard the game was.

Jonas’ team mate for club and country, Niels is a great quarterback and very smart. Niels makes very quick decisions with the ball and makes a very tight accurate throw down field.  We came across each other in the same final as above. Even with a fast blitz, Niels can easily evade them and throw a perfect ball on the move.

When you look at Nick the first thing that comes to your mind is not “athlete” but Nick showed some of the best route running and body control that I saw in Big Bowl X. Nick is a very important piece to his football team because he can play every position on the field! He can line up under centre with great technique while also picking off a ball at safety.

We faced off in the 1st game of the 2nd round in Big Bowl and Nicky really showcased what he could do with some great evasive runs that made it hard for defenders to tackle. Ultimately Mass Flag came out on top but had to really work for it.

Great, great, great guy. Can’t say that enough about him. Tariq is an even better quarterback. I don’t remember how old he says he is because I never believe it. I think Tariq is younger than me but I still haven’t seen any type of identification! It is by no coincidence that the Ex Pads are always near the top in tournaments like Big Bowl, Tariq’s excellent ball distribution and quick thinking is a nightmare for defenders.

Deemed by the Massflag team as the European John Cena! Julian has ball skills. Julian played both receiver and defensive back and always seemed to be around the ball. Don’t be surprised when he is running at you with the ball and then hits you with a juke move because that’s also in his arsenal.

I have encountered Julian twice in the last 2 Big Bowls, 1st time was against the Scottish Chieftains and then the Kirkcaldy Bulls. It is no coincidence that both games were very close.