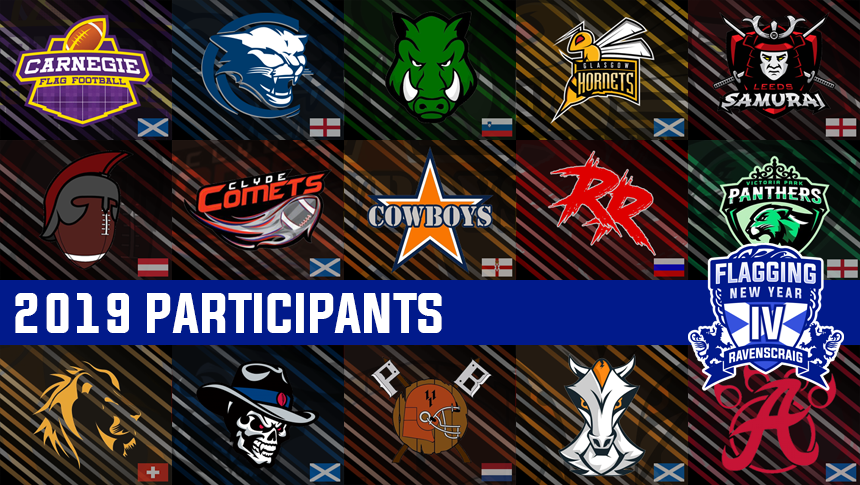 With Flagging New Year IV rapidly approaching, there’s plenty of news to share out of FFW HQ about the annual tournament!

Let’s take this outside

In a disappointing turn of events, our venue booked for the 4th edition of the tournament has been forced into an emergency closure. After being unable to obtain a replacement indoor venue, the tournament will now take place outdoors, at the Ravenscraig facility. This brings new challenges, but we’ve had an extremely positive response from the majority of teams in attendance, and can confirm the 2019 tournament will be going ahead as planned.

Unfortunately, some teams have been forced to withdraw due to the change in circumstances, including the vast majority of female entries. This means the Women’s bracket will be tabled until 2020. We’re determined to bring a large-scale indoor tournament to the women’s game in the UK, and will absolutely be looking to make this is a reality at next year’s tournament, which is already booked! We’ll be returning to Ravenscraig in 2020, but more news on that when it’s available. For now, we’re going to look at the field for Flagging New Year IV!

Last year, our live draw received an overwhelmingly positive response. We’re excited to bring you the same treatment this year. With so much going on to prepare and plan for the tournament to be a success, it’ll be a truncated live draw, but no less essential to keep a tab on all the news heading into the tournament. The draw will take place on the 15th of January at 7.30pm GMT. Links will be shared through the Facebook in the build up!

There’s going to be three groups of five teams in each, totaling 15 teams overall. Now, let’s have a look at the pots for the draw! One team from pots 1-3 will be in each group, and two teams from pot 4 will make up our five teams.

Pot one features some familiar names to the FNY event. The Aberdeen Oilcats, Glasgow Hornets and Grangemouth Broncos have all been ever-present at FNY. The Broncos were the overall winners of the inaugural event, while the Hornets and Oilcats rounded out 2nd and 3rd respectively. Since then, they’ve had varying levels of success. The Hornets managed to finish as the top UK team last season, after a disappointing FNY 2. The Broncos have been involved in some classic encounters, and some of our favourite games at the tournament – they finished one place behind the Hornets last season, and will look to improve on this this coming season! Aberdeen are coming off another strong BAFA season, and will look to make a strong start to their 2019 calendar year at Flagging New Year!

Pot Two features more familiar teams, as the Edinburgh Outlaws, Clyde Comets and Carnegie Flag Football make it 6/6 for HNC Premier Division teams attending! All three teams have prior tournament experience at FNY and beyond. Carnegie, along with an Outlaw, put in an impressive shift at King Bowl, while both Edinburgh and Carnegie have plenty of time at Big Bowl under their belt. The Comets survived in a heated HNC Premier Division last year with an impressive late rally, and will want to have their 2019 preparations off to the best possible start at Flagging New Year!

We venture south now, as three English sides will brave the Scottish winter in search of glory! The Leeds Samurai are another team who are no strangers to cross-border battles, as they have taken part in prior FNY and Flagging Iron Man tournaments. The Victoria Park Panthers hail from the toughest division in the BAFA leagues, and proved their mettle with a 3rd placed finish at FNY2. They’ll want to improve on that against this field of competition. The Coventry Cougars are tournament veterans, playing at FNY, Big Bowl and many, many more – their #1 weapon though is surprise! They manage to attract some of the UK’s top talent for these invitational tournaments, and couple this well with their blazing speed and fundamentals.

Let’s get continental! Despite the move outdoors, an incredible six teams from six different nations will set their sights on Scotland in just a few short weeks! Starting with the team who may be most comfortable in their surroundings, the Craigavon Cowboys hail from the Emerald Bowl competition, and will make the short trip over the sea for their second FNY experience. After an impressive showing in a tough group last season, they’ll be looking to make an impression on the competition…and the pubs! The Vienna Spartans were arguably the talk of the town after last year – coming in as a relative unknown, the Austrian side won us all over with their exciting brand of football as they seized the #4 place overall. The Purmerend Barbarians came second in the Dutch leagues last season, and have come a long way in such a short space of time. They figure to be a much hardier proposition this year! The final returning international squad are the Reckless Russians. With flag football going from strength to strength in Russia, this assembly of talent from the Russian leagues will be a tough nut for any team to crack!

Our two debuting international teams come from nations who’ve yet to make their curtain call at Flagging New Year. Starting with the Swiss side, the Balerna Beasts. Excitingly, they’ve yet to make their tournament debut, and will be an unknown quantity. With the Swiss leagues having solid results at several international tournaments, including Champions Bowl and Big Bowl, we expect they’ll have the quality to compete strongly in their first taste of competitive action! Finally, from Slovenia, the LAZAR Wild Hogs Kocevje become the first team from the SFFL to play at Flagging New Year. They’re venturing into hosting their own tournament this year, so they’ll want to show everyone how strong the Slovenian league is.

So there you have it! Tune in this Tuesday for the live draw. We can’t wait to see you all there!