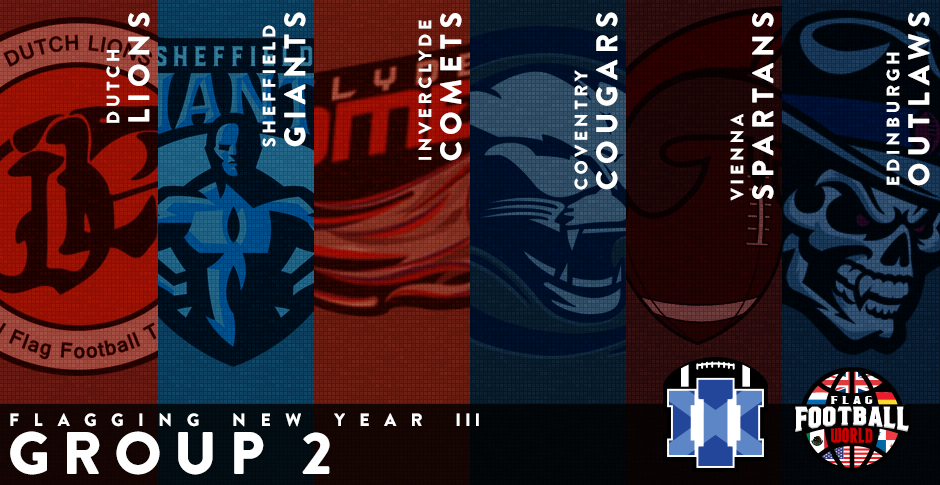 We’ve got some mouth-watering matchups in group 2. We preview and predict how the group will go down today!

The Dutch Lions return to Flagging New Year for their second bite at the cherry. They fell to the eventual champs, the Buttonhookers, in the quarter-finals (losing by a solitary point), but they put in an awesome performance in their first tournament on UK soil. They’re comprised almost exclusively of Hague Hyenas, who are the reigning Dutch national champs. They score fast and often, so you’ll be sure to witness an aerial assault.

Cliff Dankers is the stoic, patient man under centre for the high-powered Dutch offence, and he will look to utilise the speed he has from his receivers. They’ll be down a number of key contributors, but this squad has strength in depth, and they’re early favourites for the crown. After podium finishes at Kings Bowl and Pink Bowl, they’ll have their sights firmly set on a higher placing at FNY this year.

The Sheffield Giants enter their first FNY, but they’re one of the most established and successful teams from the BAFA leagues. Finishing 3rd in the UK last year, the Giants will look to make a positive impression in their FNY bow. Their lineup is loaded with stars, including the MEC QBOTY Dean Whittingslow, MEC OPOTY Josh Allen and the MEC DPOTY Mike Webster.

Outside of the big stat-getters, you’ve got Tim Darracott at receiver, who is one of the more imposing receivers in the nation, while Max Verlint will relish a chance to go up against Cliff Dankers of the Dutch Lions, as the safety hails from the Netherlands himself. With so much talent, they’ll be sure to be challenging for a podium place. They’ll be visited by the Ghosts of BAFA Playoffs past, as they meet in the group stages the two teams they defeated in the Northern section last year – the Comets and Outlaws

The Comets will be taking part in their second FNY after a huge year in 2017. After an up-and-down season, they surprised a number of observers (not us though!) by making the playoffs, and in turn the Premier Division, at the first time of asking. Not only did they make the post-season, but they won their first game against the veteran Sheffield Vipers side. They’ll be relishing a rematch against the Sheffield Giants, who ousted them from last year’s Northern Playoffs.

The Comets have GB Lion Brian “Bud” McFerren leading the charge, but their season took a upswing after the arrival of David Pasnik from the Hornets. Both Bud and Pasnik were regulars for the 10-time British champion Kirkcaldy Bulls squad, so they know how to win at this level. Fabio Marturano and Chris Lang were both huge contributors for the Comets, while Steven Mercer provides some spark on defence with his effective pass coverage.

The Coventry Cougars will cross the border for their first FNY expedition, but don’t call these guys untested. The Cougars are one of the premier programs in the UK, with trophies at junior, youth and women’s level. Their men’s team have played together for years, including a number of trips abroad to Big Bowl. They’re a household name in the BAFA leagues, and are a welcome edition to the Flagging New Year lineup!

If there’s one thing this team have, it’s speed. Kieran Eaton and Luke Madden are both lightning quick, and have excellent fundamentals to boot. They can fly by almost any defenders and beat them for a score from anywhere on the field. James Ashmore is an exciting prospect at QB, and the Cougars will welcome a couple of ringers into their squad, including GB Silver and Birmingham Lion Paul Zinkus. They’ve got plenty of talent, and unquestionable chemistry, but can they push for second place? We’ll find out soon!

The Vienna Spartans entered the Austrian first division (FLA) after winning the second division, and were the surprise package of the league year. The merged with the Vienna Vikings, as they combined their winning momentum with the Vikings’ experience and ability. They had a strong start to the year, and at the midseason point sat at #2 in the league behind the Klosterneuburg Indians, but they finished 5th in the end. This is an incredible achievement, given they were in a league with the aforementioned Indians, the Graz Panthers and the Styrian Studs.

Teams will need to be wary of their big receiver, Constantin Battenfeld, who is a threat in the redzone, and provides an outlet for the Spartans offence. Look out for defensive star Armin Rehse, who led the Spartans in interceptions last season. They are an unknown threat to the other teams in this group, and could be the surprise package of the tournament.

Edinburgh come into Flagging New Year after a bit of a down year for them on the field. We had high hopes for the side coming into the season, but their roster went through major flux. The regulars in the lineup were very impressive however. When they get their strongest 5 on the field, they’re a very difficult outing for any opponent, and this was no more evident than in their narrow loss to the Glasgow Hornets last year, and their playoff loss to the Giants, where they were within touching distance at halftime, despite their lack of regular QB. David Hogg and Liam Clutterbuck deserve commendation for keeping the squad focused as they snatched a playoff spot.

On the field, Jamie Archibald is the defensive superstar for the Edinburgh outfit. After his call-up to the HNC Chieftains, Jamie had a banner year, with 12 picks and 2 returned for scores. He contributes on offence, but the main man on that side of the ball for the Outlaws is Alessandro Marrello. The soft-spoken receiver runs silky-smooth routes, and has excellent hands to keep his QB a safe outlet. If the Outlaws click, they might just avenge their playoff loss to the Giants, and push hard for a second place berth.

As soon as the Lions and Giants got drawn against one another, we saw an opportunity for an instant classic. The Giants pride themselves on their historically vaunted defence. The Dutch bring a high-scoring offence, so it’ll be an interesting clash of styles. We can’t wait to see Cliff Dankers duel Dean Whittingslow!

The Cougars are famed for their elusive running and inventive running game, but they might meet the fastest player on a flag field when they take on the Comets. Bud McFerren is hands down one of the hardest players to tackle in the UK, and his Comets team will hope to topple the Cougars to push for a higher placing in their group. Expect to see a lot of missing tackles when we see the Cougars take on the Comets!

The Outlaws could start their new season with a big win over international competition, but they’ll need to be wary of the Vienna Spartans. Both teams are experienced and talented, but Vienna perhaps over-performed in the FLA last season, unlike the Outlaws in their respective league. We’re excited to see who comes out on top between this battle of the capital cities!

Much like group 1, we see the top seed taking top spot, but second place looks more securely in the hands of the Giants for this group. They could be upset by the Cougars, who have a habit of punching above their weight at these types of tournaments, but the Giants should have enough to clinch a spot in the top bracket. The Comets could suffer a little from putting so much focus on their kitted ambitions lately, and we can see them finishing bottom if they don’t turn up at full strength. We’ve heard through the grapevine that the Outlaws have themselves a new QB, while the Spartans will be starting Julian Trubel at QB for this event. We can foresee the Outlaws and Spartans fighting for seeding in the middle bracket with the Cougars. If pushed, we feel the Cougars could pip the others to third place, while the Spartans seem strong enough to take fourth.