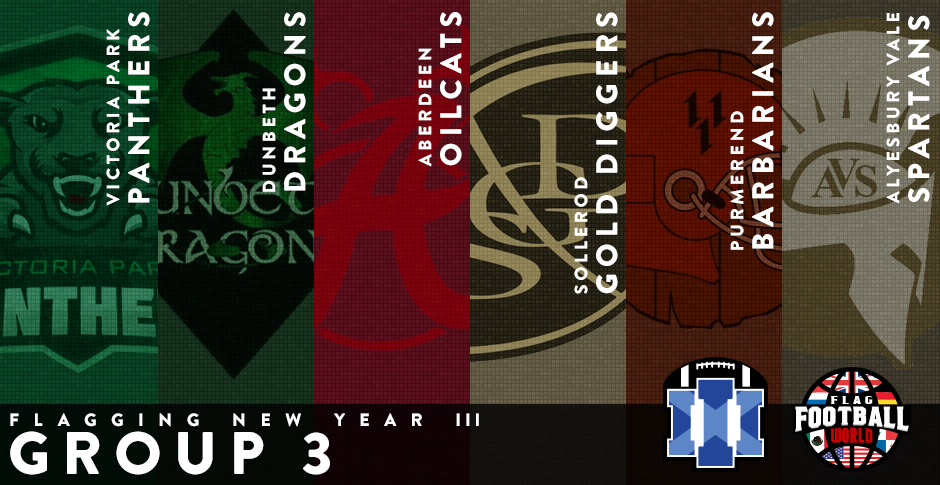 Group 3 is arguably the most competitive in the tournament, with a number of evenly matched teams. Today we break this group down!

Last year’s third place team had a lot to be proud of coming out of their first tournament north of the border. With a smaller squad than most, they performed well above expectations to take a podium place. If you’ve got any experience playing against the Panthers, its not hard to see why.

The Panthers are a group of friends who train, travel and play together, which is awesome to see. Their on-field and off-field chemistry is evident for all to see, as they continually punch above what many consider them capable of. They’ve got excellent fundamentals, and complete in international tournaments such as Big Bowl for further experience. In the league, they had a fourth place finish in 2016, but missed out on the playoffs after being in comfortably the hardest division in the BAFA leagues. The London Rebels and Buttonhookers finished above them, but after 10 wins and 4 losses, the Panthers showed that they’re arguably the third best team from the SEC.

Their offence is very efficient, as the excellent Peter Coppenhall leads a smart, methodical offence. His top targets are Charles “Hovis” Douglas and Matt Turner, who are physical receivers with very safe hands. Mark Streather is the standout on a very organised defence. They’ll look to get back on the podium again this year, but face a stiff challenge from within their own group…

The Dragons are very much like a northern version of the Panthers. They’re fundamentally sound, they’re a smaller squad and they always seem to play up to the competition in front of them. The Dragons have become one of the most consistent teams in the BAFA leagues, making the playoffs in consecutive years, despite how relatively new they are as a team. This will be their third FNY, after finishing in 8th last year – a placing higher than a number of other BAFA playoff representatives.

Their offence is a lot of fun to watch. QB Ally Aitken plays with a Favre-esque gunslinger attitude, which makes their games wildly entertaining. It helps that they’ve got a stud receiver in Craig Murray to highpoint the ball. Craig made his Chieftains bow last year at Big Bowl, and will no doubt use that experience to help his team here. The defence has two strong corners in Barry Conn and Brian Smith who will frustrate opposition QBs. The Dragons will relish the opportunity to test themselves against the teams in this group!

The Oilcats enter their third FNY after finishing third overall at the inaugural tournament! On their day, they’re one of the toughest teams in the UK, with a fantastic defence and offence, thanks in large part to HNC DPOTY and OPOTY, Gary Elliott. We understand though that they’ll be missing the GB Lions star, as well as their other GB Lion Calum Young, so they may look at this tournament as a development opportunity this year.

That being said, they still have excellent talent in their midst. Callum Stopani is an exciting player to watch, as his speed over a short distance means he can break on passes from opposition QBs to create turnovers. With the hyper-competitive Michael Scott leading the team, they’ll always feel like they can win any contest. The Oilcats will look to show that they can compete without their top players, and we’ll see how they fare at FNY3!

The Gold Diggers are the Champions Bowl holders and runners up in the Danish league. They’re entering their first UK tournament, and are the hot pre-tournament favourites! They’re among the most athletic teams in European football, and a number of their squad represent the European champion Danish national side. Star receiver Jonas Bo Hansen has already won a tournament on UK soil as part of the Mass Flag All-Stars, who took home the Jags 7s trophy (as well as a trip to Super Bowl 52). Formerly known as the Copenhagen Fusion, the Gold Diggers have a busy trophy cabinet, and will look to add the FNY trophy to their collection.

For most teams, missing a few players would be a death knell, especially if those players are starters. However, SGD have incredible strength in depth. There’s talk they may be down a couple of their regulars, but that doesn’t mean they won’t have an incredibly strong starting lineup regardless. Look for SGD to make an impression during their UK bow!

The Barbarians are another side who are entering their first UK tournament and will want to give a great impression of themselves. They have tournament experience at both Pink Bowl and Big Bowl, so they’ll be familiar with the format of FNY’s running clock!

The Purmerend side have an impressive set up, with a second flag side which competes in the Dutch league. Their first team finished just behind the Hague Hyenas in the race for their respective league title. Their biggest threat on offence is the impressive Daan Bording. On defence, they rely on the speed of their blitzer, Davy Kolhof. This increased pressure on QBs leads to errant passes, which the rest of the defence can take advantage of. As essentially the most unknown quantity in the group, we anticipate the Barbarians could surprise in this group!

Another debutant team are the Spartans! Coming off a banner 2017, the Spartans will want to continue that momentum into FNY, where they will feel good about their group. This team is led by the athletic Jeff Bond, who has home-run ability from anywhere on the field.

Jeff’s partner in crime is Dan Benning, who was our SEC OPOTY. Dan’s route running and tremendous hands make him a tough matchup for any defensive player he faces. On the other side of the ball, the Spartans look to Mike Austin for lockdown coverage. Mike has excelled on defence after making the transition from offence this past season. One drawback for the Spartans is if they end up putting Jeff under centre. While he’s a good signal-caller, this limits their offence to an extent. The Spartans have all the pieces to make a run at the top two places in this group!

We’re obviously excited about seeing the Gold Diggers in action against the teams in attendance this year. Seeing how the best from the BAFA leagues measure up against arguably the best team in Europe will be fascinating to watch.

The game that we’re actually most intrigued by in this group is the Panthers vs the Dragons. Both teams are of a similar mould, and rely heavily on their squad members to play both ways. With 12 minute halves, both teams can go all out to seize an important win.

Aberdeen’s potentially weakened side will make them vulnerable, so seeing if they can upset the Spartans and Barbarians will be something to keep an eye on. The Spartans themselves will look forward to the chance to take on international opposition in the Purmerend Barbarians, as they’ll lean on Jeff Bond‘s experience from his GB Lion days to give them an advantage in an interesting clash.

We’re picking the SGD to win this group. We just can’t look past their athleticism and pedigree, plus they’ll be motivated to win another trophy to add to their extensive collection. In second, we can see the Panthers having just too much for the other teams in the group to topple them. They’ve shown in the past that they can beat the Spartans, while an under-strength Oilcats and Barbarians side won’t be able to mount a serious challenge.

Their stiffest competition may come from the Dragons, provided they’re clicking. If they are, we can see them and the Spartans finishing in third and fourth respectively. With as little as we know about the Barbarians, we’re struggling to put them above the Dragons or Spartans.

However, as we’ve seen in the past at these international tournaments, the element of surprise can be a deadly weapon, so the Barbarians could take full advantage and put up a fight to advance to the middle bracket. We’re putting the weakened Oilcats last in the group, but we can’t shake the feeling that they’ll make us eat our words.