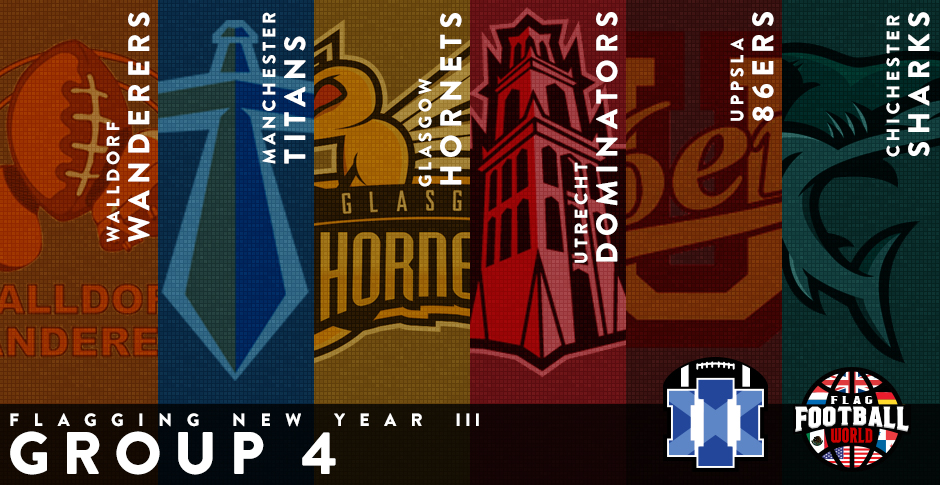 Our final group preview sees last year’s finalists looking to go one stop further, among a number of other stellar squads! Find how rounds out our tournament here!

Topping the billing for this group are the Walldorf Wanderers, led by the incumbent Benjamin Klever. As hosts of Big Bowl, this squad have all the tournament experience and tactical nous to repeat as finalists this year. They rounded off their year with a Pink Bowl trophy, so the Germans come in riding a wave of momentum.

Klever is arguably the best QB in Europe, as the former WR has special arm strength and understanding of the game. His favourite target is the impressive Fabian Achenbach, who has some of the best routes and hands in the continent. In something of a FNY tradition, the Wanderers have recruited the services of Kenny Bello. Mr. UK Dukes lit up the tournament last year, and figures to be even better this year without any nagging injuries. We understand the Walldorf outfit have added some defensive talent to their roster in an effort to win the tournament! The Wanderers could just do that this year!

From the MEC comes the Central division champs, the Manchester Titans. The Titans had an awesome 2017, making the playoffs in style and taking part in a number of invitational tournaments. They defeated their group rivals, the Glasgow Hornets, at Jags 7s, but we’re sure this will be a whole different set of circumstances. The Titans are taking part in their second FNY after impressing last season.

A big reason for the Titans’ ascendance is the play of GB Lion David McInally. David’s play at WR and Safety has propelled the Titans to new heights, and QB Alan Mead has thrived with the additional help. The MEC boasts a number of the most efficient QBs in the BAFA leagues, and Alan is up there with the best. The Titans will look to improve on their 15th place finish last year!

The de facto “home team” for the tournament come in to the season after a somewhat disappointing 2017. After finishing 2nd in the BAFA leagues in 2016, they looked to kick on in 2017. They came in at an underwhelming 7th at FNY2, and followed that up with a 4th place finish in the BAFA leagues. They’re still a force on their day though, and had the number one offence and defence in the regular season.

They’ve got a talented offence, with switchblade Nicholas Farrell able to run, catch and pass with great effect. GB Lion Julian Holburn-White is the resident match-up nightmare, and his development as a receiver has seen him take his game to new levels as he turned heads at last year’s Champions Bowl tournament. Last but not least is veteran Grant McLennan, the former Bull and Trojan. Grant’s got some of the best moves in the business, with or without the ball, and it’s not rare to see him leave defenders with broken ankles at the end of games. The Hornets have all the talent needed, but can they put it together to push for a place in the top bracket?

The Dominators are taking part in their 2nd FNY tournament after coming to the UK with a makeshift side. They still managed to finish 11th without a number of their top players, and should be looking to crack the top 10 this year.

Their defence is defence is well organised, thanks to the play of Ilja Tersteeg. Ilja has the knack for being around the ball for the whole game, and the Dominators will look for him to lead them. Jeroen Peeperkorn will marshal a much improved offence this time round for the Dominators, as they’ll feel better about their prospects with the additional talent in their roster. Can they push on? We’ll find out this week!

Uppsala 86ers are entering their first FNY in name only, as a number of their squad took part in last year’s tournament as the Swedish national teams (2 separate teams). Interestingly, they decided to split their talent pool across the squads, last year so we’ll be excited to see how they fare as one combined unit.

The Swedes are on cloud nine at the moment. They excelled at the most recent European Championship, including claiming an impressive scalp when they beat the much fancied GB Lions. Their two sides finished 6th and 10th respectively last year at FNY2. Can they do even better this year?

The SEC South champion Chichester Sharks make the long trip North for their first Flagging New Year, but they’ve got familiarity with the city! Their leader and quarterback, Neil Henderson is having a homecoming of sorts, as he’s one of the founders of the Glasgow Hornets. He’ll relish the chance to have another crack at his former club, and brings an impressive cast of players.

The Sharks have one of the most exciting young players in the country in their lineup, as GB Silver Lion Corey Bedford lights up the scoreboard on offence and defence. As if he wasn’t enough, the Sharks will be bringing a ringer in GB Lion Tim Thomas to play receiver. This gives Neil a plethora of targets to throw to as the Sharks will want to give a good account of themselves in a tough group.

We’re personally looking forward to the rematch of one of the most exciting games at last year’s tournament, as the Hornets and Wanderers face off again! Both teams avoided each other at Champions Bowl, but their bout at FNY was a treat for fans of offensive football. We can’t wait to see these teams duel again!

The Dominators are confident of their chances with a stronger squad, but their game vs the Uppsala 86ers could be pivotal in seeing who advances as second in the group. Both teams impressed last year, and we’re excited to see who comes out on top when these international squads do battle in Glasgow!

An all-BAFA matchup might not seem that exciting, but the Titans and Sharks will be an interesting clash of two teams on the rise. Both have young, exciting talents in their ranks and are led by savvy, veteran quarterbacks. These teams rarely meet, so its a fresh matchup to look forward to!

This is probably the tightest group overall, as there’s no massive drop off in talent between teams. We reckon with Kenny and some defensive help, the Wanderers will likely be too strong for the rest of their competition in this group, but they could be upset if Klever isn’t firing on all cylinders.

It feels like 5th and 6th in this group are being spoken about unfairly, but both teams have had a tough draw. We could quite easily see either team getting into the middle bracket, but we’ll give the Titans fifth, and the Sharks sixth. We just don’t know how many of the Sharks will travel, while the Titans are bound to bring another large squad. Either of those sides would be strong favourites in the bottom bracket though.