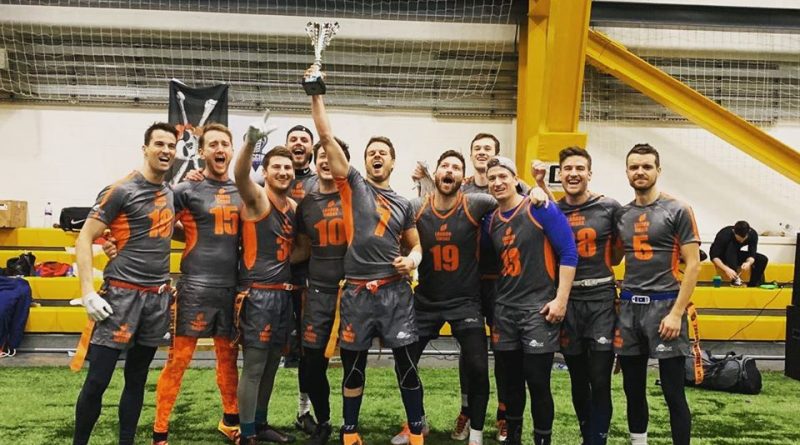 The most recent instalment of Flagging New Year is in the books and we have new champions in the Mixed bracket and Under 13s, and we crowned the first queens of the Women’s bracket! Here’s how all the action unfolded: 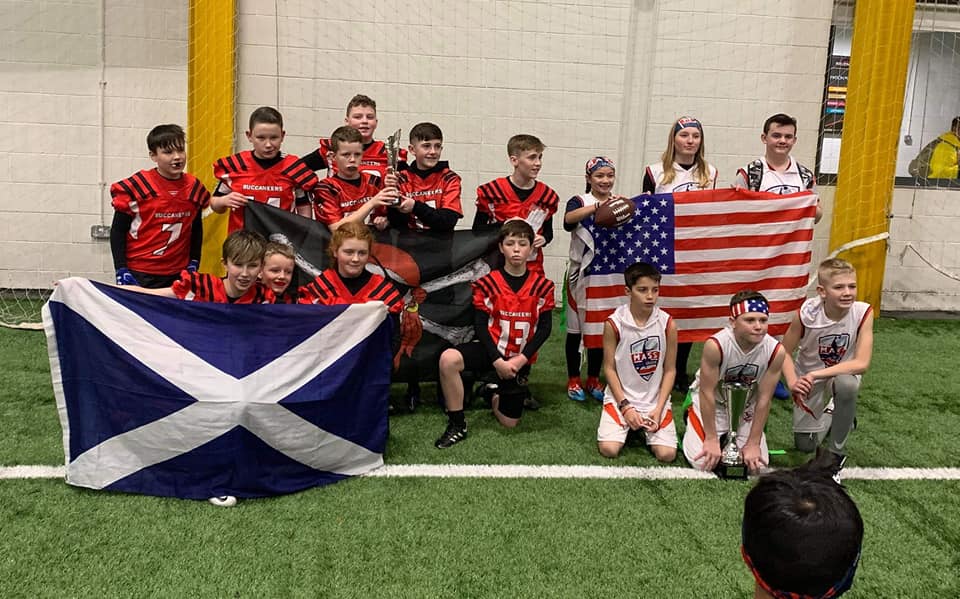 The early action saw plenty of eyes on the North Shore FFL side as onlookers were interested to see just how much of a gulf in class there would be between the US side and the British ones. The answer – very big. It was like a circus: crazy jukes, deep passes, one handed grabs and length-of-the-field touchdowns featured on near enough every drive as the US side dominated their way to the final.

That’s not to say they didn’t meet some resistance – they were slowed down considerably in a 27-6 win over the Hamilton Buccs, and conceded yet another score against the Nuneaton Jaguars, but they shook off any fatigue and dominated in the final against the Hamilton Buccaneers. The Buccaneers themselves had done brilliantly to get there – a 34-19 win over the impressive Nuneaton Jaguars earned them a spot in the final.

The final standings are as below: 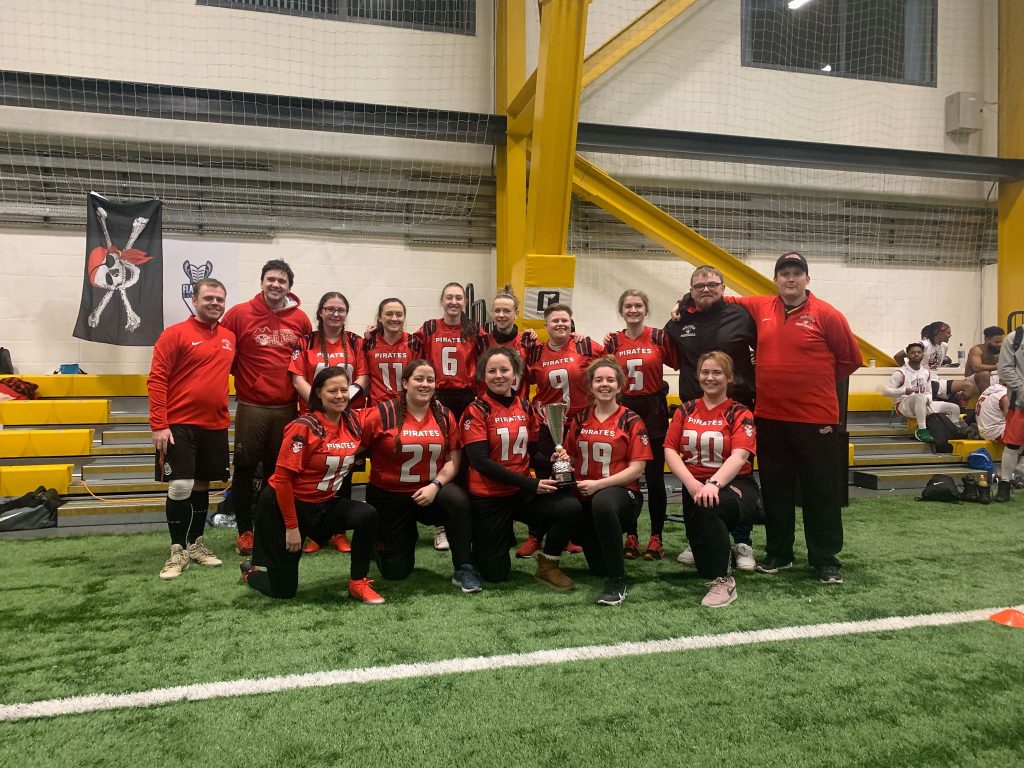 In the first women’s bracket of Flagging New Year, we saw six home-field teams compete for the inaugural trophy. The opening round of fixtures threw up a potential final preview, as the East Kilbride Pirates Women (EKPW) took on the Hyde Park Renegades (HPR). In a tense affair, the Pirates scored late twice in a 12-7 win, but there was a feeling of inevitability that they would meet in the final.

Elsewhere, the Grangemouth Fillies grabbed an impressive win over the Manchester Titans, who may have overlooked the fledgling side who were enjoying their first competitive action. The Titans refocused for the Sunday round of action and secured 3rd overall at the tournament. They pipped the Leeds Samurai to the final podium place. The Fillies ended the tournament with one win and two ties (one incredible 0-0 against HPR), but came 6th overall after losing out to the Hallam Warriors, who relied on Steph Tharme for some much needed offence.

In the final game, HPR struggled to get any traction against the Pirates. EKPW put up an early TD and XP to grab themselves a 7-0 lead. Poor tackling allowed the Renegades a route back into the game on a length-of-the-field score, but the XP was no good. That was really all the offence of note, as the Pirates defence held firm and, after a few shaky dropped interceptions, ran the clock down to secure the 7-6 win and their first ever piece of silverware!

The final standings are below:

The mixed bracket had some real surprises in the group stages, while others followed predictions with minimal fuss.

In group A, the Hornets had the initiative early as a win over the Giants, coupled with the 86ers and Dutch Lions tying, had them looking at the top spot. Their performances were poor however, and they were caught out by the 86ers, who looked dangerous despite a number of injuries throughout the day. The Hornets found themselves behind at halftime against Craigavon, and needed a real turn of good fortune to get past the Chichester Sharks, who were the real surprise of the tournament.

The Dutch Lions proved to be one of the bigger disappointments, but had a chance going into Sunday if they could overcome the Hornets, but the strongest defensive performance of the weekend gave the Glasgow side top spot in the group, despite the stumbles. The Sharks stunned everyone, winning 20-18 against the 86ers to join the Hornets in the quarter finals!

Group B came down to a thrilling game between the Vienna Spartans and Aberdeen Oilcats, which came down to inches! The Oilcats were down late, needing a 2XP to tie the game up. After their TD march with time expiring, their XP attempt was deemed to be caught short of the goal-line! It was a remarkable contest, and meant that the Spartans went through as group winners, while the Oilcats would be rematched with the Glasgow Hornets in a repeat of last year’s final.

The Cougarhawks became everyone’s second team over the weekend; if you’re reading this, there’s a good chance you played for them too at some point! The talent they had on the field didn’t translate to wins however, as they struggled against the much more drilled Dominators and Clyde Comets. They did however pick up a win over the Leeds Samurai, who were disappointing after their 7th overall placing last year.

Group C was a straight dogfight between the Killer Bees and Grangemouth Broncos. The match-up between these two sides was a fiery one, with plenty of physical play. The Broncos defence held strong in a 20-12 win, as they secured top spot in the group. The Victoria Park Panthers (VPP) had several talented players, including Tariq Dag Khan at QB, and Vince Machi doing his best at receiver. They didn’t have enough chemistry to crack the top two however. Purmerend followed VPP, with Coventry beating the Outlaws to avoid the bottom spot in the group.

In the final group, two favourites for the tournament crown would lock horns in an epic match. Mass Flag picked up a controversial win (5th down?) in the group stages, meaning the London Smoke would have to settle for second.

The Russians were entertaining as always, as Lev Petukhov led his side to some impressive wins over the weekend. They couldn’t overcome Carnegie, who took third in the group. The Manchester Titans struggled on Saturday without Alan Mead, but business picked up on Sunday as their signalcaller returned to action. The Raptors came close to overcoming Carnegie, but couldn’t get the game-winning score.

In the quarter-finals, the Hornets barely overcame the Aberdeen Oilcats in a 21-12 nail-biter. The Spartans handled the Sharks comfortably 27-12. Mass Flag almost had a scare, as they barely overcame the Killer Bees, 21-18. The Broncos struggled to crack the London Smoke, as their offence sputtered against the tournament veterans, 20-0.

In the semi-finals, the London Smoke built an early lead against the Hornets which they did not relinquish. They managed to get some much needed rotation in the second half of a 27-14 win. Mass Flag were again caught playing with fire in a one score win over the Spartans. And with that, we had our final!

The teams traded scores early, but Mass Flag would be frustrated throughout the game by Charlie Williams’ command of the clock, leaving the US side little time to respond at the end of the first. In the second half, the Smoke were 7 down inside three minutes, but they scored on an impressive long effort to bring it back within one point. In a stunning move, the Smoke opted to go for two and the lead. Their gamble paid off, as Charlie found his brother Henry in the back of the endzone for a crucial 2XP conversion! Mass Flag didn’t have enough time to put a drive together, and we have a HUGE upset win and new champions!

Massive congratulations to the North Shore FFL U13s, the EKPW and London Smoke on their sensational wins! Thanks to all the teams and members of the organising committee for their efforts in making this year the best Flagging New Year ever!

We’ll see you all next year!

The final standings are below: