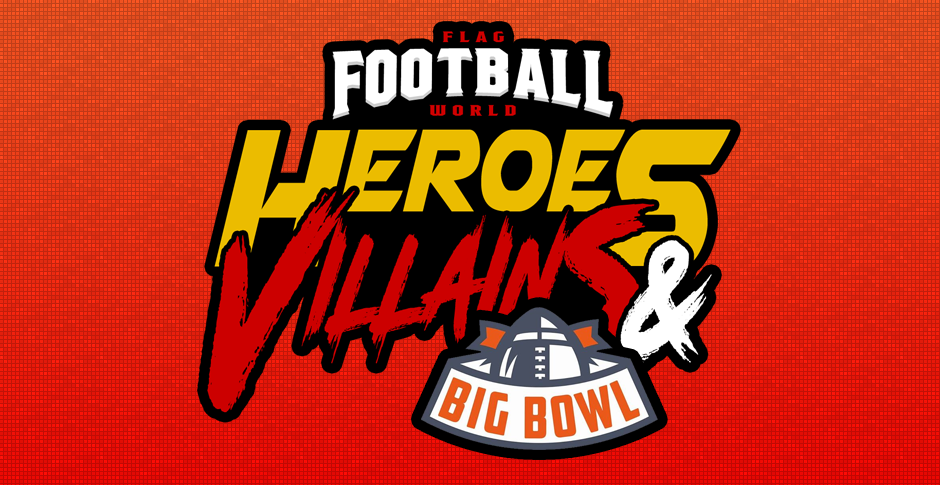 Big Bowl XI is in the books, and after another hugely successful tournament, we reflect and name some Heroes and Villains!

Not enough praise can be heaped upon the Wanderers for their efforts this year. Benjamin Klever and co. provided the flag football community with another tremendous tournament. The organisation at the event was fantastic as always, and the quality of teams who were attracted was as high as ever. They dealt with any speedbumps with minimal fuss and should be commended for their achievement. For those not at the tournament, the information provided on the ticker feed was greatly appreciated and kept everyone in the loop. We can’t wait for Big Bowl XII!

The Massflag All-Stars and Austria Amazones repeated as champions of their respective brackets and provided everyone with some excellent showcases of their abilities. Massflag seemed to get better as the days progressed, and their resounding victory over the Copenhagen Barbarians was a testament to their dominance this year. They unsurprisingly went undefeated, despite needing to integrate a number of new players which were not in attendance for last year’s triumph.

Meanwhile, the Austrian women flexed their muscles in a shut out final victory against Team Mexico, 19-0. Unlike Massflag, the Amazones did face a measure of adversity, as they suffered a shock loss in the group stages to the Copenhagen Tomahawks. They rallied admirably and ran the table, including a thrilling semi-final victory against the Boston Patriots, 19-18.

We mentioned the Wanderers dealing with minor issues at the tournament, and by that we meant the number of late withdrawals which unsurprisingly occur. One replacement team drawn in was the Copenhagen Barbarians. As one of the strongest teams out of Denmark, we were intrigued to see how they would perform with the somewhat limited preparation. What we witnessed was a near-miracle, as the “replacements” went on an incredible run to make the final. The magic ran out, as they fell to the Massflag All-Stars, but the Barbarians should be saluted for their awesome performance this year.

While the London Barbarians and London Ex-Pads both finished above the Bulls in the standings, we feel the 8th place finish for the legendary Bulls should receive special mention, as this was their best finish at the tournament. The Bulls managed to finish above a number of BAFA league representatives after topping a competitive group which saw them end up victorious over the aforementioned Barbarians side. We’re not sure how many Big Bowls the Bulls have left, but they continue to compete at the highest level.

We hate to do this, but the Dominators late call-off unfortunately meant some squads had less games to play, and is undoubtedly a villainous act. Granted, the Dominators have been busy this year, they attended Flagging New Year and hosted their own tournament at King Bowl. A number of their players also attended regardless, suiting up for the Chieftains and East Kilbride Pirates. At least we had notice of their withdrawal, unlike…

We’re still not sure what’s going on here. We raised eyebrows when we realised that the Hereford Stampede, who were all booked up for Big Bowl but also had SWC league fixtures on the same weekend. We even spoke to the Stampede, who seemed to be excited about their trip to the mecca of flag football in Europe. Imagine our surprise when we heard that, not only had they not shown up, but they’d not even told the organisers about their non-attendance. There was a genuine moment of worry as well, as anything could have happened to the Hereford outfit as they made their travels. Alas, this was just a case of the Stampede failing to show up.

We’ve reached out to the team for further comment or explanation which might shed more light on the situation, but we’ve been unsuccessful. If there was no genuine attempt made to get to the tournament, or no communication to suggest to the Wanderers that they’d have to pull out, then we can’t hide our disappointment. Teams sit on waiting lists for Big Bowl for months, just waiting to be called up. Failing to turn up also means other squads who made the trip are left with less games to play. It’s an all round bad situation, and the Stampede find themselves as villains this week.

Despite the beautiful weather, there was the odd bout of wind to contest with at Big Bowl. Call it lackadaisical or overconfidence, but some teams seemed to forget about securing their shade to the ground, leading to wild garden fixtures invading the field of play! Moral of the story; never trust the sun.

Can’t we all just get along? Even though the majority of the weekend was a love-in for the sport we all follow, it wasn’t without incident. Two of which caught our eye…

During the heated NP Flag vs London Barbarians quarter-final fixture, a fracas broke out. This seemed to centre around the nature of the American side’s play. NP bring a level of ruthless physicality to the game that many European sides are not accustomed to seeing. At times, it oversteps the boundaries of what is acceptable, but their talent is undeniable. NP Flag have priors at Big Bowl, as their testy contest against the Scottish Chieftains last year led to an ejection and a number of collisions.

Elsewhere, there was major confusion surrounding the actual winners of the Womens bracket semi-final contest between Germany’s T2D2 and Team Mexico. Early reports of the scoreline indicated that T2D2 had ousted last year’s silver-medallists by a single point. Team Mexico argued, extensively, that they had actually won the game by one point. After much deliberation, it seemed as if T2D2 gave up the ghost, and controversially allowed Team Mexico to play in the final. They forfeited their podium place, leaving us with an awkward image of two sides receiving their trophies, instead of the usual three.

Did we miss anyone? Let us know!