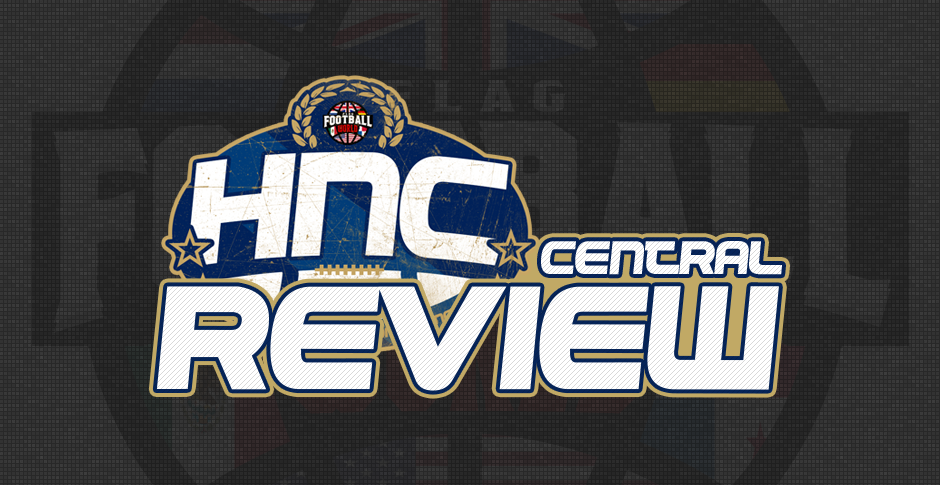 The Broncos and Steelers travelled to Airdrie to face the Dunbeth Dragons featuring some new but familiar faces in their season openers. The new season was welcomed with open arms, but more importantly, the league welcomed back Neil Roy-Warren after winning his battle with cancer. Neil will be suiting up for the Dragons this year, and we’re delighted that he’s back. Here’s how the games panned out;

The Broncos got off to a tremendous start in this game, as they scored two TDs on their first four offensive plays. QB Scott McKenzie found GB Lions Liam Fleming and Kevin Woods for the early scores. Fraser Thomson scored on a TD run, and the Broncos added two further scores before half time to give themselves a 35-0 lead at the half. With the game in the bag, the Broncos coasted in the second half, however the Dragons did manage to add a score through an Alistair Aitken pass to former Charger Robbie Menzies to put the only blemish on an otherwise flawless performance from the Grangemouth side. Scott McKenzie’s 6 TD passes and 6 XPs earned him our game ball for this game.

Grangemouth continued their fine offensive form in the second game, as they managed to score on every drive against the Steelers from Carnegie. The impressive Broncos defence snagged four interceptions, thanks in large part to the quick blitz of Matthew Ross. While Fraser Thomson and Kevin Woods managed to get a defensive score each, it is Liam Fleming who gets our game ball from this game. Liam finished with 3 receiving TDs to go along with his 2 interceptions. Again the Broncos could not stop their opposition from scoring, as QB Fraser Reid found the young and talented Brandon Lamb for a consolation score, while Greig Reid recorded an interception for the Carnegie side.

In another playoff dog fight the Dragons and Steelers had an all-or-nothing showdown in the final game-day of last season, where the Dragons secured a surprisingly comfortable win. This game was perhaps the tight affair we expected last year, as the two sides traded scores and turnovers. Alistair Aitken found success through the air, especially to star WR Craig Murray, who grabbed 4 TD receptions. The Steelers QB Fraser Reid replied with scores to Brandon Lamb, Peter Allison and Chan Phung. Before Chan’s score however, it was an emotionally charged TD from the returning Neil Roy-Warren which clinched the game for the Dunbeth side. Murray added a TD late in the game to make the score seem more decisive. This is another game where we cannot wait for the replay! The game ball goes to the dominating Craig Murray.