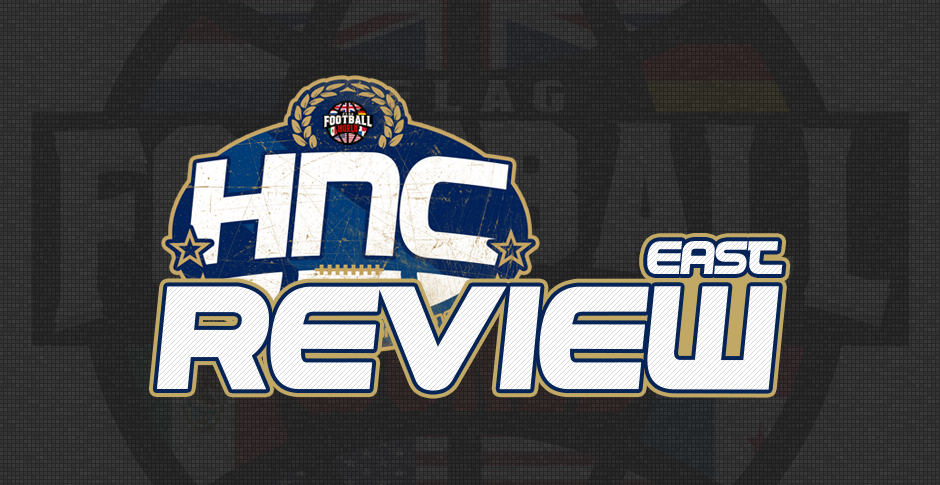 The HNC East division is arguably the most interesting in the Higher National Conference. The Sabers will be looking to topple their cross-city rivals, the Edinburgh Outlaws, and make the playoffs in only their second season. Both will look to chip away at the Aberdeen Oilcats as well, as they look to derail the Aberdeen team’s championship bid. Aberdeen hosted the first game day, and we spoke to Scott Forbes about how the action played out;

In the season opener, both sides appeared to be a tad rusty. TD’s were traded in what was a fairly even first half. Into the second half however and the Oilcats defence got themselves sorted out, playing more like the well drilled unit we’ve come to expect. Interceptions from Gary Elliott and Scott Forbes stopped the Outlaws’ flow and allowed the Oilcats to take advantage, spreading the scoring around a variety of receivers. With no less than 10 rookies suiting up the Oilcats rotated constantly, looking to balance youth with experience. It must be said that the Outlaws were missing a few players due to kitted commitments, but still put in a strong effort against the division favourites.

Oilcats QB Scott Stopani threw for 5 TD’s. He’ll be hoping to challenge for top QB come the end of the season. With 2 TD’s, Gus Ballantine played valiantly in a losing effort. Game ball for this game however, goes to Oilcats receiver Ross Cheyne who was a consistent pair of hands, making key catches throughout, including one for a TD.

Fun fact: this was the first regular season game the club have ever played indoors. Being Aberdeen however the weather is never predictable and it was a gorgeous day outside. Oh well, at least we avoided the sunburn.

Following an 0-13 debut season, the Sabers will be hoping get their first victory this campaign. Clearly they’ve been working hard over winter, as from the get-go they showed clear signs of improvement, particularly on defence. Craig Johnstone showed a lot of grit and determination trying to disrupt the Oilcats’ offence, and although he may not have recorded any stats, his contribution to the Sabers’ defence didn’t go unnoticed. Despite the improvement shown, the Oilcats were too strong for the young team. With skill and experience allover the field, as well as a talented crop of rookies, the home side, despite not playing at their best, took their chances when it mattered. Ross Cheyne, Jamie Bennett and Michael Scott all put in great showings on offence, and new defensive captain Calum Young also made some big plays on the opposite side of the ball.

There was no doubting who the MVP of this game was however. With a passing TD, 2 receiving TD’s, a receiving XP and 3 interceptions, Oilcats star Gary Elliott dominated this game, showing exactly why he’s a player to be feared wherever he is on the field.

With both sides having lost to the Oilcats, the Sabers and Outlaws were keen to ensure they didn’t leave the Granite city empty handed. The first half was a tense affair with both teams struggling to get anything going on offence. A 7-0 lead for the Outlaws at halftime was perhaps closer than any of the neutrals may have predicted. As the second half got underway, the Outlaws, under the leadership of (QB for the day) Liam Clutterbuck, used their experience and started to find some much needed form. A TD from Jared Armour to Patrick McKernan gave the Midlothian side a shred of hope, but when rookie Outlaw defender Casper Volker picked the ball off and returned it the length of the field for a TD, that killed the game and secured the victory for the side from the capital.There were some really good performances from the game. Paul Fleming scored 2 TD’s, David Hogg grabbed himself an interception and Liam Clutterbuck threw for 3 TD’s and all 3 XP’s.

MVP for this contest went to Outlaws receiver Gus Ballantine. He managed to chip in to the scoring with 3 XP’s; but it was his consistency and play making ability throughout the game in helping the Outlaws drive down the field that really made the difference.