Three HNC representatives from last year’s Northern playoffs took to Oriam sports facility in Edinburgh to play out their second set of fixtures in the BAFA league calendar. Due to the unfortunate departure of the West Lothian Chargers, this was a truncated game day for most, but the action was still intriguing nonetheless! Here’s how it all unfolded, starting with an excellent game between the Edinburgh Outlaws and Dunbeth Dragons…

The Dragons played the hosts in the first action of the day with a fairly depleted squad. Stud WR Craig Murray would be missing from the Dunbeth squad. This took its toll on the Dragons as they found themselves down 12-0 early. David Hogg did all the early damage with a TD reception and interception to give the Outlaws the upper hand. In the second half though, the Dragons came alive. Lead by Ally Aitken, the Dragons rallied from behind to tie the game. The teams traded scores until the final two minutes where the Dragons found themselves with an opportunity to take the lead with an XP conversion. The Dragons receiver was unable to haul the pass in, and the Outlaws took the ball with a chance to grab the win. They drove inside the five yard line and had four downs to punch the ball in. However on three occasions, Dragons defenders got their hands between the receiver and the ball and would break up the pass. Both teams will be disappointed with the final score, but this was an excellent contest for the neutrals. Our game ball goes to the QBs in this contest. Liam Clutterbuck finds himself under centre when required, and he put in an impressive 4 TD performance against a stout defence, while Ally Aitken dug his team out of a hole, and had it not been for an unfortunate drop, he would have lead his team to a seemingly unlikely victory. 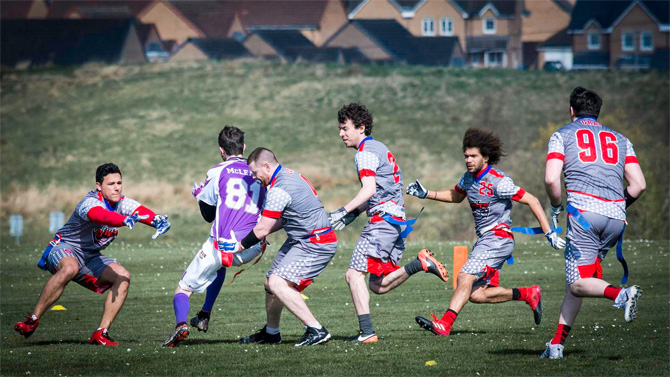 This contest, between two playoff chasing rivals, always promised to be a tight contest. The Sabres will feel like this was an opportunity squandered however as they had chances to win this game. They arguably had the better drives on offence but could not capitalise in the opponent’s half. The Comets on the other hand, had a number of dropped interceptions which could have made this game look a lot more lop sided, however their defence remained impressively strong after looking out of sorts against the Glasgow Hornets in the previous game. The Comets managed to finally intercept Jared Armour on an XP attempt, which Chris Lang snagged to give the Comets the slender victory. Our game ball goes to Chris Lang for his excellent performance on defence.

In perhaps the most surprising score-line of the day, we saw the hosting Outlaws stifle the Hornets very effectively in the early exchanges of this contest. The Outlaws took the impetus, exploiting broken coverage in the Hornet’s defence to take the lead. The Hornets welcomed back Alan Young to the lineup and looked to be back in business as they picked up a quick first down. However, a sack on third down effectively ended the drive for the Hornets. The ball was returned to the Hornets and they managed to tie the game after a long bomb to Julian Holburn-White. The Outlaws struck back quickly however through Angus Ballantine, who took advantage of further Hornet miscommunication and then added a valuable XP through Alessandro Marello. The Hornets took their last drive of the half into the endzone, as Richie Moore chipped into the Outlaw lead. The score at the half was 13-12 to the Outlaws, in a score-line that would raise eyebrows around the league. The Hornets struggled to find any cohesion on offence or defence, and the Outlaws looked good value for their lead.

The Hornets clicked into gear in the second half however; they scored three quick TDs on three possessions and suddenly took a commanding 31-13 lead with little time left. Nicky Farrell also helped himself to an interception which seemingly ended the game for the Hornets. With some rotation in their lineups, the Hornets allowed two very quick scores to the Outlaws. The Outlaws found themselves with the ball with 11 seconds left and needing a TD to pull off an unlikely victory. Nicky Farrell popped up again to seal the game for the Hornets with a leaping interception (video above). This was a tough test for the Hornets, and not one that they necessarily passed with flying colours. The control which David Hogg displayed under centre gives him our game ball.

The Comets helped themselves to an impressive scalp as they took down the Dragons with a fair amount of comfort. A Chris Lang pick six meant the teams were locked in a 19-19 tie at half time. The Comets defence stiffened in the second half and in total helped themselves to four interceptions, as the Dragons struggled to move the ball. The ever-dangerous Bud McFerren helped himself to two TDs and two interceptions of his own, in a performance which earns our game ball. The efforts of Brian Smith on defence for the Dragons should also be commended, as he grabbed two interceptions in the first half to keep the Dragons in the game.

After a tough loss, the Dragons failed to pick themselves up for a contest with the Hornets. The Hornets blew away any cobwebs exhibited in the Outlaws game by throwing the ball downfield on the Dragons early and often. Julian Holburn-White caught four TD passes, while the Hornets defence picked up five interceptions as the Dragons rotated QBs. Our game ball goes to Alan Young, who finished the game with 9 TD, while throwing no interceptions and was not sacked.

Visit HERE to see how the HNC looks after the second set of games.