It was an early wake up call for Aberdeen as they travelled down to Grangemouth to play the home side in the day’s first match-up. The away side still looked a little tired in the first half, making some uncharacteristic mistakes.  The Broncos took advantage and raced to a commanding 28-13 halftime lead.  The expression ‘a game of two halves’ comes to mind as the Oilcats came back strong in the second half.  The comeback was clearly panicking the home side as they looked a little flustered.  Errors crept into the usually solid Bronco’s defence; but they were able to do just about enough to hold off the charging Oilcats.

Broncos receiver Callum Woods had himself an excellent game hauling in 4 TD’s and an XP earning the MVP crown for this heavyweight match-up. Much credit should also go out to Scott ‘Scooter’ McKenzie throwing 5 TD’s and completing all 5 XP’s.

Both teams showed their class and will justifiably believe they have a shot at going all the way to the Britbowl title.

In the early exchanges both teams looked fairly evenly matched. A couple of key players started off well.  Spartan Calum Dillon returned an interception for a TD and Steelers Peter Allison beat 3 tacklers to run in a TD.  What happened after that TD however is what this game will be remembered for.  As Allison got into the endzone Calum Dillon pulled at his shorts aggressively.  Allison then reacted by throwing the ball at Dillon.  There was a little pushing before the pair were quickly separated.  This led to both players being ejected from the contest.  That ejection certainly appeared to affect the Spartans more as the Steelers began to pull away to what effectively become a comfortable victory.

With 8 TD’s and 7 XP’s, Steelers QB Fraser Reid was the MVP of this match-up, but credit should also go to Steelers receivers Chan Phung and Hannee Cheung, each of whom grabbed a brace of TD’s and an XP. 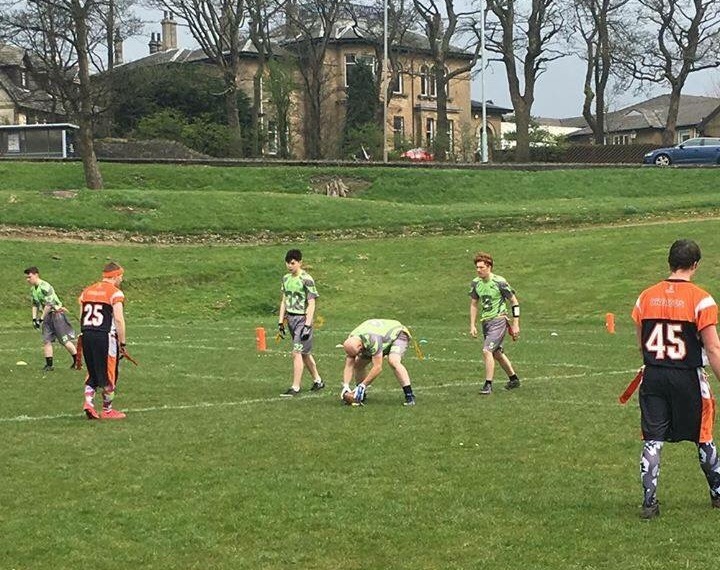 Aberdeen played the first half of this match the way they played in the second half against the Broncos – full of confidence and taking advantage of whatever the Spartan gave them. After 3 early TD’s from Scott Stopani to Gary Elliott it looked as though it was going to be a rout.  They also played some typically solid defence; apart from one lapse which allowed Calum Dillon (playing under appeal) to run the length of the field for a TD.  Into the second half and, uncharacteristically, a few mistakes were made which the Spartans were all too happy to take advantage of.  In particular a pick 6 from Stuart Graham, who also recorded a TFL.  The Spartans showed great spirit, which I’m sure their head coach will be proud of.  A number of Oilcats rookies were given their opportunity to shine in this game and all contributed well.  A special mention should go to Steven Smith who, in the absence of a couple of the usual starters, got his first starts and his first interception.

Picking an MVP for this game was tricky. Playing under appeal, Calum Dillon played very well, scoring 2 TD’s.  Gary Elliott also deserves a mention for a 6 TD game (3 receiving, 1 running and 2 passing).  Throwing 5 TD’s, Scott Stopani was also in the mix.  The MVP for this match however goes to Oilcats Head Coach Michael Scott.  He was a solid pair of hands, catching short and long passes and scoring 2 TD’s in the process.  This was on top of the unenviable task of organising the constant rotation of a large Oilcats squad on the sidelines.

The first game of the day for the Renegades saw them take on the Broncos. QB Stuart Harwood was back in action for the Renegades after missing week one. In what would only be explained as a one sided affair, the Broncos played extremely well, taking an early lead and never looking back. It could be argued that the 7 Renegades players who made the trip were saving themselves for a huge tie against their sister club, the Carnegie Steelers.

With six TD passes, Scott McKenzie takes our game ball for this tie.

The Carnegie Derby took centre stage for another year, as bragging rights and a step closer to the playoffs was the prize for the victor. Getting the nod at QB for the Renegades was Stuart Anderson. The Steelers took the early lead through Greg Reid giving them the 6-0 lead early and it wasn’t long before half time that the Renegades pulled one back with Stuart Harwood catching the TD to tie the game at 6-6 at the half.

In the second half and the Steelers got off the mark quickly with a TD to Chan Phung and adding the XP, giving them the 13-6 lead. The defence then took the lead for the Renegades with 3 interceptions in the second half the first coming from Dougie Scott, followed by Stuart Anderson. This helped close lead to 13-12 to the Steelers after missing the XP. It was the last 5 minutes that won the game for the Renegades. A sack to end one drive, and a TD on the ensuing offensive drive from John Guthrie gave the Renegades a 19-13 Lead with the XP being converted afterwards by Lewis Christie. A late stop for the Renegades could secure the game, but they got far more than that. Renegade Ross McLean came up with a huge pick 6, giving the Renegades the 25-13 Lead with around 3 minutes now left on the clock. The Steelers tacked on a late consolation score, but it was too late. For his late game heroics, Ross McLean earns our game ball.

The final game of the routine saw the Broncos continue their march towards the playoffs. An impressive point tally for the Broncos was put up, but the Spartans should be commended for their efforts. After throwing a number of interceptions in week one, they turned the ball over only once to the vaunted Broncos defence. They snagged three interceptions of their own, while managing to also get on the scoreboard.

Scott McKenzie had another great outing, with 7 TDs and 7 XPs thrown, as he spread the ball around to no less than 10 players for scores.

Visit our HNC hub to see how the tables look after game week two!