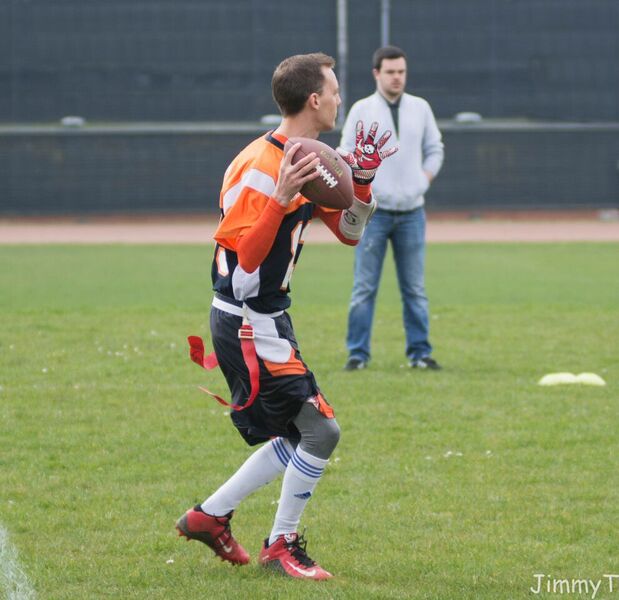 Scott McKenzie wins our HNC QB of the Year for 2017 with a narrow single point victory over his closest rival! Scott has been on top of the competition for most of the season, and thoroughly deserves his award. He does a fantastic job of using his weapons to his advantage, and keeps defences honest with his agility and elusiveness in the pocket. His best attribute is his accuracy on the move, as he has an ability to escape and find a receiver when the play seemed dead. For the Broncos, he does an exceptional job at avoiding negative plays, and is absolutely lethal on XP attempts.

We spoke to Scott’s teammate and coach Jimmy Thomson about his win!

Scott has been at the Broncos since way back in 2001, but over the past couple of years, starting at QB, the team are now aware of his talent. He is such an unassuming player, doing what is asked of him for the team, that it took the Broncos a while to realise his talent as a quarterback.

It is great to know that his abilities are being recognised in the wider Flag community.

Congratulations once again to Scott for winning the HNC QB of the Year!

Nicholas Farrell, or Nicky, impressively finishes up as #2 in our HNC top QBs after playing for much of the season as Alan Young. The Hornets feature a high-powered offence and pedal-to-the-metal attitude, which has lead to both Alan and Nicky finding themselves in the top 6 QBs. Nicky is a jack-of-all-trades for the Hornets, lining up at receiver, safety and he is one of the best QBs in the conference when he’s under centre.

Scott Stopani finishes some way off at #3, however his season has been remarkable in its own way. Scott has the distinction of being a full time starting QB who did not throw a single interception all season. His TD total might not be lofty, but the Oilcats defence keeps scoring, so Scott doesn’t have to. With the absence of Callum Stopani for much of the year, Scott has had to utilise new receivers to tremendous effect as the Oilcats romped to the HNC East Crown.

Sneaking in at #4 is Ross Dawkins. Ross has blossomed as QB this year, having been thrust into the role throughout his time at Carnegie in emergency situations. He’s always had an excellent deep pass, but this year he coupled this with good decision making and play calling. He knows his teammates well, and this shows on the field as he gets the best out of them. While the Renegades narrowly missed out on the playoffs, Ross can be proud of his productive season.

Finishing just behind Ross is Alistair Aitken. Alistair is a favourite of FFW, as his gunslinger style makes Dragons games thoroughly entertaining. As evidenced by his stats, he finished 3rd in total TDs, but his high interception rate shows he’s not afraid of any defence. The Dragons secured their playoff spot for the second year in a row, in large part due to the explosive traits of the Dragons offence.