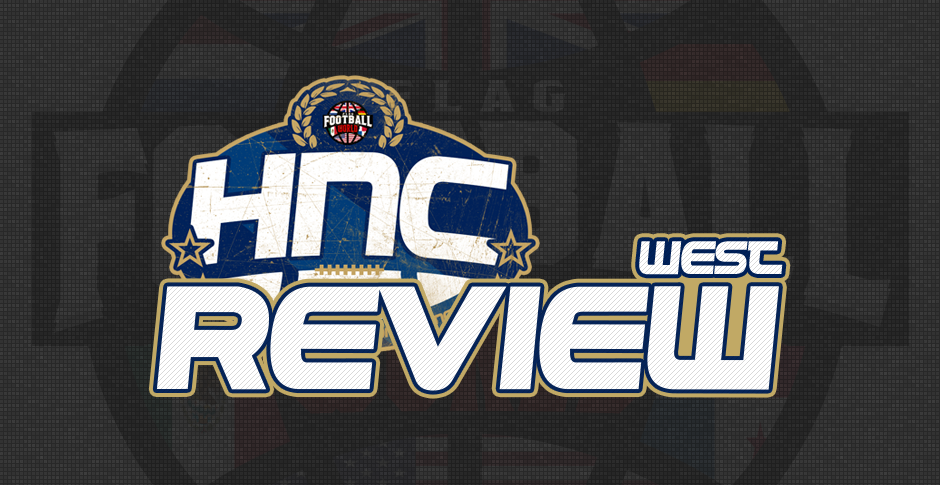 The HNC West kicked off the 2017 season with a full round of fixtures which took place a Duloch Leisure Centre in Fife on Saturday 8th of April. Here’s how the games unfolded…

The first game in the HNC West saw the play-off hopeful Renegades take on the debuting Paisley Spartans. The Renegades took control early as Ross Dawkins lead his offence up the field on the first drive of the game, with a TD pass to Stuart Anderson. The Renegades never looked back, and added a further 6 scores. Ross McLean grabbed the spotlight and scored 3 TDs, while the Spartans offence struggled with the blitz of young Rian Robertson. This was the perfect start for the Renegades, as they are chasing that elusive playoff spot that the Carnegie football program has yet to secure.

Saturday was a real trial by fire for the Paisley Spartans. They were drawn in a tough group against a Britbowl finalist, and the gulf in quality showed early in this game. The Spartans attempted to use their backfield trickery to confuse the Hornets defenders, however they were not fooled. A number of early interceptions for Hornet Cameron Shaw set the tone for the rest of the game. The game went as could be expected, however what should be commended is how the attitude of the Spartans never dipped. They continually searched for an elusive score, as opposed to attempting to keep the scoreline respectable. They were also unfortunate, as a number of Hornets interceptions came after tipped balls from Spartan receivers’ hands, feet, and in one instance, their head! A late flurry of scores for the Hornets meant they would hit the 100 point mark for the first time in their victory. It’s hard to pick one player of the game, as almost every active Hornet player managed to get on the scoresheet, however LB Cameron Shaw‘s early game heroics earned him the game ball. For the Spartans, Gavin Baker and Jon Keys snagged interceptions in this game.

The Hornets could not continue their fine form against a resolute Carnegie Renegades side. Carnegie came in to the game with a clear game plan to frustrate the Hornets and keep the scoring low, which they did to an extent. By snapping the ball with little play clock left, the Renegade gave the Hornets little time to capitalise on their drives. Who could blame the Renegades? They just witnessed the Hornets drop 100 on the Spartans, and they themselves suffered heavy defeats to the Hornets last year. With the Hornets misfiring early in the game, the scoreline was a surprising 19-6 at the half after the Renegades tacked on a late TD through a great grab from WR Stuart Anderson. Throughout the first half, they featured the speedy Rian Robertson as his blitzing frustrated the Hornets offence. The Renegades could not hold back the flood in the second half however. Hornets QB Nicholas Farrell started to use his dangerous running ability and opened up the Renegades defence. The Hornets tacked on four touchdowns in the second half to make the score more lop-sided. The game ball for this one went to Grant McLennan, who had three first half touchdown receptions. Elsewhere, Julian Holburn-White eased any nerves the Hornets had in the second half by taking a short pass and running through three Renegades defenders.

This game between two playoff hopefuls lived up to the expectations and was a fiery affair. The Renegades got off to a fast start with a short pass from Ross Dawkins to Stuart Anderson who took advantage of some poor Comets tackling to take the ball inside the five yard line. A short pass to Rian Robertson put the Renegades on the front foot early. The XP conversion failed, but the Renegades made an early statement. The Comets replied with an excellent TD grab by Ryan McCluskey, who caught the pass thrown by Martin McLintock in heavy traffic. With the XP try failing, the Renegades held a slender lead at the half. The Comets started with the ball in the second half, but found themselves behind after an excellent interception from Michael Haddow, his second of the game in his debut game & season. He took the interception to the house, and regained the lead for the Renegades also converting their XP attempt. The Comets replied through GB Lion Bud McFerren but again failed to add that valuable extra point. The Renegades would look to again use the speed of young Rian Robertson with a short pass which he took the distance. with another extra point point the Renegades went up by 8 with less than five minutes remaining, victory looking assured. However a beautiful pass from Martin McLintock to WR Chris Brown from his own five yard line on the very next play was a hammer-blow to the Renegades’ nerves. The Comets failed on their 2XP attempt, but managed to get the ball back inside the two minute warning. A bizarre play on fourth down ensued, as the Comets heaved the ball into the end-zone. Two Renegades safeties clashed, and Ryan McCluskey caught the ball while on his knees literally inches short of the end-zone. It was an exhilarating ending to an already entertaining game. We already can’t wait for the replay! The game ball goes to the debuting Michael Haddow, who made two athletic interceptions to give his team the upper hand.

The game between two debuting teams was perhaps a lot closer than some had anticipated. Conventional wisdom would suggest that the Comets would overcome the Spartans with relative ease, as they have a number of players who have BAFA league experience, compared to the Spartans having next to none. However the Spartans showed that their heavy defeats earlier in the day would not dampen their spirit. This game was 0-0 at the half. The Comets finally found success however as they broke Paisley hearts. An incredible run from Bud McFerren, where he broke several ankles, gave the Comets a deserved lead. The Spartans had previously demonstrated some effective tackling, but their resolve was unfortunately broken. Two TD passes from Martin McLintock to Bud gave the Comets an insurmountable lead. The Spartans added a score through QB Mark Pederby to the very impressive Jon Keys. Defensively, the Spartans snagged an interception through Roberto Cann, while the Comets added their own turnover through Steven Mercer.

In a hotly anticipated matchup, the Hornets showed their experience and class in the last game of the day. Another early interception for Cameron Shaw set the Hornets up with a short field, and they capitalised with a short TD pass to Callum Bell. The Hornets never looked back in this game, as their defence suffocated the Comets offence, who tried to get the ball into the hands of Bud McFerren early and often. Hornets QB Nicholas Farrell had a hand in every one of the Hornets scores, with 5 TD passes and 2 TD runs, and earned our game ball for this game. Comets Chris Lang and Kevin Gray grabbed interceptions  in this fixture.