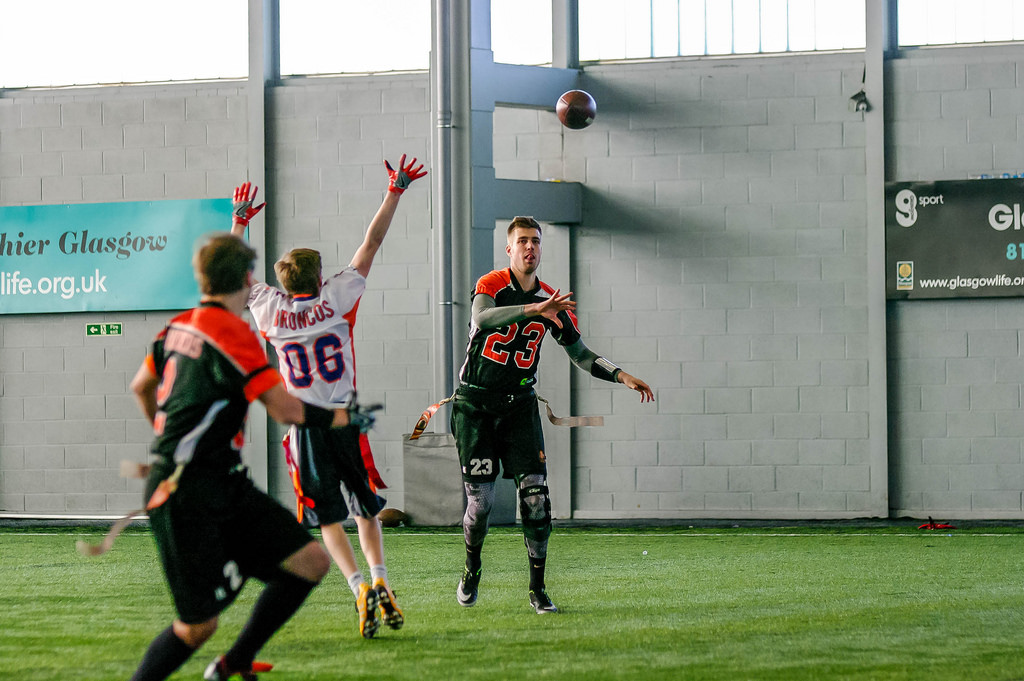 To kick start our Big Bowl countdown, FFW took the opportunity to talk with Walldorf’s Benjamin Klever. Having been around for over a decade, he has represented his National team since 2007, finishing 2nd in the European Championships that year as well as 3rd in 2015. Benjamin has been awarded MVP honours several times, and has lifted the German Championship on 7 occasions.  We caught up with Benjamin about Flag football in Germany and the upcoming 11th annual Big Bowl.

Can you give us some background about yourself and how you got into Football?

I started Flag Football in high school as we got the opportunity to play in a German wide championships, organized by the NFL Europe teams located in Germany. As I went to school in Frankfurt, Frankfurt Galaxy was around the corner, therefore we played various tournaments in their stadium and joined the team for training. After I gathered some experience in school I joined the Walldorf Wanderers, who became part of my home club in Walldorf in 2004. Since then I am part of the great Wanderers family.

As I started playing receiver, I definitely enjoy the fact, that you get so many balls per game. While you get max 10 balls in a tackle game, you get at least 10 per game in a flag game, but you have always at least 3 or 4 games per day/tournament.

Aside from throwing the ball pretty well for Walldorf, what other involvement do you have within the club?

We have been a team classified in a small department in our club for all kind of “alternative sports”. Over the years, we proved a lot, that we are not just a small hobby team as we reached much higher. This year we managed to found our own department where I am acting as chairman for our board. Having worked in the board of the old department as well, this is my second “official” position in the club. Additionally, I am involved in training and tournament preparations.

How many teams do Walldorf run?

The Wanderers consist of a 1st team, which is playing in the German league and a ladies team, which was founded in 2016 and since then, took part in various international tournaments like Den Haag (Pink Bowl) and Big Bowl in Walldorf. We used to have a second team, which is currently not taking part in any tournaments. We are working on establishing a second team again. It might be as well to form a 40+ team end of this year.

We understand the flag football set up is different in Germany as opposed to the UK league structure. Are you able to tell us a little about it?

Flag Football in Germany was always played in a tournament form. Walldorf was for years, the team with the most tournament appearances of all other teams in Germany. Since 2016, there is a German League called 5on5 DFFL which is played all over Germany. You can earn points for playing and winning tournaments in your division and the first 12 teams are invited to the finals day in September. This year the final takes place 23rd of September 2017. The host in not defined yet. The first final in 2016 was held in Walldorf, and the host, the Wanderers, won the tournament.

Which team is your biggest rival in Germany?

Our biggest rival in Germany are by far the “Kelkheim Lizzards”. There were our opponents in last year’s final and nearly in every final we played before. If Kelkheim and Walldorf are participating in a national tournament, the quotes are high, that the final is Wanderers against Lizzards. Despite the fact that the Lizzards are our biggest rivals, there are also good friends. We have played so many games against each other and we always leave the field smiling. This is something which I haven’t seen so often in other sports.

The Walldorf Wanderers are obviously well-known for hosting the biggest flag football tournament in Europe, can you tell us a little about how it started and grew so much?

Last year we saw the involvement of North and South American teams competing, how did they get involved?

Most of the teams which are coming to the Big Bowl have heard of us. We normally don’t do much advertising. Especially contacting various teams was never on our to do list. This is something which makes us proud. People and players all over the world are talking about us. That is the best advert you can get for your event.

There have been quite a few excellent teams involved, including last year’s final teams, Mass-Flag and Copenhagen Fusion. Are there any teams that competed that you thought were on a different level?

I had the opportunity to play against a lot of good players in my career, but by far the Danish and Americans are the best flag football players I met. Sure, football is “the sport” in the US. However, I am astonished about the Danish teams and players which all are I would say on the same level as the American guys.

What are your hopes for this year’s tournament and will there be anything new or different to look out for?

This year we will have the biggest Big Bowl ever. With 65 teams out of over 13 countries, we have reached our limits. The ladies competition was never as big as in 2017. With 15 teams, from 11 countries, we have such an international variety, which is just amazing. Next to this, we will for sure do our best, to make the stay for the teams as enjoyable as possible. A good party, combined with good food, drinks and an organised accommodation is very important for us.

The Wanderers compete in quite a few tournaments including this year’s Flagging New Year (FNY) in Glasgow. Are there any that you really look forward to and what were your thoughts on FNY?

We joined the FNY in 2017 for the first time and we had a blast. Especially the fact, that we have the possibility to play “new” teams, is definitely worth it to travel from Germany to Scotland. The tournament was very well organised and structured. We are looking forward to coming back in 2018.

How do you think the other tournaments compare to Big bowl?

I love to play in tournaments, especially in other countries. In my opinion, every tournament is different and facilitates another flair. I have been to Flag Ocean in Le Havre twice, which was the biggest tournament in Europe before Big Bowl became as big as we are now. Le Havre had a complete different setup compared to Big Bowl. After the Big Bowl weekend is over, I always tell the team, that I once would love to participate in a tournament like Big Bowl. There is so much hard work involved, which starts more or less after the final has been played.

What’s your plans and aspirations for 2017?

In 2017, we want to defend our German League Title. Additionally we are taking part in loads of international tournaments, where our goal will be to reach the final! The title “European Champion” is still missing in my CV. I guess we can play a good role with the national team in Madrid this year. We will see!

FFW would like to thank Benjamin for his time and wish him and the Wanderers all the best for Big Bowl.  Look out for our group previews on Wednesday and Friday to see how the teams match up.

Mean while If you would like to know more about the Walldorf Wanderers, Big Bowl and Benjamin’s flag career, you can find more here.

Alternatively if you are local to Walldorf and interested in training or trying out for the Wanderers: