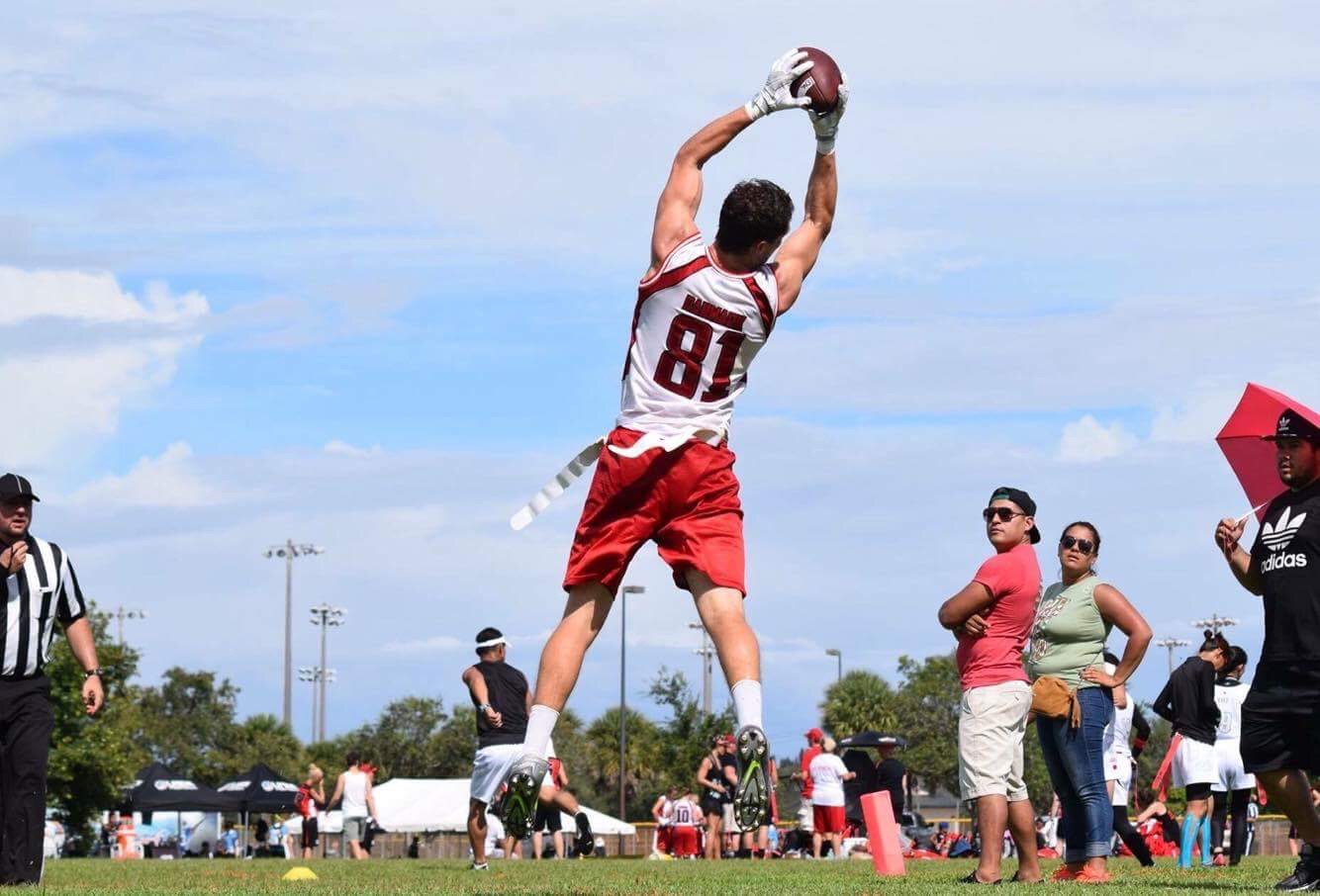 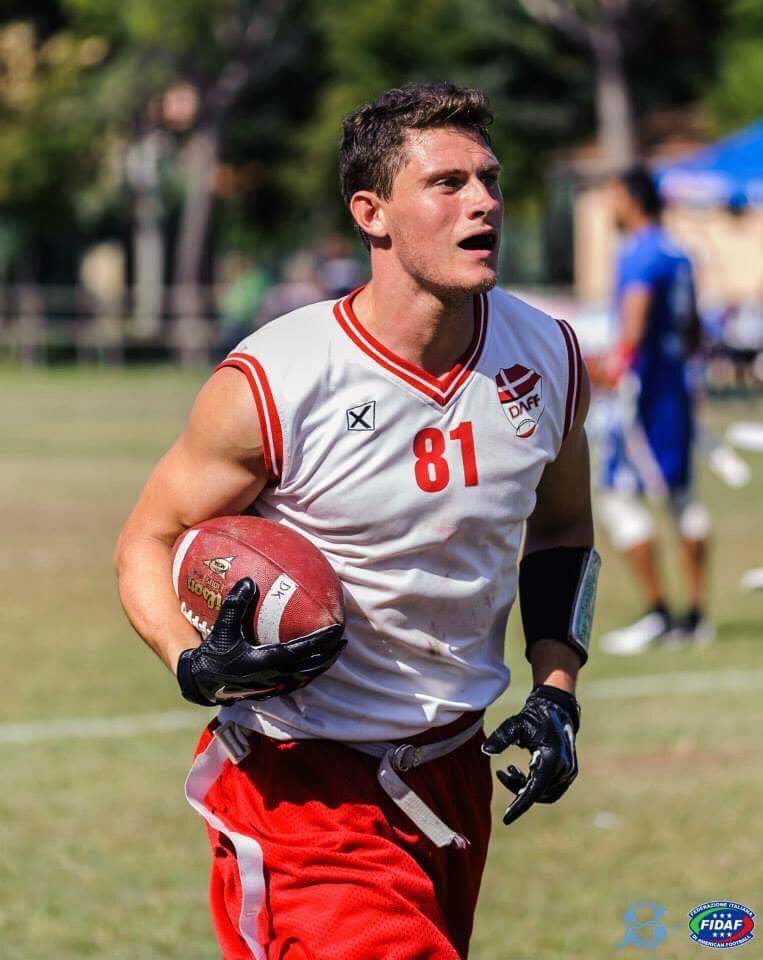 With Champions Bowl this weekend, we took the opportunity to speak with one of the stars of European football that will be showcasing his talent, Jonas Bo Hansen. We spoke about the Danish league, last year’s final at Champions Bowl as well as Denmark’s amazing run in the World Championships.

Jonas, thanks for taking the time to talk to us, are you able to tell us a little about yourself and how you got into football?

I’ve played flag football for more than 10 years. I first participated in a single day tournament with some friends and we were instantly hooked on the sport. So we joined the Danish national flag football league and I have been playing ever since.

I think what I enjoy is that you are so involved in the game all the time. When it’s only 5 vs 5 you are around the ball a lot both on offense and defense. Also it’s very fast paced. When you only play two halves of 20 minutes, you can’t afford to have a down period, because it will be very difficult to get back into the game.

For those that do not know about the Danish league can you tell us a little about the structure?

The structure has changed a bit this year. Normally there has been an east division and a west division and the four best teams from each division would qualify for the playoffs. Unfortunately the west has ceased to exist this year because of a lack of teams. Instead they play some single day tournaments. The east division still exists and carries on with the league structure, where we play a number of game days, which normally consist of games vs two opponents. In the end four teams will get to the playoffs and compete for the Danish national title.

For players that have participated in tournaments abroad they will be familiar with the name Copenhagen Fusion, but what is their history?

Copenhagen Fusion has existed since 2012. The team primarily consists of a group of players from two older teams, the Virum Vipers and Hellerup Haxers, who wanted to play together and thus created a new team. Since then we have had additional players joining our team, including our quarterback Niels Kjær, and what is common for them is that they all have a lot of experience playing flag football. This year we have changed name again to SGD Flag Football

What was the reason for the name change?

This is because we have become part of the tackle football organization Søllerød Gold Diggers. This was a logical collaboration. Three of our players, myself included, already played for the Søllerød Gold Diggers tackle team, and that club wanted to include flag football in their organisation because it’s a great game for the youth players to learn the skills part of the football. For our team it provided some financial backing and hopefully secured the longevity of our team with young players beginning to play flag football through the Søllerød organisation.

Two of the more well-known teams from Denmark are The Armadillos and SGD (formerly Fusion).  What is the rivalry like between the 2 teams and are there any other teams that challenge you in the league?

We have a great rivalry with Armadillos. We know their players from off the field as well and play with many of them on the Danish National Team. Once we play against them it is always super intense games, with a lot of heated talk back and forth on the field. After the game everything is good. The great part about the rivalry is that it has been alternating who has been winning our matchups through the years.

The first couple of years we had the upper hand, but then Armadillos had a very good period with a couple of championships. Last year we were best in our matchups and finally beat them head to head in the final for the Danish national championship. So right now we have the bragging rights again.

Two other very good teams in Denmark are the Herlev Rebels and the Copenhagen Barbarians. Both teams have national team players and Barbarians just reached the final of Big Bowl in Germany.

Last year SGD made it to the final of Big Bowl but were beaten by the Mass Flag All Stars in the final.  How do you think Fusion matched up against the Americans and why did you not re-enter this year?.

Unfortunately our team was not participating in Big Bowl this year because the scheduling conflict for many players. Hopefully we can be back next year for a rematch against the Americans for I do think we played very well against them, especially in the first half of the final. They are just all really good athletes that you can’t afford to make many mistakes or they will take advantage of the opportunities given to them. We made some mistakes and they are too good for that. I think we saw that again this year where they successfully defended their title.

Champions Bowl is also approaching fast; again a lot of people had the SGD down as favourites in their own home, but French side Sphinx de Pau walked away with the trophy last time. Can you tell us about it?

That was a very disappointing game for us. The game had shifting leads throughout, but in the final two minutes we had the lead and also possession of the ball. Unfortunately we didn’t take advantage of that opportunity and the Sphinx, who played a very good final, managed to make the comeback in the end. Since we haven’t participated in the Big Bowl, our focus has been on winning the Champions Bowl this year. We would have loved to get a rematch against Sphinx along the way, but sadly they won’t be there to defend their title.

Denmark is one of the power houses of European Flag Football. How is the National team selected?

An initial training session is held where a mixture of invited players and players who want to tryout for the national teams attend. After that session, between 20-25 players are chosen to compete to get on the final 12-man roster. A number of camps are then held, and the head coach, Kasper Lindén, then has the final say on whom the 12 players will be.

Denmark Recently finished 2nd in the World championships, agonisingly losing by 1 point to the USA. How did you find the tournament and playing standard?

Again, that was a very disappointing loss last year. Back between 2006-2010 Denmark had finished second in the World Championships three times before, so it has been a goal all these years to finish first and we really believed this was the year we would finally be able to take the gold home. It would have been special to do it against USA on their home field. Instead we ended up losing by one point, but I think everybody on the team were very proud of the way we played throughout that tournament.

That was the third time I participated in a World Championship and I feel like the competition is getting better each time. It was a fantastic tournament where we had some memorable games especially vs Mexico in the group stage and, of course, the final against USA.

What were your highlights from Miami?

I think it was qualifying for the final after a close game against Austria, where our offense for the first time in the tournament had some troubles, but our defense stepped up. We knew winning the gold probably meant to beat USA, but that was the opportunity we wanted and played for, so it was a great relief when we beat Austria, because anything but a final would have been a huge disappointment for us.

My personal highlight from Miami came in the final, where I was used on defence, and managed to come up with an interception at a critical point in the game. At that moment I really believed we would win the game.

You were named in the all-tournament team, how did that feel?

That felt great. It’s always nice to get some recognition and especially being named to the all-tournament team at the World Championship next to some extremely talented players.

What are your team and individual goals for 2017 and where are we likely to see you competing?

Our team goal is to win the Champions Bowl this year, and I think we have a good chance with the team we are bringing to Klosterneuburg. Also, we want to defend our national championship title. My individual goal is the same as the team goals, but also to be re-selected for the Danish National Team and defend our European Championship title.

Thanks again to Jonas for taking the time to speak to us and we want to wish him and SGD all the luck at Champions bowl.