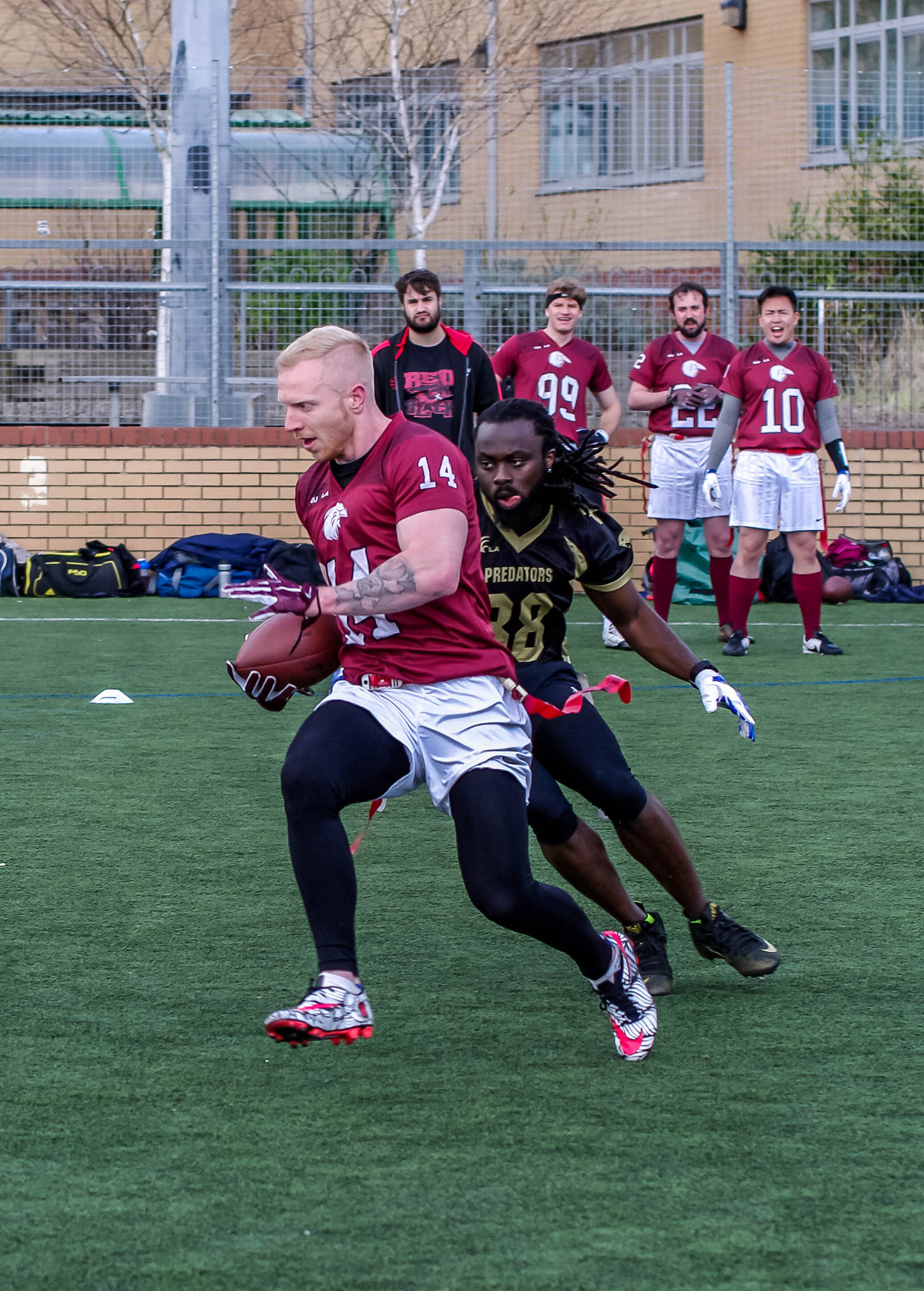 Following a strong showing at the Flag Football World Championships, FFW took some time to speak to Manchester Crows and Great Britain player Matt Wilkinson.  A safety and wide receiver, Matt was named on the 2016 All-tournament team at the Miami Championships.

Can you tell us a little about your background in sport?

I’ve played sport all my life. Mainly playing football (soccer), which I was hoping to go professional in but didn’t make the cut at 16 when it came down to the whole “contract or not” shindig. I’ve also played basketball to a high level, including winning the English Schools National Championship and also represented my county in athletics!

How did you get involved in Flag Football?

I briefly played full contact American football in my late teens before recently re-taking up the sport a couple of years ago at age 23 in the form of flag football. I found this to be a less serious, more fun alternative to the kitted game. Being self-employed, I didn’t want the risk associated with playing full contact football either (despite having sustained a couple of muscle injuries and broken nose in just 2 seasons of flag football)!

Honestly, I love the fashion side of the game, such as matching gloves, cleats etc. and all the cool kits. Call me shallow… I also enjoy playing the actual game from time to time too 😉

You recently represented GB at the world championships in Miami can you tell us a little about how you got involved and how you felt after being selected?

I’d played in the European championships for GB the year before in Madrid, so was an existing member of the squad and just needed to sure up my place on the plane to Miami by performing how I had been doing all season in the training camps. Obviously I was extremely proud to be selected and want to be part of this squad for many years to come.

The GB Lions played some pretty big teams at the Championships such as Denmark, Mexico and Canada.  What did you think of the standard of play in comparison to the BAFA league?

The speed of the game is on a completely different level. Whether that’s the speed players fly around the pitch or the power the QB’s sling the ball with. That coupled with a clear chemistry between opposing QB’s and receivers makes some routes near impossible to cover. This makes for very entertaining, crazily competitive games. Summed up, I guess it’s like the BAFA league on cocaine… can I say that?

Playing some massive teams as mentioned above, was there any that you particularly enjoyed the most?

I enjoy the tense games that have a little friction between the teams. So for that reason I’d have to say the Italy game. That coupled with one of best interceptions I’ve ever made, makes for fond memories. Unfortunately they’re a very good team and we came out second best again. However, we’ve improved massively and I think we’ll beat them this year in the European Championships.

What part of the experience really sticks out for you?

I love the USA; so being able to spend a week in Miami was epic enough for me. Never mind how much fun it was to be playing… It was basically a dream week.

On reflection what were the highs and lows of the Championships for you?

The highs were honestly the whole week, apart from the lows of the journey back home, yuck.

Closer to home the conferences have been shaken up a little this year.  How do you think the Crows will get on and what are they aiming for?

Our aim is to make the playoffs again and then see what happens from there. We’re a quietly confident bunch that has grown from a “nobody” team, to a well recognised and respected outfit.

Nobody specific. I’m going to go with “anybody and everybody”.

What’s your plans and aspirations for 2017?

For the Crows; it’s to keep improving regularly, as we have been doing. Whether that is on or off the field, we have an exceptional brand that I don’t think anyone can argue. Internationally; it’s to make the Great Britain squad again and reach the later rounds in the European Championships.

We understand you are associated with a clothing line.  Can you tell us a little about it?

Basically, I sell gym clothes. Specifically, T-shirts and I think they’re kind of cool. I’m planning on getting some new gear in too this summer, so keep your eyes peeled!

Where can we check out the products?

Should the big brands be nervous?

You are also a Personal Trainer; do you have any flag players as clients?

I’ve trained a couple of guys on my team and I also do a couple of sessions with the team as a whole in pre season and about half way through to keep them on their toes.

We’re not in America anymore, so piss off with your 15% gratuity.