On April 29-30 international flag football descended upon Utrecht for the very first time for the King Bowl tournament. The organizing Utrecht Dominators are a regular visitor at Walldorf Wanderers Big Bowl and competed during Flagging New Year 2017 in Glasgow this January. The tournament started with a group stage, and then progressed into a playoff format, with all final placements up for grabs in games to take place on the Sunday. To make conditions the same for both teams, games were divided in two halves. A centralised running clock and the limited time per game ensured that teams would speed up on offence and look for quick turnovers on defence.

Last month we caught up with the tournament organiser, Ilja Tersteeg, on his motivation for this tournament. This time, we ask him about the tournaments first edition in the books.

Do you feel the tournament was a success? Can you share any plans for 2018?

Looking back I believe it was a bold move for a first edition to go after 18 teams and a two day tournament format. Especially considering the time frame in which everything was set up. Over the years we, as the Dominators organization, have gathered lots of organizational experience. Therefore I had full confidence in our capabilities as a club to pull this off. Without the help of so many sometimes even invisible volunteers this tournament would not have been impossible. They and the participating teams really made the tournament. Although we generally had positive feedback we will definitely improve some things. One big advantage is that we have more time to plan ahead as the dates for King Bowl II are already set, so save April 28-29, 2018. We would like to get 20+ teams in the male/mixed competition, hopefully add some additional countries to the mix, and perhaps even a women’s competition to inspire more Dutch women and girls to give the sport a shot. 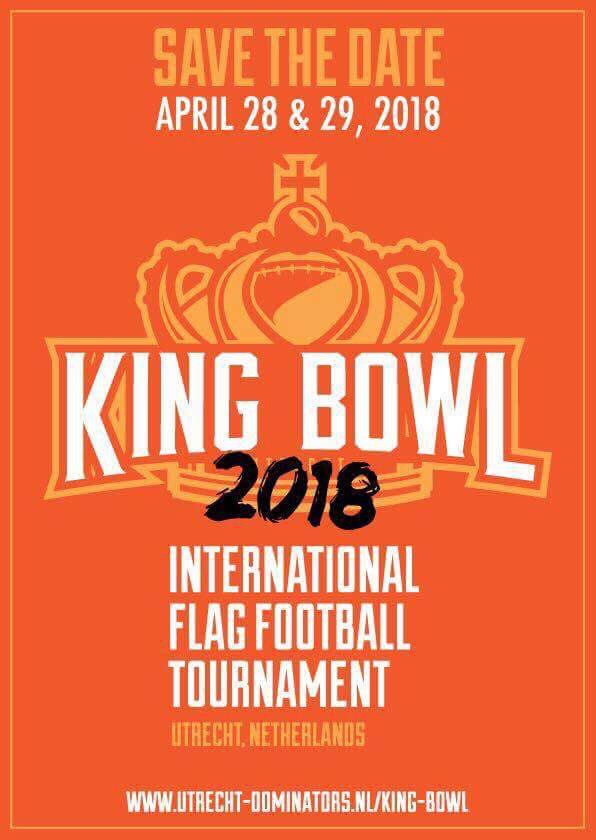 Did you experience a difference between playing at your own international tournament and the ones abroad?

Definitely! It’s completely different. Just participating is definitely more care free. When playing abroad you can just focus on the games at hand and watch others in the spare time. This time it meant that I had to constantly shift my focus from player to organizer. Obviously I wanted us to do well at our own tournament, but a top placement with the team was not a priority. Thanks to our amazing volunteers I was able to get some playing time. Jeroen Peeperkorn who is usually our team manager as well as a player ran a perfect tournament schedule. He unfortunately didn’t get to play because of it. That’s something we will look into for the 2018 edition as well. 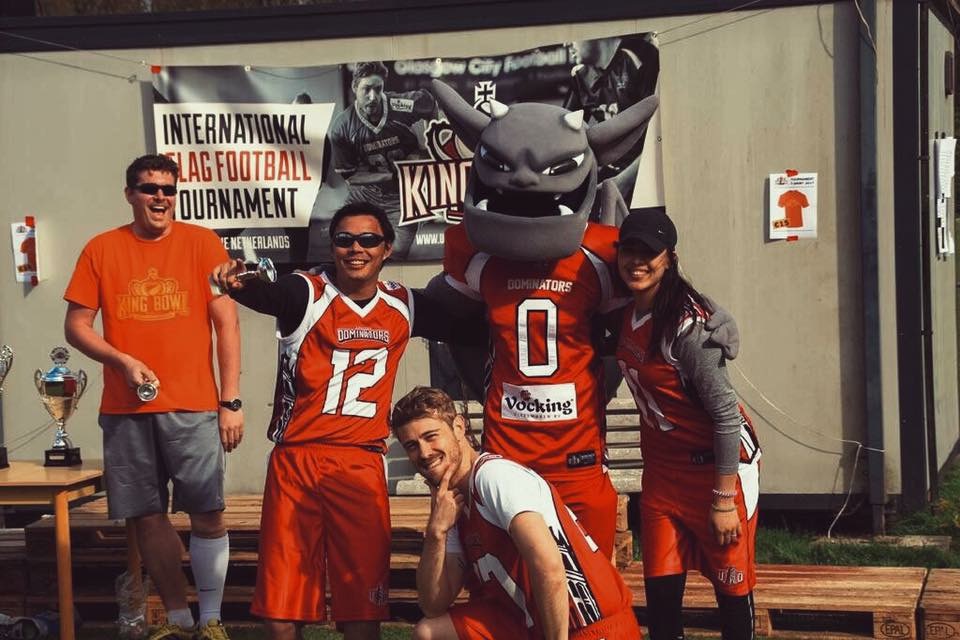 How did the tournament unfold?

The pre-tournament favourites were Netherlands’ Hague Hyenas and USA Mayhem. Both of them would have to live up to the hype of being designated finalist. Some of the foes they would face were familiar, others completely new and unheard of. The tournament also saw a surprise mix of experienced tournament teams as well as newcomers. Mayhem is a household name on the international stage and even though the Hyenas as a team may not, the players are, as most of them also represent the Netherlands as Dutch Lions. On the other hand you had the Cologne Pandas. They are a new start up team from Germany looking for experience. Something they have gained in plenty after this weekend. Another unfamiliar team were Group A’s Warsaw Wombats, all the way from Poland’s capital. Their team and level of play was a big question mark for everybody in their group. They eventually ended up coming in 11th .

The top seed in Group A somewhat surprisingly went to the Mainz Legionaries. They surprised the hosting Utrecht Dominators who then had to beat the solid playing Nancy Tigers in their last group game to secure a tier 1 spot for the placement games. The Dominators managed to win their crucial match up with the Tigers (18-13) setting them up for a quarter final match against the high scoring Coal Miners. Also a previously unknown team to us was group B’s French side Villenueve d’Ascq Vikings. Their quarterback looked the part of a Viking chief as he and his team wreaked havoc in opposing defences and offenses alike. Nevertheless they got knocked to the second tier on day two after losing their crucial group game against Purmerend Barbarians I, 21-18. Hyenas took the number 1 spot with a perfect 5-0 record. Group C was as expected claimed by Mayhem. With them and the Hyenas as top seeds they couldn’t face each other until the finals. The second place in this group went to the prolific Charleroi Coal Miners. They consistently put up close to or just over 30 points on offense.

Oddly enough the quarter final matchup between the Dominators and Coal Miners ended as the lowest scoring game of the whole tournament. The Miners just edged the Dominators (6-0) ending the hosts’ hopes of claiming the first ever King Bowl crown. 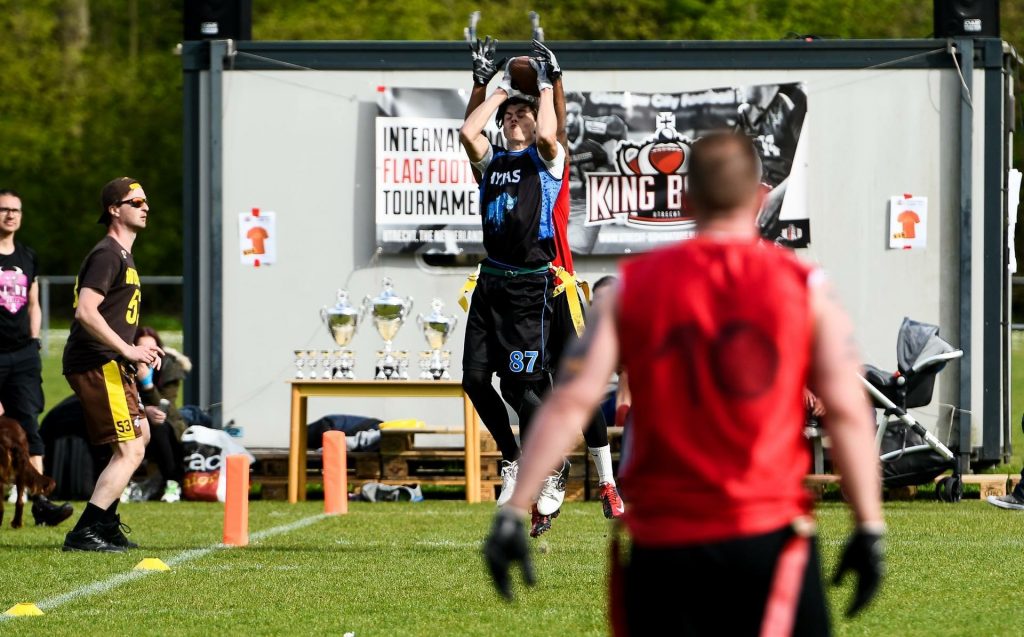 The final came down to two of the early favourites – the Hague Hyenas and Mayhem. Mayhem, led by the legendary Bobby Black, had wowed onlookers with his laser point and no look accuracy. During day one Bobby even converted a behind the back throw for a touchdown. You could tell he was enjoying himself. Meanwhile, the Hyenas, captained by Cliff Dankers, weren’t going easy on anybody. Short passes, athletic runs and plenty deep bombs, they used their full arsenal. Overall they looked to hold a slight edge over Mayhem due to their chemistry on both offense and defence.

A back and forth battle ensued, with both offences knowing that every possession was vital. Neither team was able to pull away. The big difference in the end turned out to be PAT conversions and some last second drama. Where the Hyenas managed to convert most PAT’s, Mayhem didn’t. This meant that even after going up 20-24 in the final two minutes the Hague still had a shot at the win. With time nearly expiring they went for it. A deep ball down the side-line got caught and the receiver looked to fall into the endzone. Yet the linesmen marked him short. What happened next is still unclear. It looked as time had expired during the last play. Nevertheless the referees, after some debate amongst each other, allowed the Hyenas to get off one last play. This could be due to a possible defensive penalty during the last play, as coverage was very tight, but no flag was thrown. That final short pass was caught ending the ball game and thus crowning the Hague Hyenas as the first ever King Bowl champions. All said and done it was a highly entertaining final with a somewhat controversial ending in favour of the Hyenas 27-24. 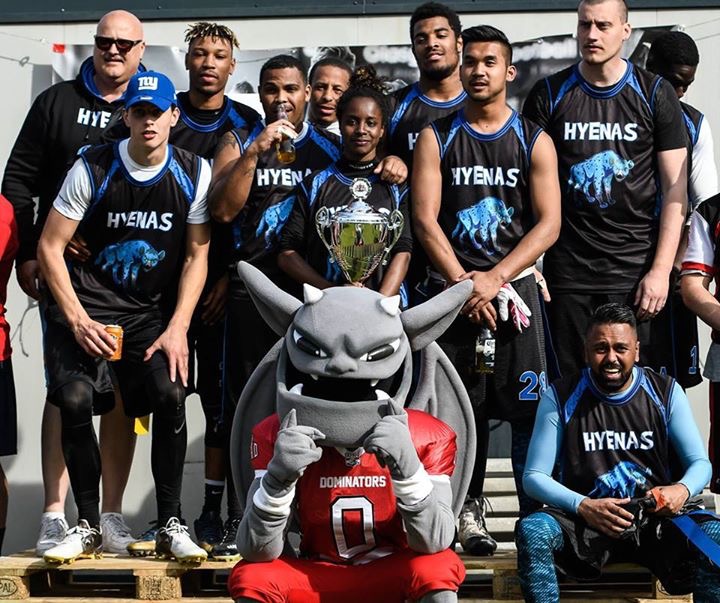 Thanks Ilja, and congratulations on a very successful tournament! We can’t wait for the 2018 edition already! 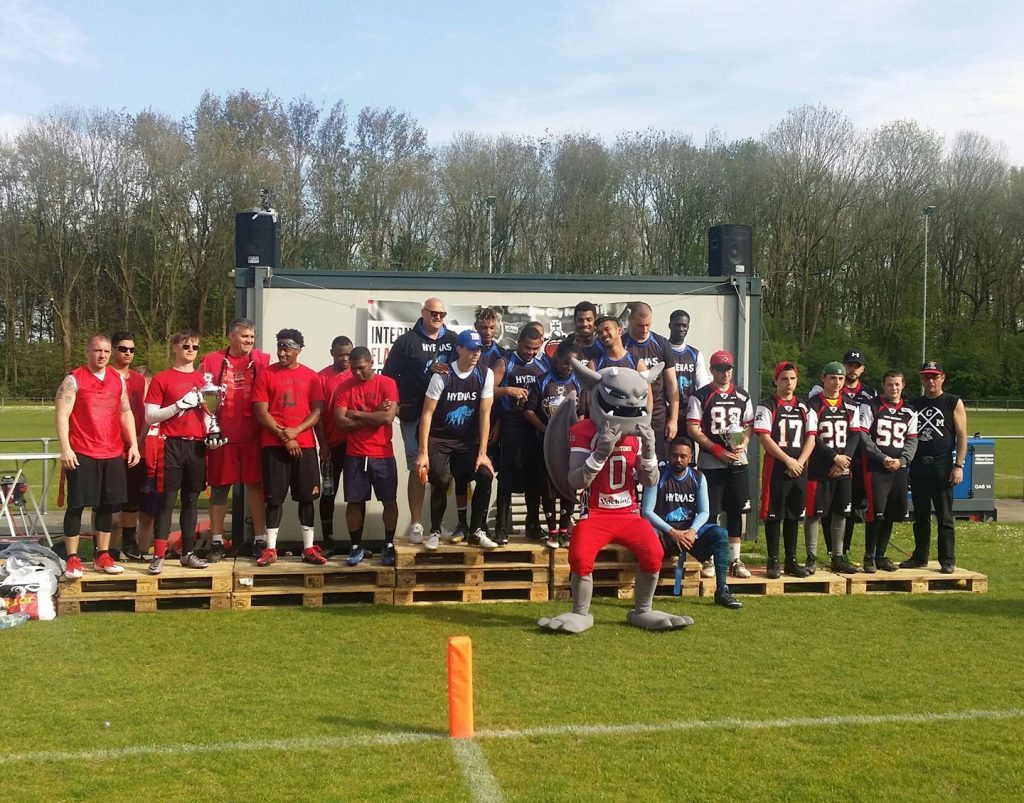 We managed to speak to Christiaan Dankers HC of the Hyenas.

Congratulations on winning the tournament, Having played at Big Bowl, FNY and Pink bowl how did this one compare?

Big Bowl is The Biggest and FNY & Pink bowl where bigger tournaments with higher level teams than King Bowl however it is the Utrecht Dominators first time running an international flag tournament. Setting up a competition like this is always difficult and you hope to get as many teams as possible so they have done very well for it to be their first time

What did you think of the standard of the teams?

The Level was not as high as Big Bowl and Pink Bowl but I remember very well when we started Pink Bowl for the first time we also had few top teams. Pink Bowl has grown each year to a higher level, so hopefully this also will happen with the King Bowl and get to a high-level international flagfootball tournament in the Netherlands.  This may be an ideal tournmamnt for teams in Europe that are maybe not so big but want to experience international football however hesitate currently because of the prestige of the bigger tournaments such as big bowl.

It was a close final, how did you feel it went?

It went well we had a few drops which meant The Mayhem could come back into the game and with 2 minutes to play mayhem took over the lead. Bobby left 30 seconds on the clock for us, just enough for a deep pass that brought us the victory!  The luck was on our side this time, all in all a good, exciting and sporting Kings Bowl final.