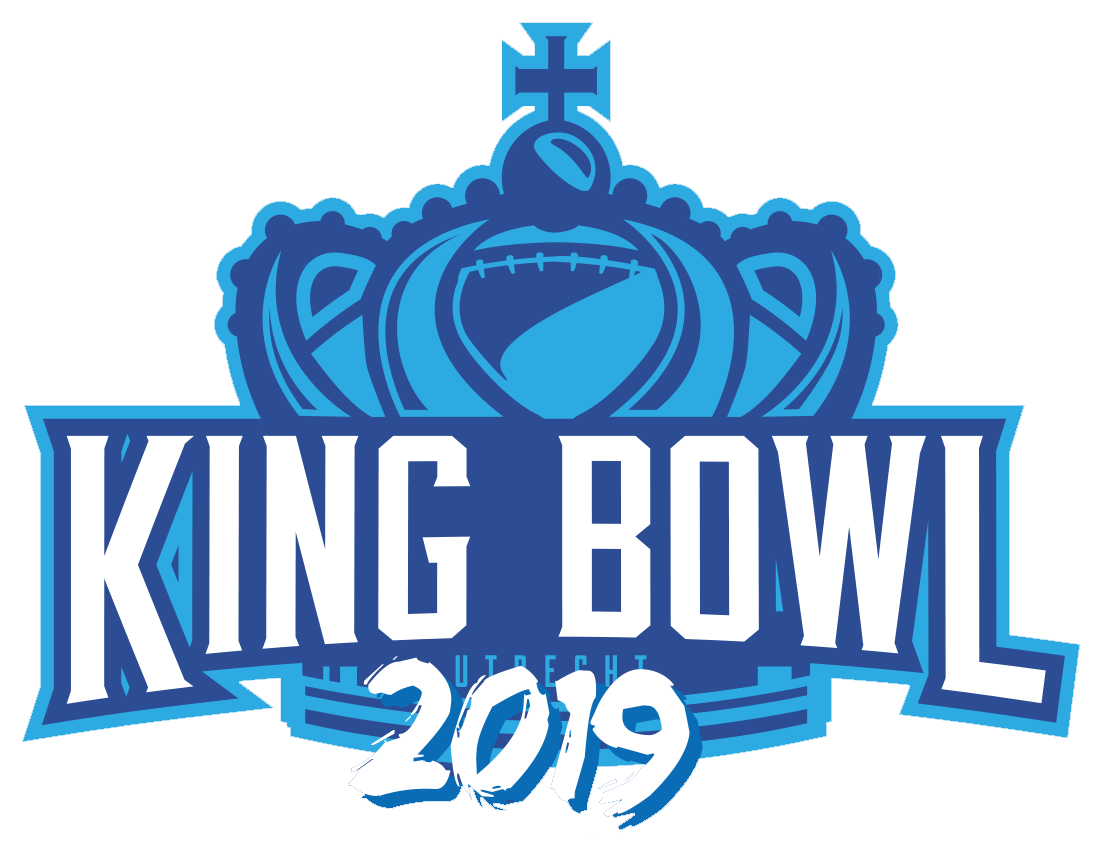 King Bowl returns for its third outing on May the 4th and 5th of June! Having now become a staple addition to the flag football calendar in Europe, we’re now seeing the number of teams attending of the event rise again! In addition, the organisers at the Utrecht Dominators have managed to strike a deal with the Texas based football manufacturer Team Issue as the official tournament ball supplier. They offer teams the ability to pick their own leather, shape, stripe and lace options and foil stamp the team logo on it. As a result the tournament will be played with unique King Bowl footballs, some of which will be given away after the tournament.

With the 2017 and 2018 champions Hague Hyenas and London Smoke both here, we’ve got the most competitive field to date. London Smoke went on to win the 2018 King Bowl after edging the Mainz Legionaries during the finals. In order to claim a second crown both teams will have to fend off some stiff competition

So, let’s have a look at who will be their main challengers to claim another crown.

Last year’s King Bowl champions came from Group 1. This year that might just happen again as it holds two powerhouse teams in German champions Walldorf Wanderers and the highflying Kaiserslautern Eagles. The Wanderers had a banner 2018, winning Flagging New Year and putting in strong shifts at Sportmonda Bowl and their own Big Bowl. With their group at Big Bowl looking like a possible early exit, we can see them targeting King Bowl as their biggest triumph of the year…

However, with the announcement of the Wild Hogs pulling out, we understand that a group of their talented cohort will join the Eagles. In 2018 the Eagles looked like an early favourite, but their small squad meant their efforts fizzled out. With more talented players in their ranks, we think they can go forward this year and mount a more serious challenge.

We’re gonna take the Wanderers to win this group, with the Eagles one loss behind them.

With the top two spots taken we expect the hosting Utrecht Dominators, the Villeneuve Vikings and Torino Minotauri to fight for the #3 spot in this group. The Vikings have tournament experience, and the Dominators are technically hosting, but those duties may distract them. We’ll give third spot to Torino.

Last year’s rising star and King Bowl 2018 runners up Mainz Legionaries will be looking to go a step further, and definitely have the talent to do so. They’ve been handed a tricky group with somne dangerous foes during the group stage as they face last year’s #5 London Stormers and the #5 team from Denmark, one of Europes strongest flag football nations, the Valby Royals. We look to the Dutch side Wolfpack and German Uni Vechta Dragons to perhaps shake things up. The Monkeys with Attitude could pose a threat if they are successful in their quest to recruit Chad Ochocinco.

After missing last year’s King Bowl due to a scheduling conflict the Hague Hyenas are back and eager to claim their second crown. They’ve got a settled squad of winners lead by Cliff Dankers. They do have a nasty habit of imploding against some weaker teams though.  However we expect them to be a candidate to go all the way but to do so they will have to fend of last years surprising #3 Carnegie Flag football and the Danish Copenhagen Scumbags. Carnegie have a couple of ringers in their squad (as is tradition), so chemistry could cost them at a chance to progress. The strong Purmerend Barbarians will fancy their chances to claim one of the top spots behind the Hyenas in this group.

The Champs finally make their appearance in fairly straight-forward group four. The London Smoke just got home after testing their dangerous combination of rum and air-raid assault against some top teams in Mexico. Of all the top teams the Smoke look to have the easiest road to the final eight. The Smoke are one of the most dangerous sides in Europe, with speed and guile at every position on the field.

This means that a bunch of teams will eye the #2 spot in this group. The Lazar Wildhogs were penciled in but as mentioned they have pulled out meaning a last ditch entry for the Rebel Dukes. This side figure to be comprised of some UK Dukes alums and London Rebels – who will all have familiarity with the Smoke. They might push them far, but the manner of their inclusion in this tournament has us doubting their chances of really overtaking the Smoke.

The rest of the groups have some unknown quantities – we know the Manchester Titans well, and figure to be stronger with David McInally in the squad. They might push for second, but they’ll probably just be happy with some beer and some football. 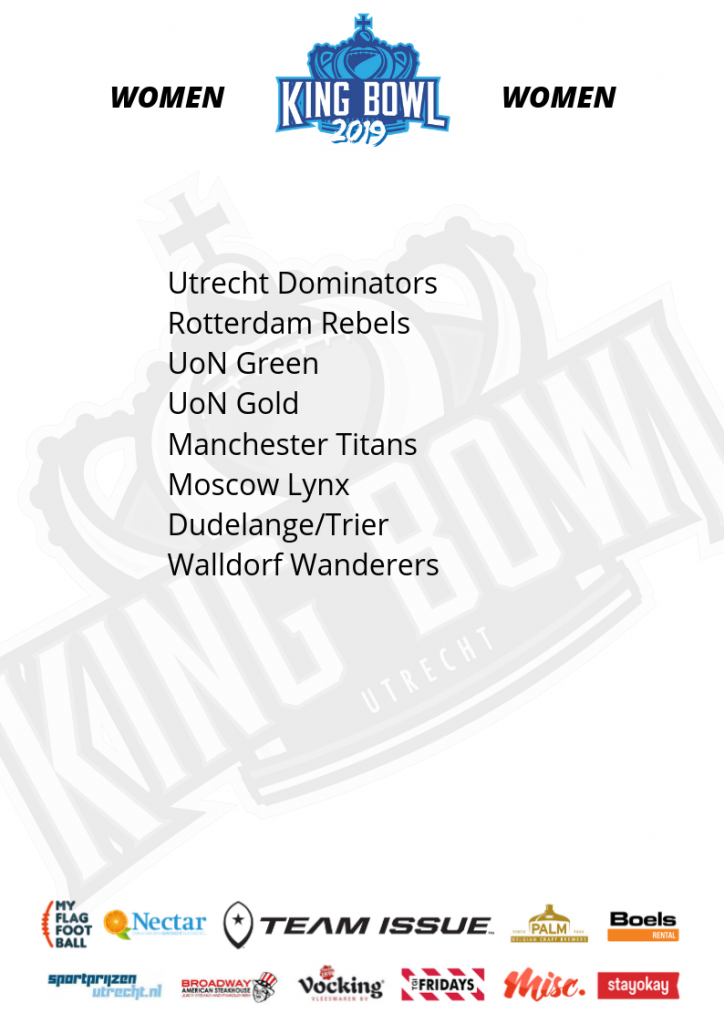 We’re delighted to see more women’s sides taking the field at King Bowl 2018. Last year we saw a very truncated bracket, but we’ve got more sides to consider this year.

The Dudelange Steelers made their debuts last season and suffered some heavy losses. They’ve had another year of development under them, but we can’t see them making much noise. Similarly, the Manchester  Titans have only recently resurrected their flag program so middling results. Testing themselves against some of the top sides in Europe should serve them well for the Opal series later in the year. The University of Nottingham sides both developed well last year, and are making their first foray into Europe. The interesting decision to keep the squads separate could serve to improve chemistry, but we’re left wondering if a combined effort under one banner might have been enough to win the whole thing.

The Dominators made the final last year, but don’t let that fool you – the real final was the semis between the Red Foxes and East Kilbride Pirates. Speaking of the Red Foxes, they enter this year under the guise of the Moscow Lynx. With strong coaching and athletes, they’re our tip to pick up their second King Bowl crown. The Walldorf Wanderers have strong tournament pedigree, but haven’t put it together to date.

Good luck to all the teams this weekend!