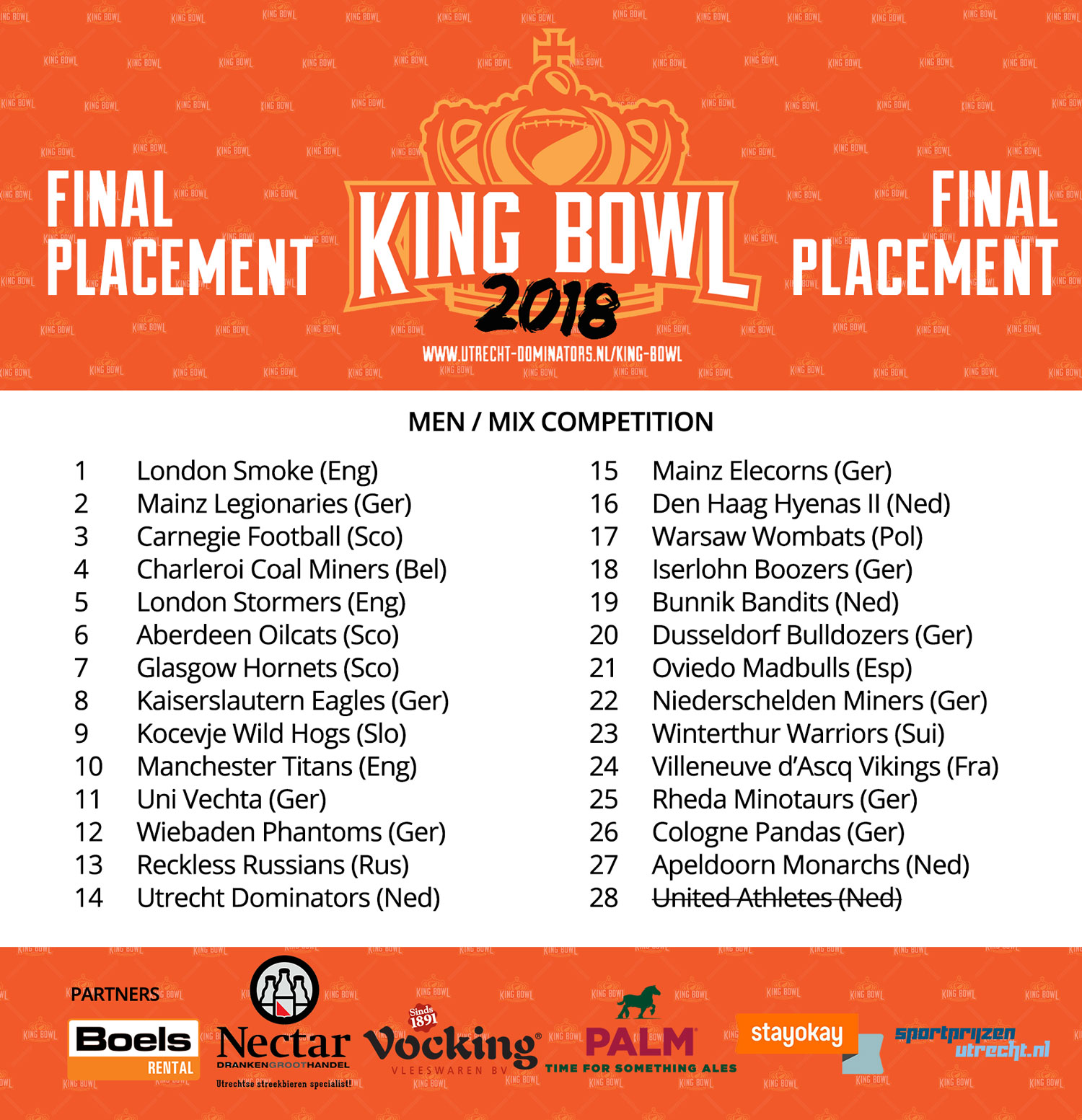 During the weekend of April 28-29 Utrecht was trying to sober up after the wild King day Celebrations and some decided to do so by participating in the second edition of King Bowl. The tournament has grown incredibly and nearly doubled its entrants, going from 18 to 28 men/mix teams. In addition there was a mini ladies competition taking the total to 32 teams from 13 different countries.

How did the tournament unfold

We nailed the womens tournament predictions in our preview with The Dominators women fielding a team in collaboration with Villenueve Vikings, Oviedo Madbulls and Dusseldorf Bulldozers going undefeated during the group stage. Yet it was the Red Foxes who won the most important games of the weekend. After being between in their 2 group games they finally downed the EK Pirates in dramatic fashion during the semi’s. The Pirates looked to go through as they went ahead with less than two minutes on the clock, only to get beat by a deep pass and freakish play seeing the Red Foxes run away with the victory.

During the final it was basically all the Foxes as nerves looked to have gotten the best of the Dominators ladies, who also lost their top receiver to a hamstring injury earlier. As a result the Russians cruised to the King Bowl 2018 ladies crown.  Arguably it was the Dudelange Steelers, Luxemburg’s first and only flag football team, who won most this weekend. Despite not winning a game the Steelers ladies gained a ton of flag football experience.

London Smoke and Mainz Legionaries lived up to the expectations as Carnegie Football was the weekend’s biggest surprise. Our top 4 predictions seemed spot on after day 1 as all the predicted top finishers made it into the top 8.

Mainz Legionaries eliminated the solid playing Aberdeen Oilcats in dramatic fashion, up until then the Oilcats had far exceeded expectations coming into the tournament with somewhat of a shoe string squad. After a 4 PAT shoutout series in the quarterfinals it was the Legionaries who marched on. Mean while the London Smoke eliminated another heavy tournament favourite, the Kaiserslautern Eagles. The Eagles only travelled with 5 players and didn’t seem to be completely healthy during day two. They eventually lost all placement games, thus finishing 8th with the final blow coming from the surprise 7th finishers the Hornets.

Glasgow had entered this tournament as one of the clear favourites and looked to go all the way after winning all their group games soundly, only letting 7 points defensively.  However a mixture of aweful weather, dubious referring and unusual errors from both defence and offence led to a quarter final exit to the Coal Minors. Another Scottish outfit, Carnegie surprised everyone by making it out of their group with ease and finishing 3rd only going down to eventual the rolling London Smoke.  Carnegie fielded 3 of there own players and added an excellent mix of Grangemouth broncos and Edinburgh outlaws to make quite an impression on the tournament as they took down the Stormers and the coal minors for a 2nd time to more than earn their podium finish.

It would come down to the smoke and Legionaries in the final and Early on it appeared to be a one sided affair as the Smoke went up early. Yet it were the Legionaries who clawed their way back into the game and one wonders what would have happened if they would have had another possession. The London side realized this as well as they started to run plays with the sole intent to kill the remaining time and secure the King Bowl 2018.

The Utrecht Dominators would like to thank all the participants and remind everyone that King Bowl 2019 will be held in May 4-5. The Dominators intent to build the ladies side of the tournament and allow up to 32 men/mix teams to participate. Registration will open in October.